“The Defense Ministry of our country has already shared its professional review of the reckless actions of the British navy destroyer in the Black Sea. I would like to add that we view it as a crude provocation by the UK which runs counter to international and Russian law. I also inform that the British ambassador will be summoned to our Foreign Ministry,” Zakharova said.

Update (1047ET): BBC’s defense correspondent, Jonathan Beale, was conveniently on the HMS Defender when more than “20 aircraft in the skies” swarmed the warship after it allegedly crossed into Russian territorial waters near Crimea.

BBC correspondent Jonathan Beale, on board the HMS Defender, says he heard shots fired but believed they were ‘out of range.’

Russian jets can be heard in the background buzzing the British warship as Jonathan Beale gives his report from the HMS Defender’s deck. pic.twitter.com/TJ0YTQGNaE

Update (0930ET): Bloomberg reports that the UK says its HMS Defender did not breach waters claimed by Russia in the Black Sea, following contradictory statements from the Russian Ministry of Defence.

As we noted before, the UK nor NATO recognizes Russia’s claim to Crimea.

Tensions are heating up between NATO and Russia in the Black Sea Region as a Russian patrol ship fired warning shots near HMS Defender, a Royal Navy Type 45 air defense destroyer, for violating Russia’s maritime borders, according to Russian state-owned news agency RIA, citing the Russian Ministry of Defence.

During the incident, Russia fired “warning shots” from a patrol boat and dropped bombs from an attack aircraft to deter the British Navy destroyer. Here’s a timeline of what happened Wednesday afternoon:

At 1152 local time, HMS Defender sailed across “the Russian border and entered the territorial sea at Cape Fiolent for three kilometers,” RIA said.

Around 1206 and 1208, the Russian patrol ship fired warning shots. The Defender failed to heed radio warnings after it entered Russia’s territorial waters off Crimea.

After nine minutes, a Sukhoi Su-24 attack aircraft dropped four bombs in waters near the British vessel. The Defender then reversed course after the bombing and exited the area.

The incident area occurred south of Russia’s naval base in Sevastopol. 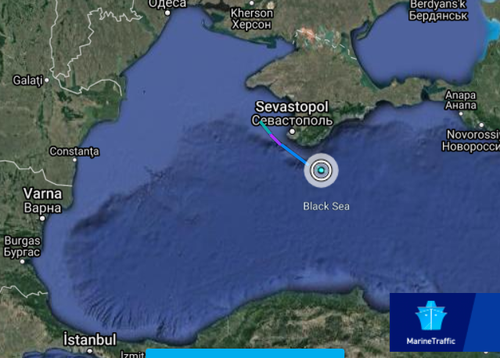 After the incident, Russia summoned British officials in Moscow to explain what happened, Interfax reported. It’s critical to note that the UK and its NATO allies don’t recognize Crimea as Russian territory after Moscow annexed Ukraine in 2014.

UK’s Ministry of Defence Press Office denies “warning shots were fired at Defender.” They said, “we believe the Russians were undertaking a gunnery exercise in the Black Sea and provided the maritime community with prior warning of their activity.”

If, in fact, Russia used live ammunition to deter a NATO vessel, it would be the first time since the Cold War.

Russia has frequently blamed NATO countries for destabilizing the Black Sea. Despite NATO members Bulgaria, Greece, and Turkey all have territorial claims to the body of water.

Unconfirmed reports suggest a “US intelligence-gathering aircraft” was in the region “possibly to gauge the nature of the Russian response to the UK’s violation of the Russian territorial waters.”

Before the incident, the Defender was in the Black Sea to sell warships to Ukraine.

It was a privilege to host Minister for Defence Procurement @mp_quin and Deputy Defence Minister of Ukraine for the signing of a significant Memoranda of Implementation witnessed by the First Sea Lord @AdmTonyRadakin @UKinUkraine #CSG21 #GlobalBritain #StrongerTogether pic.twitter.com/3NQYza8WVV

*This story continues to develop…