The US Dollar faded 3.5-month highs on Tuesday morning as Treasury yields dipped, allowing more riskier currencies to rise. The latest surge in the dollar has put it at an important crossroad after stabilizing in the last three months around the 89-90 level.

With dollar shorts under strain, the latest Commodity Futures Trading Commission data ending Mar. 2 shows the short dollar trade is widely overcrowded. The chart below is relatively important but doesn’t cover the real FX market, i.e., FX futures markets but does represent a sizeable short in the dollar. 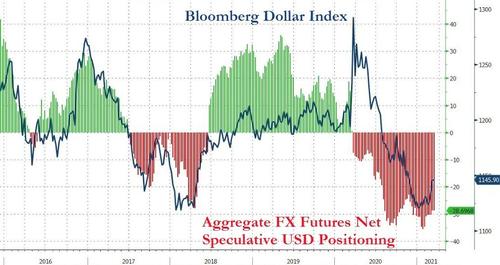 The dollar’s latest push higher has put bears under pressure, especially since the monthly 200 exponential moving average (91.355) has been breached to the upside with the 23.6-Fib (92.319) in a test. 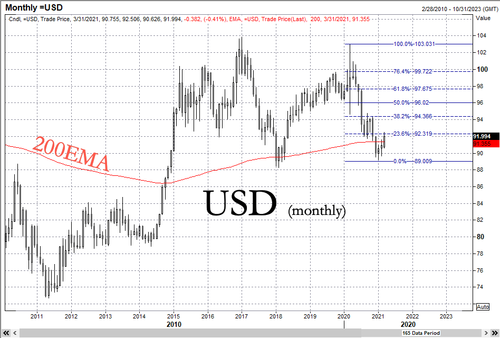 Even though the dollar has slumped Tuesday along with Treasury yields, falling to around 1.54% on 10Y, yields could rise further this week as the market will have to digest $120 billion auctions of 3, 10, 30-year treasuries. After last month’s abysmal 7-year note sale that spiked yields and dollar.

“Stability is likely to remain the theme of the day ahead of the UST auctions and the US inflation release tomorrow, which are the near-term risks for FX markets (given the possible negative spillover into USTs and the risk of a further sell-off),” ING strategists Chris Turner, Francesco Pesole and Petr Krpata wrote in their daily note.

And should this occur, it would not be welcome for the equity markets due to the negative correlation between the dollar and stocks. Most importantly, a surging dollar, with rising interest rates, could put a severe dent in the “reflation trade.”

However, bear in mind that trading the dollar in FX markets is merely betting its the best-looking – or worst – horse in the glu factory of fiat finance… 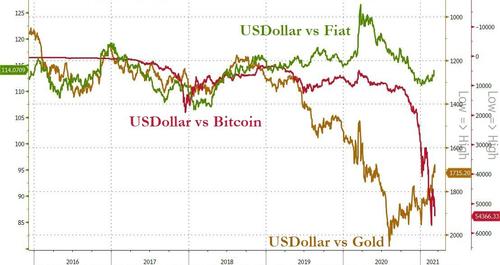 We suspect ‘alternative currencies’ may be a better longer-term signal for where the dollar ends up, but counter-trend rallies against its currency peers are obviously tradable.