Travel chaos impacted thousands of Americans trying to catch a flight during the Father’s Day and Juneteenth holiday weekend.

Flight tracking website FlightAware shows more than 10,000 flights were delayed or canceled nationwide between Friday and Sunday due to pilot shortages and bad weather, which comes days after top airline executives spoke with Transportation Secretary Pete Buttigieg about how to resolve flight disruptions.

“That is happening to a lot of people, and that is exactly why we are paying close attention here to what can be done and how to make sure that the airlines are delivering,” Buttigieg told The Associated Press in an interview Saturday. 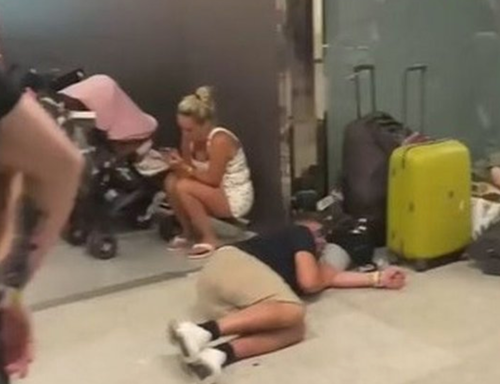 Buttigieg said he could penalize airlines that fail to meet consumer-protection standards.

According to data from the Transport Security Administration, passenger throughput at U.S. security checkpoints at airports topped nearly 2.4 million on Friday, the highest checkpoint volume since the Sunday after Thanksgiving and 100,000 more travelers than the Friday before Memorial Day weekend. 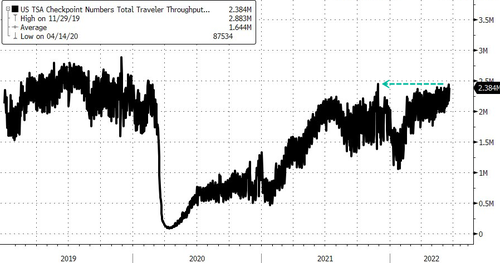 Constant flight disruptions are caused by staffing shortages, bad weather, and reduced flights and come at a time when airlines can barely keep up with demand.

The origins of the shortage began in the early days of the virus pandemic when pilot hiring, training, and licensing came to a standstill. Then airlines forced thousands of pilots into early retirement to reduce labor costs as travel demand cratered.

“The pilot shortage for the industry is real, and most airlines are simply not going to be able to realize their capacity plans because there simply aren’t enough pilots, at least not for the next five-plus years,” Kirby said.

Kit Darby, a pilot pay consultant and a retired United captain, warned that “there is no quick fix” for the pilot shortage.

19k flights have been canceled/ delayed since Thursday. 4,200 flights were delayed, 900 canceled on Sunday alone due to shortages in skilled positions!

Biden Admin mandated vaccines for pilots/personnel, many of whom either quit or were fired for refusingpic.twitter.com/ImnEIrI7Di

Over 10,000 flights were canceled across the US this weekend. That reflects a state of chaos in the airline industry. Biden w/his mandatory vaccinations or firing caused the airlines to have staff shortages b/c they were forced to furlough or let go of workers in the thousands. pic.twitter.com/x0QuK7OAnK

Thanks @Delta I have been up since 6am Sunday and we had to stay at the Atlanta airport since the flight to Little Rock was canceled at 11:30 p.m. By the time we found a new route going through customer service it was 2am, no hotels were available through you. Do better. pic.twitter.com/0ljmBtDGJY