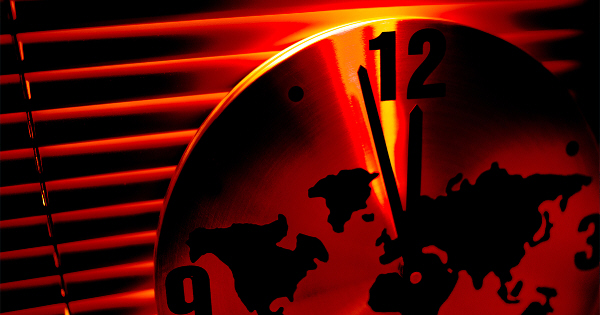 7 Things That Used To Be “Crazy Conspiracy Theories” Until 2020 Happened
Remember back in the old days of, say, 2019, when anyone who talked about microchip implants, Americans being forced to show travel papers, and re-education camps was thought to be a crazy conspiracy theorist? And then 2020 rolled around and voila! It turns out those conspiracy theories weren’t so “crazy” after all. We’re living in a time when someone will attempt to beat the crap out of you, burn your house down, or even kill you if you voted for the “wrong” presidential candidate. We’re being subjected to curfews, our movement is restricted, and our businesses have been forcibly shut down. One day, people will look back on this as the year that everything changed – or depending on how Americans respond to the mandates – the year we finally said enough.

“They Think You’re Stupid!”
“They think you’re stupid” – which covers “The Great Reset” and the “Great Cover-Up about the Great Reset.” Along the way, Watson torches just about everything that the elites are raining down on the masses, all courtesy of the extremely beneficial Wuhan virus. Sure, the virus killed people (although I think it’s clear that, at least in America, mortality numbers have been inflated for political ends). But for the left, the virus has been an extraordinary blessing, allowing leftists to exert unimagined control over people, enrich themselves, and shift large sections of America into the government dependency category.

Jerusalem’s Tower of David is Being Restored
Israel is taking the opportunity with no tourists in town to do restoration work on a number of tourist hotspots. One of the largest projects is the restoration of Jerusalem’s Tower of David. A whopping $40 million has been budgeted for the renovation and expansion of the museum housed in the historical structure, and the Israel Antiquities Authority is overseeing excavations being carried out as part of the process.

China Pushing For A Global COVID QR Code To Track Travel, Limit Exposure To Coronavirus
Speaking at the virtual G20 leaders’ summit Saturday, Xi said that nations need to “harmonize policies” to track those infected with the coronavirus, according to a transcript of Xi’s speech from a state-run news agency Xinhua. “China has proposed a global mechanism on the mutual recognition of health certificates based on nucleic acid test results in the form of Internationally accepted QR codes,”

Appeals Court Grants Expedited Review of Trump Campaign’s Pennsylvania Lawsuit
President Donald Trump’s campaign on Monday secured a legal win after the U.S. Third Circuit Court of Appeals granted an expedited review of their appeal from a Pennsylvania court, according to Trump campaign lawyer Jenna Ellis. According to the order, Trump’s “motion for emergency expedited review is granted at the direction of the court.” Their brief now needs to be filed by 4 p.m. on Monday, Nov. 23. “The court will advise if oral argument desired,” it said.

Federal Court Rules Bans on Gay Conversion Therapy Are Unconstitutional
In a 2-1 decision, the 11th U.S. Circuit Court of Appeals threw out bans imposed in Boca Raton, Florida, and surrounding Palm Beach County on the treatment, in which gay or transgender individuals are counseled to accept their biological identities and sexual orientations.

Why has the US sent B-52s back to the Middle East? – Analysis
The B-52s have been sent to the region as the US appears to be drawing down forces in Iraq. The Pentagon has said that hundreds of troops are leaving Iraq and Afghanistan.

Did China Adopt “Flesh-Rotting” War Tactics From Book of Zechariah?
A smoldering mountaintop conflict between two nuclear-armed nations turned apocalyptic with claims that China used a never-before-used “non-lethal” weapon that cooks its victims from the inside out. The confrontation in the Himalayas took a disturbing turn this week when India accused China of using microwave weapons against its soldiers.

IMD Warns Of ‘Cyclone Nivar’ Making Landfall In Tamil Nadu’s Mamallapuram On November 25
A low-pressure belt forming over the Bay of Bengal is likely to turn into a cyclonic storm, which is expected to make landfall between Karaikal in Puducherry and Mamallapuram in Tamil Nadu on Wednesday, November 25. The Indian Meteorological Department (IMD) said the cyclone named Nivar is likely to bring heavy to extremely heavy rains to parts of Puducherry and Karaikal.

Netanyahu to follow Saudi visit with Bahrain trip
Prime Minister Benjamin Netanyahu on Tuesday announced plans to travel to Bahrain in the aftermath of his unusual visit to Saudi Arabia, a country that has no ties with Israel. As a sign of Netanyahu’s deepening relationship with regional Arab leaders, Netanyahu said he had spoken Monday with Bahraini Prime Minister Crown Prince Salman bin Hamad bin Isa Al Khalifa.

US Air Force tests new B61-12 nuclear gravity bomb with F-35A
The US Air Force, in cooperation with Sandia National Laboratories, has successfully completed a round of flight tests integrating the new B61-12 nuclear gravity bomb onto the F-35A Joint Strike Fighter. Though the test took place over the Tonopah Test Range at the Nevada Test and Training Range on August 25, the video of the test was only declassified on Monday.

Israel and PA push for control of West Bank’s Area C via land registration
The Israeli Right has sought to solidify its hold on the West Bank’s Area C through a formal property registration process, which they have pressed the IDF to execute, partly to oppose the Palestinian Authority’s registration of the same territory, the Knesset’s Foreign Affairs and Defense Committee was told on Monday.

Covid: Vaccination will be required to fly, says Qantas chief
International air travellers will in future need to prove they have been vaccinated against Covid-19 in order to board Qantas flights, the airline says. The Australian flag carrier’s boss, Alan Joyce, said the move would be “a necessity” when vaccines are available. “I think that’s going to be a common thing talking to my colleagues in other airlines around the globe,” he said.

Taiwan to protect sovereignty with new submarines amid China tensions
Taiwan President Tsai Ing-wen on Tuesday vowed to defend the democratic island’s sovereignty with the construction of a new fleet of domestically-developed submarines, a key project supported by the United States to counter neighbouring China. Taiwan…has been for years working to revamp its submarine force…

Turkey summons EU, German, Italian envoys over vessel search bid
Turkey has summoned the envoys to Ankara of the European Union, Germany and Italy to protest against a German attempt to search a Libya-bound, Turkish-flagged commercial ship, according to the foreign ministry. The move on Monday came hours after Ankara accused the German navy of conducting an “unauthorised” search on the Roseline A freighter.

Egypt joins major Arab military training exercise with KSA, UAE
Egypt has joined a major military training exercise involving Saudi Arabia, the UAE, Jordan, Bahrain, and Sudan. The Saif Al-Arab combat activities will continue until Nov. 26… Over recent days, forces and equipment of the participating countries have been arriving at airbases and seaports under strict precautionary measures taken to stop the spread of the coronavirus disease (COVID-19).

Doctors ask people to sign ‘do not resuscitate’ orders to limit Covid pressure
People with pre-existing conditions that make them especially vulnerable to coronavirus complications are being asked to sign “do not resuscitate” orders by Swiss doctors. People who are over 60, for example, and those suffering from heart disease or diabetes, have been urged to sign the orders to ease pressure on intensive care units.

Massive floods hit Israel after one of the rainiest days in the country’s history
Dozens of people were rescued in several parts of Israel after exceptionally heavy rains triggered severe flooding from Friday, November 20 through Sunday, November 22, 2020. Up to 230 mm (9 inches) of rain fell in some parts of the country in just 24 hours, surpassing the average for the month of November of 70 mm (3 inches). Heavy rains came after a completely dry October.

The Great Relocation: Americans Are Relocating By The Millions Because They Can Feel What Is Coming
This is a really odd time to be having a “housing boom”…

Gati is the strongest tropical cyclone to make landfall in Somalia and the strongest ever recorded in this part of the world
Tropical Cyclone “Gati” made landfall over Cape Hafun, Puntland, Somalia at around 15:00 UTC on November 22, 2020, with a maximum 3-minute average wind speed of 130 – 140 km/h (80 – 87 mph) — Very Severe Cyclonic Storm / equivalent to a Category 2 hurricane on the Saffir-Simpson scale. According to the JTWC, 1-minute maximum sustained winds at the time of landfall were 167 km/h (103 mph).

Pope Francis Gives Delegation From The National Basketball Association A Rare Private Audience To Discuss Social Justice And Black Lives Matter
Revelation 18 shows us a political ruler, a king, fornicating spiritually with the leaders of the world, and exerting near-universal influence and power over the nations, that king is the king of Vatican City, the Holy See. And today that king gave the NBA and radical American terror group Black Lives Matter a private audience so they could discuss social justice. Social it may have been, but justice? You won’t see any of that here.

President Trump Deploys B-52H Stratofortress Bombers To Middle East For Possible Strike On Iran As Last Gift For Israel Before Leaving Office
..Now we are learning that President Trump has ordered a fleet of B-52H Stratofortress Bombers to the Middle East for a possible strike on Iranian military interests in Iran, Lebanon and other places where they exist to do damage to the nation of Israel.

At Virtual G20, Communist China Dictator Xi Jinping Calls For Global QR Code Human Tracking System As Part Of COVID-1984 Digital Immunity Passport
The global elites behind the Great Reset have given us the entire year of 2020 to mentally prepare ourselves for the coming New World Order, and their puppet candidate at the center of it all, Joe Biden, is only too eager to get started in his brief stint as the 46th president of the United States. We have been warning you about the coming digital Immunity Passport, and now the country that gave us the Chinese Virus is called for exactly that. Expect a cameo appearance from Bill Gates in 3,2,1…

Netanyahu Flies To Saudi Arabia For Secret Abraham Accords Meeting With Pompeo And Crown Prince Bin Salman
Over the weekend, a stunning end times development took place. Prime minister of Israel, Benjamin Netanyahu, got an a plane and under cover of darkness flew to Saudi Arabia where he took part in a secret meeting with Crown prince Mohamed bin Salman and US Secretary of State Mike Pompeo. What was on the table? Oh, not much, just the Abraham Accords, the creation of a Palestinian state, and a giant step towards the Daniel 9:27 covenant with death and Hell. Go ahead, you can say it. Wow. That’s right.

“Just Let Me Go” – Shanghai Airport Plunged Into Chaos After Workers Sealed In For COVID Testing
“I don’t want to die here.”