In Q1 2021, the US economy registered double-digit annualized growth in nominal GDP, a rare occurrence. Yet, an even more rare event is that corporate operating profits did not increase in the quarter when GDP growth increased double-digits.

How can companies’ operating earnings be flat when nominal growth is booming? How does the GDP measure of operating square with S&P 500 firms reporting substantial gains in Q1, far exceeding analysts’ estimates?

The Bureau of Economic Analysis (BEA) reported that nominal GDP increased at an annual rate of 11% in Q1 2021. Since the Reagan boom of the early 1980s, the US only registered double-digit annualized quarterly growth eight times, not including Q1. Five of those occurred during the 1983-84 period of massive federal tax cuts and defense spending boom.

A decline in operating margins helps explain the weak profit performance against a backdrop of rapid nominal growth. Factors that squeezed Q1 margins include private-sector wage and salary cost increasing faster than GDP prices (4.6% versus 4.3%) and a 20% jump in costs for intermediate materials and supplies. 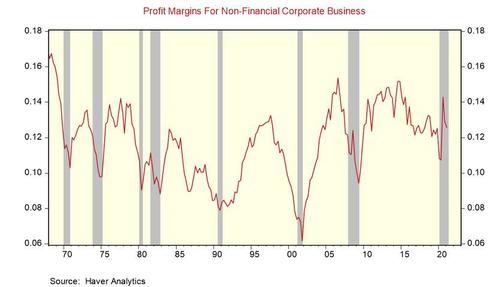 Declines in profits margins are more late-cycle events, so drop the Q1 margins, which comes on the heels of a drop in Q4 2020 as well, bears watching, especially with equity markets trading at record highs with elevated price-to-earnings ratios.

The financial accounting framework allows companies to include non-operating profits and losses. The most significant non-operating items include capital gain income and losses resulting from trading activities or a revaluation of an asset. GDP profits exclude capital gain income and losses and revaluations of assets (higher or lower). Also, financial accounting allows firms not to record employees’ stock options as an expense, but firms can use the appreciation of securities for specific purposes to boost reported earnings.

Past studies by the Bureau of Economic Analysis (BEA) have found that capital gain income and losses and the mark-to-market of securities holdings can explain much of the difference in the operating profit measures.

At the moment, there seems to be a circular flow going on between equity market gains and reported profits. Equity prices rise based on the expectations of higher reported profits, and it’s the increase in the share prices that enables companies to report strong financial results when profits from operational units are underperforming.

Yet, its core earnings, not capital gain income, that matter the most, something that equity investors, analysts, and strategists are ignoring for the moment.

At the outset of an economic upturn, profit margins expand, and the expansion in margins can run for several years. But operating margins are not expanding today.

Several factors are at work. Labor shortages are forcing wages up much more so than is typical at the early stage of recovery. Also, delayed deliveries because of supply-chain bottlenecks result in higher transportation and logistics costs, and strong demand is lifting material and supplies input costs.

Wage and cost pressures are not dissipating anytime soon. Surveys of manufacturing and services firms for May continue to show relatively high prices paid indexes. Also, with the customer inventories index in the manufacturing surveys at record low levels, it will take several months, if not quarters, before a better balance exists between supply and demand. And a rising percentage of small and big firms have already or are planning to raise wages to attract more labor.

One has to ask why so early in the economic upturn are there general costs and price pressures. The history of business cycles shows a cycle in prices, but many of these cost and price pressures have been missing in recent business cycles and never show up early in the upturn. It is wrong and short-sighted to argue that it is transitory or a blip, especially with the current policy backdrop. Should more inflation be a surprise when fiscal policy runs record deficits to support growth, and monetary policy is the most accommodative on record?

Firms need to raise prices to cover rising costs from all sides and stabilize, if not reverse, shrinking margins. And they are. As this process continues to play out, the inflation cycle runs longer, bringing the Fed into play with the need to raise interest rates at some point. Higher interest rates will not immediately impact the operating results of non-financial firms, but they will pressure the valuations of equity prices.

Shrinking profit margins are never a harbinger of good news for equity investors, nor is the prospect of monetary restraint to dampen rising price pressures.