The Federal Reserve has hiked 375bps in just six meetings this year. Mortgage rates have followed suit, skyrocketing from a low of 2.7% in February to 7.35% earlier this month. The aggressive tightening of monetary conditions has sparked an affordability crisis — sidelining millions of potential homebuyers while existing home sales crash to the worst level since 2008.

Higher borrowing costs triggered a sharp drop in mortgage applications and home sales in the back half of the year. Deal flow is drying up for many real estate agents, resulting in financial duress that may worsen into early 2023.

In October, a shocking 37% of real estate agents struggled to pay office rent — a 10% increase from the prior month, according to Yahoo, citing a new report via Redfin. The figure could worsen as the housing market rapidly cools via the Fed-induced demand side crunch.

Such rapid heating of the housing market during the pandemic era brought in an influx of new agents. The National Association of Realtors said membership hit an all-time high of 1.56 million in 2021 (pandemic boom year) — up from 1.49 million the year before.

While we don’t expect a similar 2008-09 housing crash, the Federal Reserve Bank of Dallas warned last week that home prices could plunge 20% next year due to affordability woes. 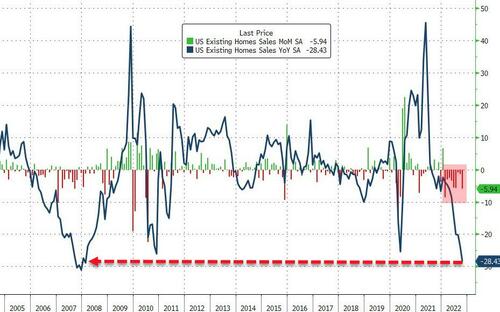 Absent the nadir of the COVID lockdowns, this is the lowest existing home sales SAAR since Dec 2011… 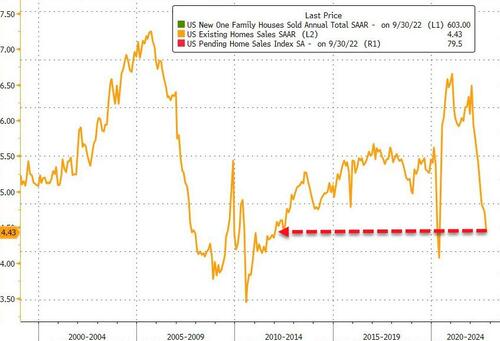 Deal flow slump for agents comes as lagged Case-Shiller Index showed US housing prices dropped 1.3% from their June 2022 peak in August. This is the most significant monthly decline since the Lehman collapse. 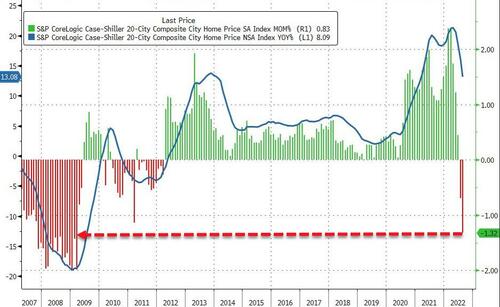 The national home price index growth has slowed for five straight months (below 13% YoY for the first time since Feb 2021). The absolute drop in the growth rate of 2.62 percentage points is the largest ever… 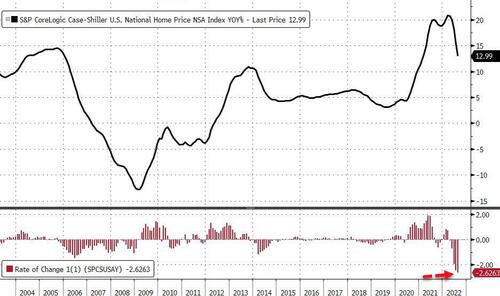 Researchers at Goldman Sachs aren’t as bearish as the Dallas Fed, expect a 5-10% slump from peak to trough in home prices — with their official forecast model predicting a 7.6% decline. 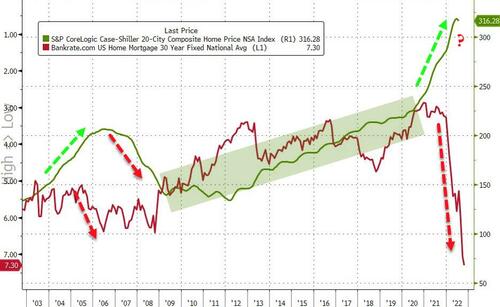 The unprecedented explosion in mortgage rates and freezing of the housing market is terrible news for all those newly minted agents during the pandemic. Mounting financial hardships and slumping deal flow, with the inability to service office rent, could result in many leaving the industry, perhaps, returning to their old bartending jobs.