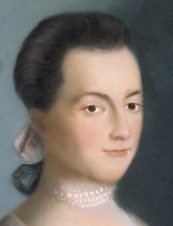 Abigail Smith Adams (1744-1818) was the second of three daughters born to a well-respected family, her father being a Congregationalist minister in Massachusetts. [1] Due to her poor health in her early life Abigail had no formal education. [2] In fact, at a time when female education was “neglected” and it had become “fashionable…to ridicule female learning,” [3] Abigail rose above this to become “qualified for eminent usefulness in her distinguished position as the companion of one great statesman, and the guide of another.” [4]

Her strong religious convictions and intellect led her to be considered her husband’s “trusted advisor” [5] as she regularly wrote him information concerning what was happening in America throughout the Revolution. [6]  Her Christian faith is evidenced not only by a statue of her and John Quincy Adams that has been placed outside the church in Quincy,
Massachusetts where she was buried, [7]  but also by her many religious references throughout her letters. [8]

For example, as Abigail Adams reported to her husband, John Adams after the Battle of Bunker Hill:

The race is not to the swift, nor the battle to the strong; but the God of Israel is he, that giveth strength and power unto His people. Trust in Him at all times, ye people, pour our your hearts before Him; God is a refuge for us.” Charlestown is laid in ashes. The battle began upon our entrechments upon Bunker’s Hill, Saturday morning about three o’clock, and has not ceased yet, and it is now three o’clock Sabbath afternoon. It is expected they will come over the Neck tonight, and a dreadful battle muse ensue. Almighty God, cover the heads of our countrymen, and be a shield to our dear friends! [9]

In 1778, when John Quincy was 11 years old and accompanying his father on a diplomatic mission to France, Abigail gave him the following advice:

Adhere to those religious sentiments and principles which were early instilled into your mind and remember that you are accountable to your Maker for all your words and actions….

[D]ear as you are to me, I would much rather you should have found your grave in the ocean you have crossed, or that any untimely death crop you in your infant years, than see you an immoral, profligate, or graceless child….

Young as you are, the cruel war, into which we have been compelled by the haughty tyrant of Britain and the bloody emissaries of his vengeance, may stamp upon your mind this certain truth, that the welfare and prosperity of all countries, communities, and, I may add, individuals, depend upon their morals. [10]

Another reflection of Abigail’s strong Christian faith is seen in a handwritten letter of Abigail’s that WallBuilders possesses.

In this letter to a friend on July 31, 1811, Abigail spoke a little about her older sister (Mary Cranch) and the illness that eventually resulted in her death later that year, [11] acknowledging that “to our heavenly Father I commit her.” The handwritten letter, along with its transcription is included below.

In 1818, Abigail contracted typhoid fever and passed away on October 28, 1818, but she left a legacy as a woman who “exercised great and far-reaching influence in her day and generation.” [12] For additional information about Abigail Adams, see the book Wives of the Signers, published by WallBuilders. 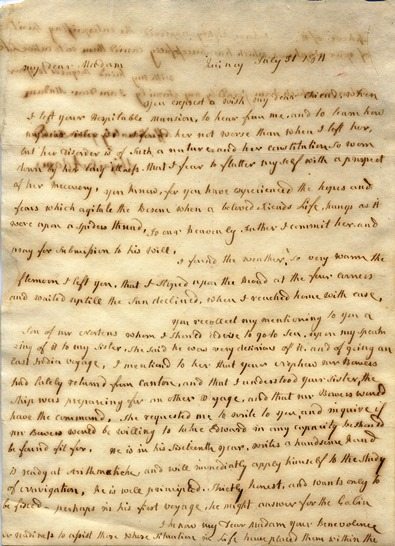 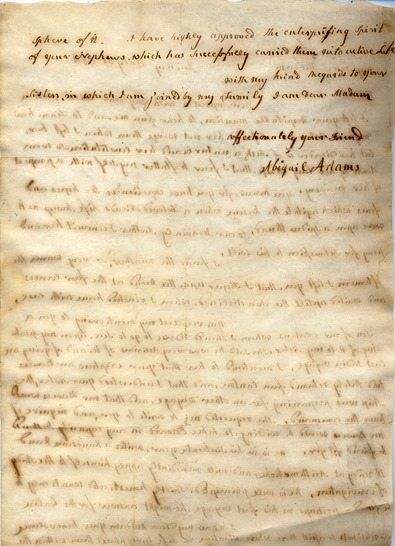 This is the text of Abigail Adam’s letter:

You expressed a wish my dear friend when I left your hospitable mansion to hear from me and to learn how my dear sister is. I found her not worse than when I left her, but her disorder is of such a nature and her constitution so worn down by her long illness that I fear to flatter myself with the prospect of her recovery. You know, for you have experienced the hopes and fears which agitate the bosom when a beloved friends life hangs as if were upon a spiders thread.

To our heavenly Father I commit her and pray for submission to His will.

I found the weather so very warm the [a]fternoon I left you, that I stayed upon the road at the four corners and waited until the sun declined, when I reached home with ease.

You recollect my mentioning to you a son of Mr. Nortens whom I should advise to go to sea. Upon my speaking to my sister she said he was very desirous of it and of going on an East India voyage. I mentioned to her that your son had lately returned from Canton and that I understood your sister, the ship was preparing for another voyage and that Mr. Bowers would have command. She requested me to write to you and inquire if Mr. Bowers would be willing to take Edward in any capacity he should be found fit for. He is in his sixteenth year, writes a handsome hand, is ready at arithmetic [sic] and will immediately apply himself to the study of navigation. He is well principled, strictly honest, and wants only to be fixed – perhaps in his first voyage, he might answer for the cabin.

I know my dear madam your benevolence in readiness to assist those whose situation in life have placed them within the sphere of it. I have highly enjoyed the enterprising spirit of your nephews which has successfully carried them into active life.

With my kind regards to your sister, in which I am joined by my family, I am dear madam