Authored by Hannah Wolfman-Jones via BitcoinMagazine.com,

The academic community must make the choice of honest intellectual consideration of Bitcoin or continued deliberate ignorance.

Bitcoiners are not welcome in academia.

Academics, including economic professors, overwhelmingly do not understand Bitcoin and represent it unfavorably (if they mention it at all). University professors are prone to favor Keynesian fiat economic systems due in part to a revolving door between academia and the IMF, World Bank, World Economic Forum (WEF), the Federal Reserve and more. Universities and professors are also financially incentivized through grants and financial support to promulgate economic theories in favor of more government control. Economics departments enforce group-think by selectively hiring professors who are less likely to dispute their fiat economic theories. I discussed all of this in my previous article.

This is not to say that individual academics supporting Keynesian economics are corrupt; most arrived at their positions through honest and legitimate work. However, academia fails to acknowledge that professors are very often the central planners and thus benefit both financially and in prestige/power from more central planning. Therefore, a reasonable person would expect there to be a pervasive bias in favor of centrally controlled fiat economic systems among the professoriate. Not acknowledging this systemic bias is hugely dishonest.

In fact, there is systemic exclusion of Bitcoiners from academia. It has been done through a combination of university policies, socially enforced viewpoint-conformity and strong bias towards the fiat system and official narrative.

A long list of views — many held by the majority of the population outside academia’s small ideological bubble — are now forbidden by the increasingly ideologically possessed students, professors and staff within academia. It is now common for students, professors and staff to shut down, defame, threaten and sometimes even be violent towards people expressing opinions deemed too offensive. Often under the banner of “saving lives” or “social justice” or (most ironically) “protecting democracy,” speakers and opinions get barred from campuses. It is rare for a university president to stand up to a woke mob. Bitcoiners in particular are prone to run afoul of the ever-changing woke pieties so rigorously enforced.

The viewpoints shown in the table below are frequently held and often quite important to Bitcoiners, including many of the foremost Bitcoin educators/experts. However, they are repressed in academia to varying degrees of severity. This leads to a systemic exclusion from academia of those who understand and value Bitcoin. The result, unsurprisingly, is widespread ignorance on all matters Bitcoin among the professoriate tasked with teaching students about the economy, human rights, geopolitics and the world. No Bitcoiner holds all the views shown in the table below, but most hold several of them. These views are held by Bitcoiners at much higher rates than the general public or academia.

Not only do Bitcoiners often hold “cancelable” views that would bar them from university positions, but they tend to be unusually willing to express said disfavored views. 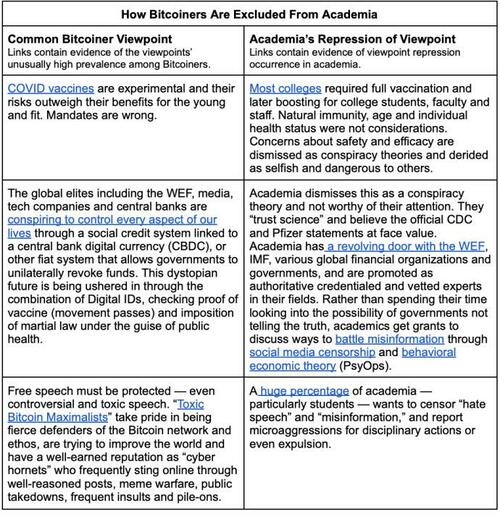 Links for: “COVID vaccines” “Most colleges” “conspiring to control every aspect of our lives” “a revolving door with the WEF” “Toxic Bitcoin Maximalists” “huge percentage” “battle misinformation through social media censorship and behavioral economic theory” 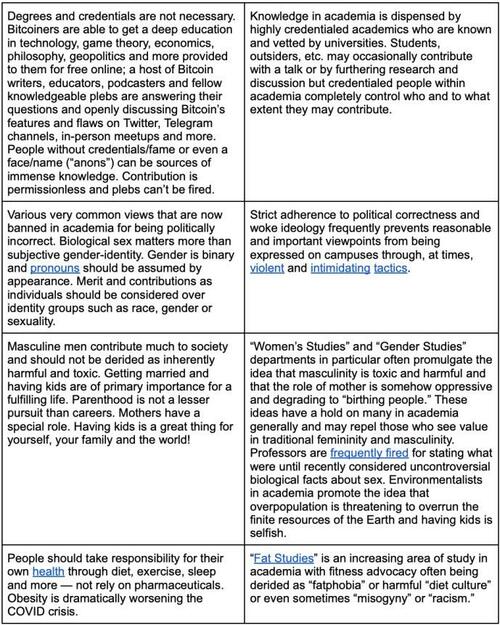 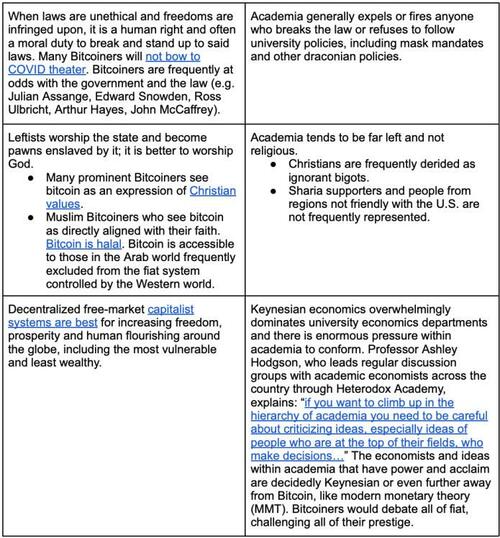 Links for: “not bow to COVID theater.” “Christian values.” “Bitcoin is halal” “capitalist systems are best” “if you want to climb up in the hierarchy of academia you need to be careful about criticizing ideas, especially ideas of people who are at the top of their fields, who make decisions…”

While the picture I painted above may be bleak, academic institutions have had a big role in expanding the knowledge and intellect of humanity for centuries. Their continued contributions to knowledge, arts and education cannot be denied. However, academia needs to acknowledge that their rampant ideological conformity and exclusion of reasonable views is a huge disservice to their students and in conflict with the honest pursuit of knowledge.

Excluding Bitcoiners from the academy and dishonestly degrading Bitcoin is a mistake. The result is a failure to fully prepare the student body for the economy and world of tomorrow.

However, there are plenty of reasons to have hope for academia yet. I recently had the immense honor and pleasure of presenting to the HxEconomics Community, a group facilitated by Heterodox Academy, a nonpartisan organization of university professors, administrators, students and staff “committed to enhancing the quality of research and education by promoting open inquiry, viewpoint diversity and constructive disagreement in institutions of higher learning.”

As a testament to living their values, the economics discussion group graciously invited me, an unknown nonacademic without any special credentials, to give a presentation titled, “Overlooked Orthodoxy, Academia’s Bias Against Bitcoin.” In the fruitful informal discussion that followed, the small group of professors and students agreed my thesis was likely true. So now I ask Heterodox Academy and the academics everywhere who give a damn about intellectual integrity: Do you think there is an anti-Bitcoin orthodoxy in academia? Do my two articles and presentation have any ring of truth?

Unfortunately, it appears the Heterodox Academy membership — sizable as it may be at 5,000+ — are the decided minority in academia in caring about open discussions these days. They have their work cut out for them in breaking up the pervasive ideological conformity sweeping academia and subverting the rigor of study in subjects from math to public policy to medicine.

So academia, you have a choice: start honestly teaching and studying Bitcoin or become increasingly irrelevant as an obvious intellectual fraud. Many of your students have been learning from Bitcoiners for free online for years. They spot your ignorance or dishonesty immediately when you inflate Bitcoin’s energy use, downplay its utility, omit the inequality and fragility in fiat from your curricula, ignore the violence of the petrodollar and completely demonize Bitcoin as an economic system. Please open your minds to Bitcoin and the currently locked doors of the ivory tower to Bitcoiners.