“We no longer have the … opportunity of blaming each other, we all face a great test,” Ghani told the Afghan parliament in a Monday joint session where he called for unity amid the threat of an Islamist take over, local outlet TOLOnews reported.

“[T]he current situation is due to a sudden decision on the withdrawal of the international troops,” he said, adding that “the protection of the people is our duty.”

Ghani’s words came as the regime in Kabul is struggling to hold onto key territories amid a Taliban advance.

With the U.S. having completed “more than 95% of the entire withdrawal process,” according to a Tuesday update from U.S. Central Command, over 80 percent of Afghanistan’s 421 districts are either fully under Taliban control or are contested, according to data from the Foundation for Defense of Democracies. 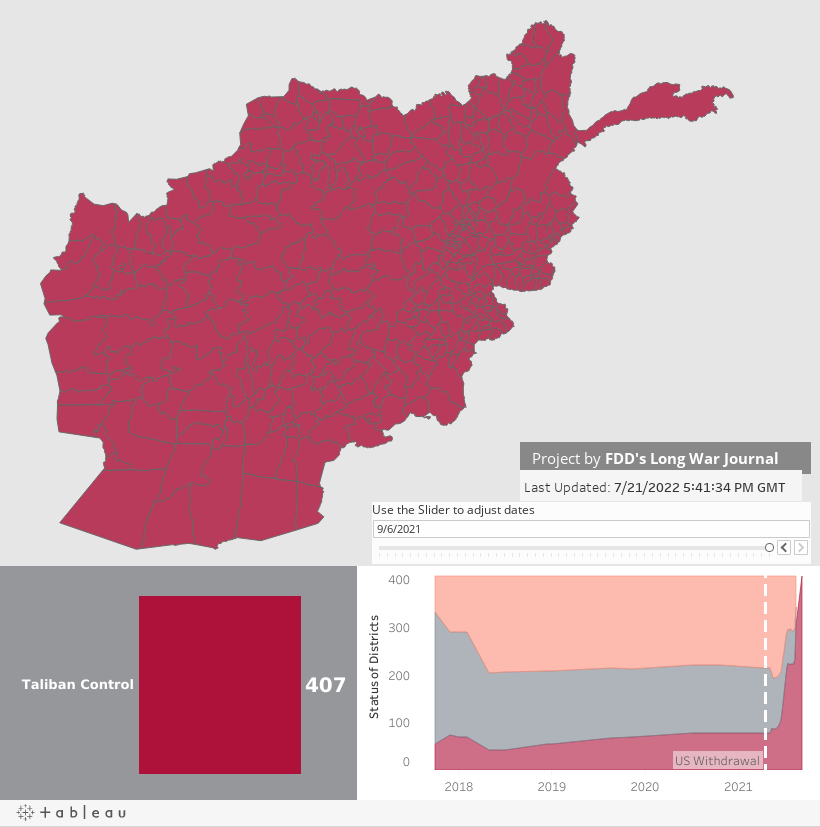 As pro-government and pro-Taliban forces lock horns in their violent struggle for the future of the nation, Afghan civilians have been paying the price with the number of civilian casualties climbing to record levels.

While the Taliban and the government in Kabul and their allies fight each other, the Islamic State group affiliate IS-Khorasan Province has been conducting terrorist attacks and assassinations in the country in what appears to be an attempt to turn a now-chaotic Afghanistan into a breeding ground for the group after its defeat in Iraq and Syria during the administration of former President Donald Trump.

In the chaos, 1,659 people have been killed and 3,524 wounded, many of them women and children, according to the latest numbers from the United Nations Assistance Mission in Afghanistan.

According to U.N. data, the number of civilian casualties accelerated after Biden in April announced his intent to withdraw U.S. troops by the 20th anniversary of the Sept. 11, 2001, terrorist attacks — four months after Trump’s May 1 deadline.

Biden would later revise the withdrawal deadline and set it to the end of this month.

“We have paid a high price for peace and showed great gentleness, but instead war was imposed on us,” Ghani said in his Monday speech to parliament, indirectly referring to the Afghan government’s release of 5,000 Taliban prisoners under pressure from the Trump administration to fulfill a provision in the February agreement, TOLOnews reported.

The Trump administration pressured the Kabul regime to release the prisoners out of an expectation that the Taliban would keep their end of the deal. However, the Taliban did not stay committed to the agreement.

Yet Biden, when he had a chance to revise the withdrawal after he took over as president, in light of the Taliban’s attitude to the agreement, decided to continue with the U.S. withdrawal, only delaying it.

According to TOLOnews, Ghani decried the withdrawal as “imported” and “hasty,” claiming it resulted in “legitimizing an insurgent group instead of achieving peace.”

“If Afghan cities fall … the U.S. decision to withdraw from Afghanistan will be remembered as one of the most notable strategic blunders in American foreign policy,” Afghanistan expert Nishank Motwani, who is based in Australia, told the Agence France-Presse news agency, according to France24.

Ghani warned that the “abruptly” undertaken withdrawal will have “consequences,” France 24 reported.

Multiple countries, most notably China, have begun holding talks with the Taliban, giving off the impression that they see the Taliban as a potential successor to the Kabul government. The tacit legitimacy the group has been receiving, however, hasn’t pacified it.

Furthermore, Noori said target lists were circulating around social media, threatening “people, civil society activists, government officials, people working for the education sector,” including a friend of his who runs a mobile library for children in Kabul.

As Biden decided to go ahead with the withdrawal, Noori said, Afghans are left with feelings of betrayal.

“I do remember the arrival of the U.S. forces and NATO allies. It did give hope to a lot of people, it did give smile[s] to a lot of people, it gave a lot of freedom to Afghan women because they didn’t have freedom under the Taliban,” Noori said. “There was a lot of hope that now that the Americans are here, they will save us from terrorism. But after 20 years, we do feel betrayed by the U.S. They are leaving us behind.”

Faced with a violent insurgent group that has resorted to terrorist tactics on multiple occasions, the Afghan people have been fleeing in large numbers from the violence and the extremist sharia-based religious form of government the Taliban seeks to implement.

According to The New York Times, 30,000 Afghans are leaving every week, and the number of internally displaced individuals is even higher.

During a July news conference, Biden denied that any comparison could be made between the Afghanistan withdrawal and the chaotic U.S. withdrawal from Vietnam in 1973.

“None whatsoever. Zero,” Biden he said, according to the Washington Examiner. “The Taliban is not the North Vietnamese Army. They’re not, they’re not remotely comparable in terms of capability.”

“There’s going to be no circumstance where you’re going to see people being lifted off the roof of an embassy of the United States from Afghanistan. It is not at all comparable,” he said.

As the Taliban increases its grip on the nation, time will tell if Biden’s assessment holds true.