AFL-CIO president Richard Trumka has unexpectedly died at the age of 72, Politico reports. 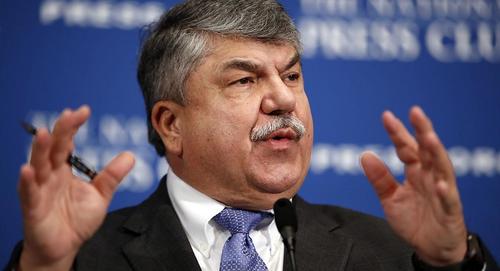 Trumka, 72, had served as president of the federation, which represents more than 12.5 million workers, for more than a decade and has been a close ally of the Biden White House.

Trumka died of what was believed to be a heart attack, a source familiar with the matter said. It was unclear when exactly it occurred though believed to have taken place either Wednesday evening or Thursday morning.

Reacting to the news, Senate Majority Leader Chuck Schumer (D-NY) said in a teary-eyed floor speech: “We have lost a giant,” adding “He had in his veins, and every atom of his body, the hearts, the thoughts, the needs of the working people of America.”

“The working people of America have lost a fierce warrior,” Schumer said.

Schumer announces to the Senate the death of the AFL-CIO President:”I rise to today with some sad, some horrible news about the passing of a great friend Rich Trumka, who left us this morning.The working people of America have lost a fierce warrior at a time we needed him most.” pic.twitter.com/XFDsn9M7rf