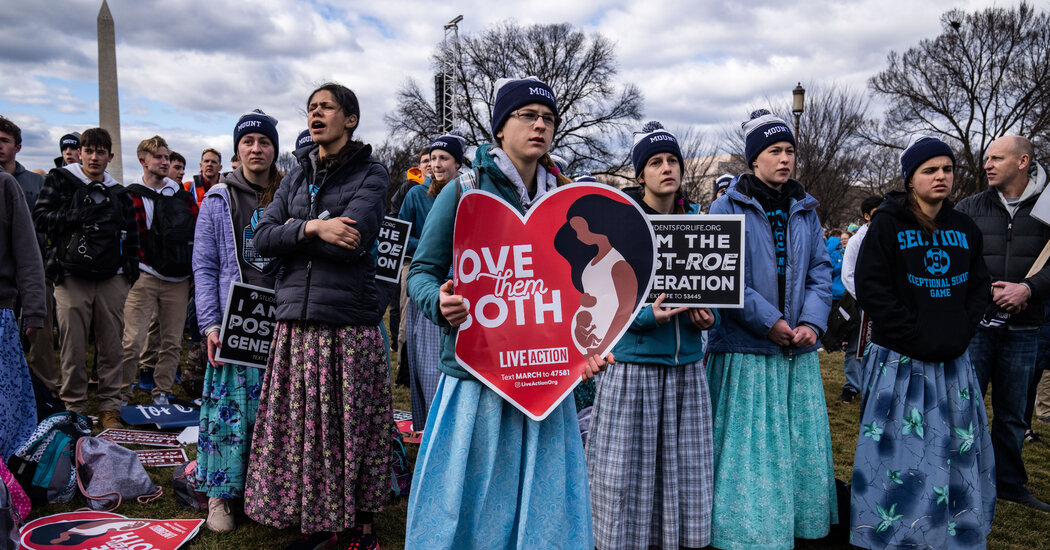 WASHINGTON — Thousands of anti-abortion activists convened on the National Mall on Friday for the March for Life, the rally held every January since 1974 to protest Roe v. Wade.

This year, for the first time, they were there to celebrate its demise. And with Roe defeated, it was also an opportunity for new ideas, organizations and voices to make their debuts on the national stage.

“This is a moment to define the next chapter of the pro-life movement,” Andrew Guernsey, a young policy adviser for Senator Cindy Hyde-Smith, a Republican from Mississippi, told attendees at a panel called “Capitol Hill 101” the day before the march.

Activists across the country have said they were looking forward to the first major gathering since the Supreme Court overturned the constitutional right to abortion last summer, the culmination of five decades of activism. Historically, the march has served as an occasion for strategizing, socializing, and making new connections with other activists.

Speakers on Friday included Mississippi’s attorney general, Lynn Fitch, who won Dobbs v. Jackson, the Supreme Court case that overturned Roe. Representative Steve Scalise of Louisiana, the House majority leader, was also scheduled to address the crowd, and Jonathan Roumie, who plays Jesus in the popular Christian drama “The Chosen,” was expected to make a first appearance at the event.

What some activists anticipated last summer would be their party of the century arrives at a complicated moment for the movement. After notable losses in the midterms, Republican lawmakers are struggling with what it means to be “pro-life” in a post-Roe political landscape. Other culture-war issues, including debates about gender, are taking up oxygen on the right. And former President Donald J. Trump, who became the first sitting president to address the march in person in 2020, now seems to be distancing himself from the movement, recently blaming “the abortion issue” for Republicans’ losses in the midterms and lashing out at evangelical leaders for being insufficiently loyal to him after the wins he delivered on abortion.

Many activists say they see the reset as a positive.

“Dobbs has provided an incredible opportunity for innovation in the pro-life movement, particularly at the state level,” said Brent Leatherwood, elected last fall as president of the Ethics and Religious Liberty Commission, the public policy arm of the Southern Baptist Convention.

Mr. Leatherwood was among the attendees at a private convening this week of Stand for Life, an organization that launched a few weeks ago as an alliance of more than 100 existing groups with the goal of building unity in the movement. One of their first projects is a curriculum on abortion and other “life issues” to be distributed by churches. The group was founded by Lauren McAfee, a granddaughter of the founders of Hobby Lobby.

While the march brought out many veterans of the movement, it also attracted some newcomers.

Holli Shelton said she had an abortion when she was 18 in her home state of Arkansas. On Friday morning, she joined the March for Life for the first time, carrying a sign that said “I regret my abortion.”

Nearly three decades after her abortion, Ms. Shelton, a therapist, traveled to Washington with her college-aged daughter.

“This is a new thing for me,” Ms. Shelton said, gesturing to her sign. “I think today is a start for my healing.”

At other events across the city, anti-abortion activists socialized and made new connections.

At a panel discussion hosted by the University of Notre Dame’s de Nicola Center for Ethics and Culture the night before the march, panelists exulted in the Dobbs victory — one compared it to the Cubs winning the World Series — but acknowledged there was work to be done on “building a civilization of love.”

Herb Geraghty, 26, used the march as the time to help re-launch the Pro-Life Alliance of Gays and Lesbians as the Rainbow Pro-Life Alliance, partly in acknowledgment of shifting language around gender and sexuality.

“If we’re not welcomed by the mainstream movement, then we’ll make our own space,” said Mr. Geraghty, who is the executive director of Rehumanize International. Given the rising Gen-Z presence in the anti-abortion movement, he added, “I’m an optimist.”

Rehumanize International — which opposes abortion and the death penalty — is hosting a karaoke fund-raiser as an after-party to the march at a bar on Friday night. (There will be vegan food options, and the invitation notes that the venue has gender-neutral bathrooms.)

In the run up to Friday’s march, anti-abortion organizations set up tables in the hallways of a hotel downtown, where staff members and volunteers handed out pamphlets, wristbands, and candy.

Abigail Bongiorno, a lawyer with the Thomas More Society, a conservative law firm that often represents anti-abortion clients, beamed at a group of high-school students that passed her booth.

“The number of people I’ve already seen, the number of young women here, it’s been absolutely wonderful,” she said.

On Sunday, Ms. Bongiorno’s home state of Wisconsin will be the main host of the annual Women’s March, an event created in 2017 to protest Mr. Trump’s inauguration. This year’s Women’s March will focus on protecting abortion access through state courts and legislatures. The organization’s marquee event will be held in Madison, with affiliated events planned across the country.

Rachel Carmona, executive director of the Women’s March, said the demise of Roe was “a loss wrapped in a win” for Republicans, because they have been forced to contend with newly energized voters who support abortion access.