Smith was previously the chief of the Justice Department’s Public Integrity Section, where he oversaw public corruption and elections-related investigations.

Presumably this probe will take just under two years, leaking regular updates of “now we’ve got him” soundbites, until the findings are released just before the election showing that there’s no there, there.

Just a few short days after Trump said during his 2024 campaign launch:

“Nothing is greater than the weaponization from the system, the FBI or the DOJ. We must conduct a top to bottom overhaul to clean out the festering rods and corruption of Washington, D.C.”

“Attorney General Merrick Garland will appoint a special counsel to determine whether former President Donald Trump should face charges stemming from Justice Department probes, according to a person familiar with the matter.”

It seems Trump’s warning from earlier in the week is about to come true:

“The journey ahead of us will not be easy,” he continued.

“Anyone who truly seeks to take on this rigged and corrupt system will be faced with a storm of fire that only a few could understand.” 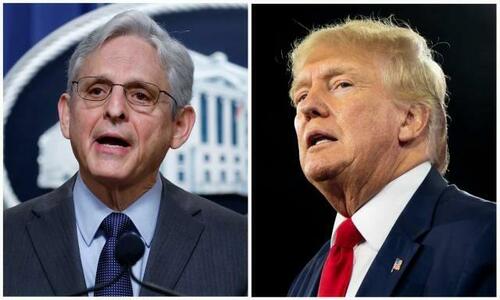 As Techno Fog details via The Reactionary Substack, WSJ reports that the announcement is to come sometime Friday afternoon. The identity of the special counsel is yet to be announced.

We expect the scope of the special counsel’s investigation to cover the Biden DOJ’s current prosecutorial efforts relating to the raid at Mar-a-Lago, which includes an investigation into mishandling of classified documents/national security documents, obstruction of justice, and the destruction of government records.

For the Biden DOJ, this step is no surprise. They would have planned for it to take place once Trump announced his candidacy. And sure enough, here we are. While the special counsel is quasi-independent, allegedly, it will still be subject to the control of Attorney General Garland.

Of course, this news came after federal officials decided to wait until after the midterms to leak information beneficial to Trump regarding the Mar-a-Lago raid.

The Washington Post reports on the review of the documents – purported by the Biden DOJ to be classified – by federal authorities:

That review has not found any apparent business advantage to the types of classified information in Trump’s possession, these people said. FBI interviews with witnesses so far, they said, also do not point to any nefarious effort by Trump to leverage, sell or use the government secrets. Instead, the former president seemed motivated by a more basic desire not to give up what he believed was his property, these people said.

Motive matters in this context, and it is especially important that Trump had no type of nefarious intent with respect to the records. But will it matter enough to prevent the Biden DOJ – now the upcoming special counsel – from charging relating to the potential crimes it is investigating: “mishandling of national security secrets, obstruction, and destruction of government records”?