Amazon has walked back raises sent to corporate employees after a ‘glitch’ apparently resulted in more generous compensation. 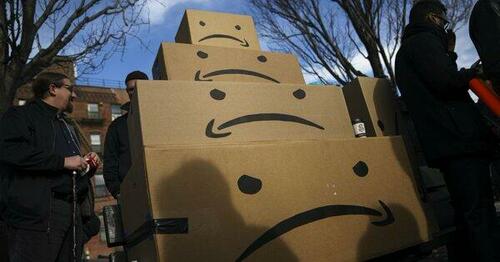 After telling employees about one-time bonuses which would be part of their compensation package, they then send a second email letting workers know the figures had been miscalculated due to a software error, and would be lower than what they had been told, according to Insider.

Around 40% of promoted employees this quarter were affected by the error, which was due to the fact that bonuses were initially calculated using older, higher stock prices.

“We identified and immediately corrected an issue with some newly promoted employees’ compensation communications,” an Amazon spokesperson told Fortune. “We are working with employees to ensure they understand their updated compensation.”

The glitch comes as Amazon employees have been increasingly dissatisfied with compensation, as many believe they are paid less than their peers in the tech sector. In response, Amazon almost doubled its base pay cap and promised to shower people with raises earlier this year – only to leave employees even more disappointed.

One Amazon employee wrote in an internal Slack channel Thursday morning in response to learning about the glitch that as “stock continues to tank every day,” Amazon was “taking away something that somewhat made us whole.”

Amazon’s share price has fallen 28.2% in the past six months. Because of the error, “it is likely that the promotional cash value your employee will now receive is lower than you originally discussed with them,” the email to managers said. “We recognize that this is an uncomfortable conversation to have.”  -Insider

Company rep Brad Glasser told Insider that Amazon “identified and immediately corrected an issue with some newly promoted employees’ compensation communications,” adding “We are working with employees to ensure they understand their updated compensation.”

Can’t Bezos peel off a what would surely be an insignificant amount to make good on his company’s mistake?