A few days ago, we reported the latest “stunning numbers” on American overdose deaths: more than 90K Americans died in 2020 of drug-related overdoses, with some 80% of those involving fentanyl, the synthetic opioid that has displaced heroin as the most commonly abused illicit opioid in the US. 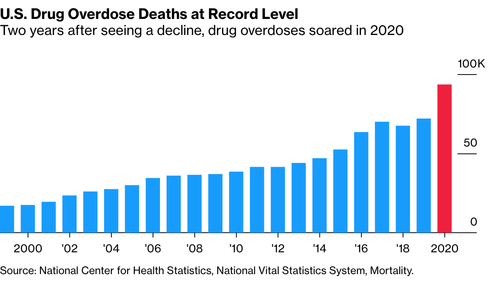 These deaths, combined with the nearly 400K Americans who were killed by COVID last year, have officially led to the biggest drop in US life expectancy since WWII.

Provisional data released Wednesday by the Centers for Disease Control and Prevention showed that American life expectancy dropped to 77.3 years in 2020, roughly the same level as in 2003. 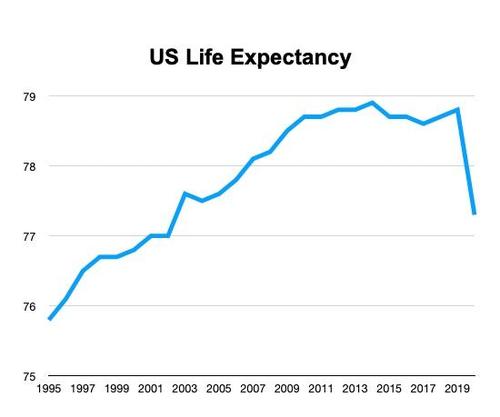 We reported on the preliminary data a few months ago, but now that it’s been confirmed: Life expectancy in the US fell by 1.5 years in 2020, the biggest decline since at least World War II, as COVID killed indiscriminately, while the numbers of overdoses, homicides and other “deaths of despair” climbed.

“I myself had never seen a change this big except in the history books,” said Elizabeth Arias, a demographer at the CDC’s National Center for Health Statistics and lead author of the report.

And from what we have seen so far, life expectancy won’t rebound to pre-pandemic levels this year. It could decline again if the Delta variant causes new infections to flare up. What’s more, many people skipped or delayed treatment last year for diabetes, high blood pressure and other conditions that could lead to more premature deaths.

“That has led to intermediate and longer-term effects we will have to deal with for years to come,” Donald Lloyd-Jones, chair of the department of preventive medicine at Northwestern University Feinberg School of Medicine and president of the American Heart Association, told WSJ.

COVID was the third-leading cause of death in the US last year, with heart disease and cancer remaining in the top spots. More deaths from homicide, diabetes and chronic liver disease also contributed to the drop in life expectancy. 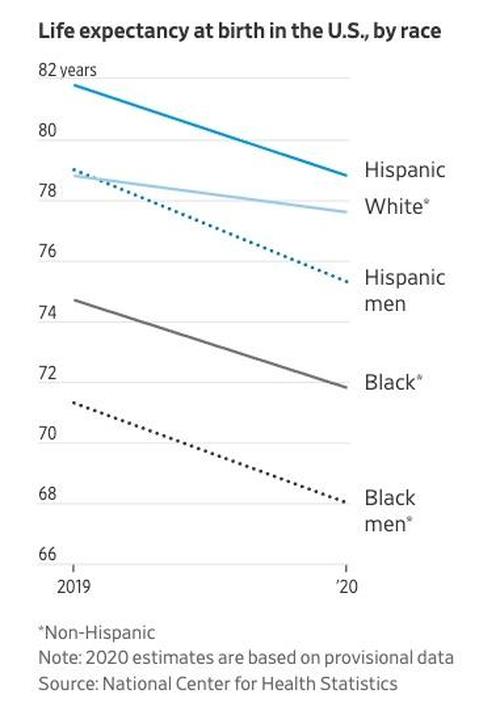 Hispanic and Black people saw the biggest declines, something the CDC attributed to them being disproportionately impacted by the pandemic. The biggest drop for any racial demographic was 3.7 years for Hispanic men, bringing their life expectancy to 75.3 years of age.

Life expectancy in the US has been declining for years, thanks largely to the surge in drug overdoses and other drug- and alcohol-related deaths, along with rising rates of deadly heart disease in middle-aged Americans. As one doctor told WSJ: “Getting back to where we were before the pandemic is still a very bad place.”