In June we reported that consumer credit – particular revolving credit – was through the roof, as tapped-out consumers relied on credit cards to make ends meet. This has only gotten worse.. 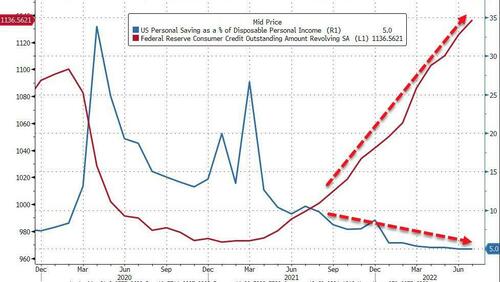 While both student and car loans hit all time new highs at the end of the 1st quarter. 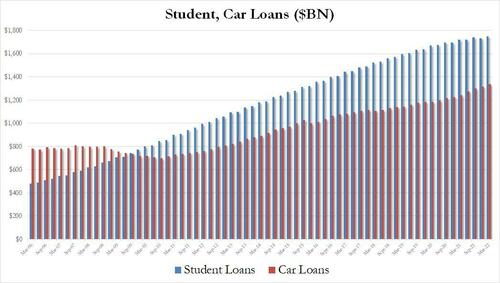 And so it comes as no surprise from Bloomberg that more US consumers are saddled with credit card debt for longer periods of time. According to a survey by CreditCards.com released on Monday, 60% of credit card debtors have been holding this type of debt for at least a year, up 50% from a year ago, while those holding debt for over two years is up 40%, from 32%, according to the online credit card marketplace. 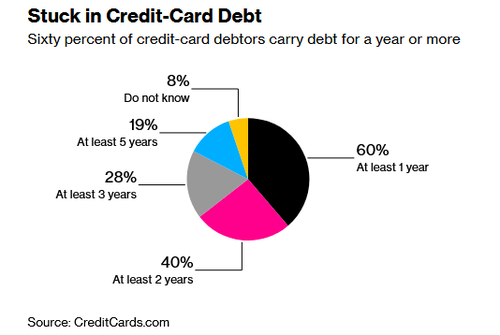 And while total credit-card balances remain slightly lower than pre-pandemic levels, inflation and rising interest rates are taking a toll on the already-stretched finances of US households.

About a quarter of respondents said day-to-day expenses are the primary reason why they carry a balance. Almost half cite an emergency or unexpected expense, including medical bills and home or car repair.

The Federal Reserve is likely to raise interest rates for the fifth time this year next week. Credit-card rates are typically directly tied to the Fed Funds rate, and their increase along with a softening economy may lead to higher delinquencies.

Total consumer debt rose $23.8 billion in July to a record $4.64 trillion, according to data from the Federal Reserve. -Bloomberg

The Fed’s figures include credit card and auto debt, as well as student loans, but does not factor in mortgage debt.