Are Soaring Food Inflation And Rolling Blackouts The Start Of Next Emerging Market Meltdown?

A combination of shocks is rippling through emerging market economies and has sparked soaring food and energy inflation, power blackouts, and social unrest. Countries with the weakest balance sheets and high debt loads appear to be sliding first into turmoil. This could be the beginning innings of an emerging market crisis last seen in the 1990s when socio-economic distress toppled governments, according to Bloomberg.

Already, skyrocketing food and energy prices have caused turmoil in Sri Lanka, Peru, Egypt, and Tunisia. The chaos could broaden as some emerging market countries, heavily saturated with debt, could be shocked by higher debt-servicing costs as the Federal Reserve embarks on an aggressive tightening campaign. This couldn’t have come at the worst time for these developing nations, as many had large capital outflows and borrowed vast amounts of money during COVID. Now they’re being hit by food and energy shock due to the Ukraine conflict.

An example of this toxic cocktail that could easily topple a country is Sri Lanka has already been pushed to the brink of default. The South Asian island nation’s foreign exchange reserves have collapsed, and food and fuel shortages, plus high inflation, have sparked unrest.

Bloomberg Economics shows a handful of other emerging economies at risk of crisis because of high debt and soaring yields. Notably, Ethiopia, El Salvador, Tunisia, Pakistan, and Ghana rank are the most at-risk because surging bond yields create higher default risk. 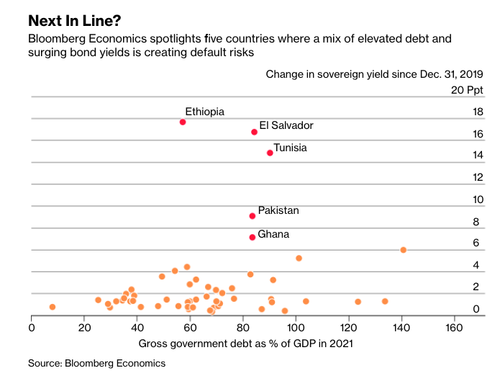 The Washington-based lender, International Monetary Fund, raised concerns in a recent report titled “Emerging-Market Banks’ Government Debt Holdings Pose Financial Stability Risks,” which warned government defaults like what happened to Russia in 1998 and Argentina in 2001-02 could be imminent across emerging market economies.

The report warned of a possible return of a “doom loop”:

A sharp tightening of global financial conditions—resulting in higher interest rates and weaker currencies on the back of monetary policy normalization in advanced economies and intensifying geopolitical tensions caused by the war in Ukraine—could undermine investor confidence in the ability of emerging-market governments to repay debts. A domestic shock, such as an unexpected economic slowdown, could have the same effect.

Bloomberg provides a set of gauges that shows emerging market risks are rising. 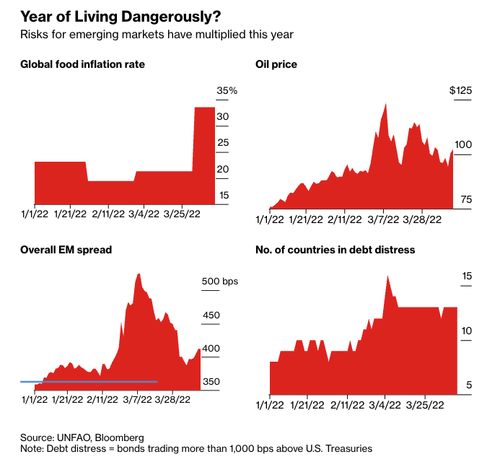 Bloomberg Economics created a list of the countries most exposed to the fallout from the Ukraine conflict. Turkey, Egypt, Vietnam, the Philippines, and Poland are ranked some of the highest at-risk. 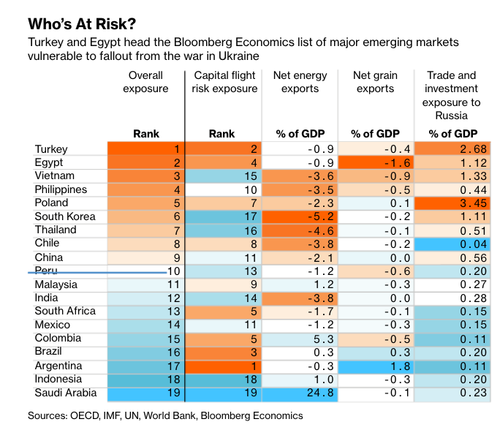 Ziad Daoud, Bloomberg Economics’ chief EM economist, said if an emerging market crisis were to develop, it might spread well beyond its origin.

“In a cascade of emerging-market credit events, the negative impact of the whole could be larger than the sum of the parts,” Daoud said.

The former Goldman Sachs economist who coined the term BRICs, Jim O’Neill, said the current economic climate is the most uncertain since the early 1980s.

“If we get the inflation risk persisting and central banks have to tighten policy, for certain emerging markets it will be a disaster,” O’Neill warned.

So far, turmoil is brewing in places where investors don’t pay too much attention. However, the crisis could broaden as the Fed hikes and pandemic debts become unpayable as soaring inflation triggers social unrest. If the dominos fall, then investors will care.