After LA County’s public health czar ordered that masks must be worn indoors, NYC Mayor Bill de Blasio confirmed that he wouldn’t follow in LA’s footsteps, and that NYC would continue to focus on bolstering the city’s vaccination rate. 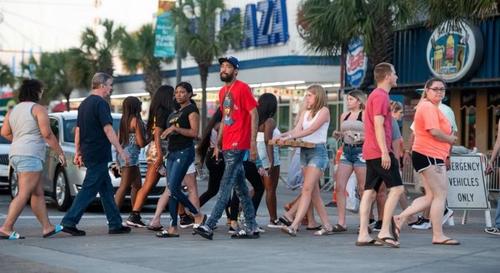 Less than a week later, Bloomberg reports that NYC’s vaccination rate has plunged to less than 15K a day, from more than 100K a day in mid-April. Meanwhile, the number of new cases reported in the city has climbed: NYC reported a seven-day average of 576 confirmed and probable cases on July 18, more than double the average on July 6. Hospitalizations have also increased slightly, and practically everybody hospitalized hasn’t been vaccinated.

Hospitalizations are almost entirely comprised of patients who haven’t been vaccinated, according to NYC’s top public health official.

Cases of COVID-19 are increasing in NYC. Currently, hospitalizations are almost entirely of people who have not been vaccinated. This is preventable suffering.

I’ve heard from New Yorkers who are waiting for the right time to be vaccinated — that time is now. pic.twitter.com/4Ae76dOz0M

This could portend a reversal by the notoriously hapless NYC Mayor, as CDC Director Rachel Walensky – whose blatant fearmongering has courted controversy in the past – warned during her Senate testimony on Tuesday that the highly transmissible delta variant is now responsible for 83% of all sequenced COVID cases in the US, up from 50% in early July.

Anxieties about the Delta variant are prompting more companies to reconsider sending employees back to the office. On Tuesday, Bloomberg reported, citing several Apple insiders, that Apple management has delayed employees’ return to the office until October, or possibly even later.

Across the US, both cases and deaths have continued to creep higher. 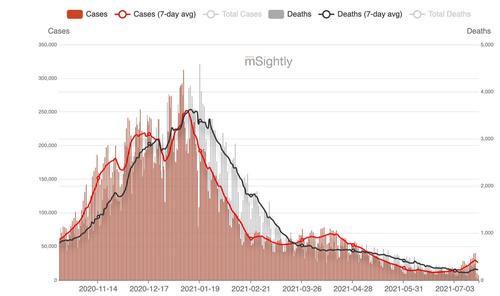 Hospitalizations have also started to climb, with Dr. Fauci assuring the public that more than 90% of those being hospitalized haven’t gotten the vaccine. 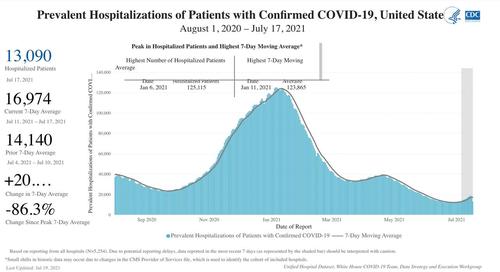 Source: mSightly
However, the perceived “risk” level varies dramatically from state to state due to differences in vaccine acceptance. 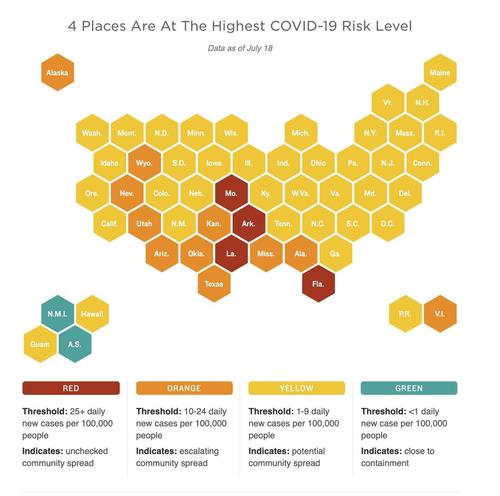 Source: mSightly
And Arkansas has become the most ‘high-risk’ state in the country.

Source: mSightly
Looking at the projections from the University of Washington’s IHME, the most closely watched in the US (even if they haven’t exactly proved reliable), the university expects the US death toll to continue to climb.

Source: mSightly
Presently, more than 608K Americans have died from the virus so far, while more than 34,100,000 cases have been confirmed. Globally, Indonesia is preparing to lift restrictions while Singapore recently returned to lockdown. In Europe, health authorities say that French President Emmanuel Macron’s tough approach to vaccinations has helped encourage more to get vaccinated. 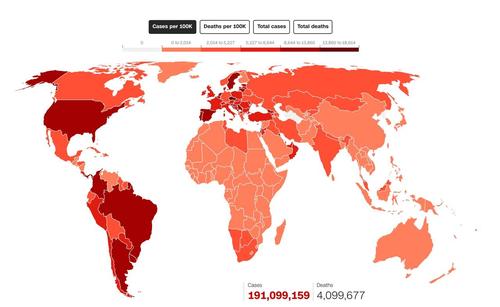 Internationally, Europe and Asia are contributing the most new deaths to the global tally, which presently sits at 4.1MM. 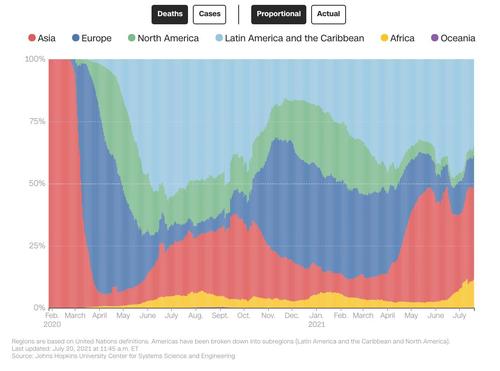