With oil tumbling almost 10% this morning, one would think that a major oil consuming country has suddenly gone dark, plunging into a deep depression. 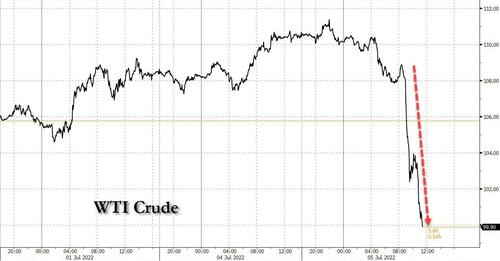 The answer, as so often happens, is just the opposite, and in fact on Tuesday Saudi Arabia raised next month’s oil prices for its biggest market of Asia to match all time highs, amid signs that underlying demand is soaring despite what one would concludes are growing recessionary concerns if only merely looked at the price of oil.

As shown in the chart below, oil giant Saudi Aramco raised its key Arab Light crude grade for Asian customers by $2.80/bbl from July to $9.30 above the regional benchmark, just 5 cents shy of a record high! 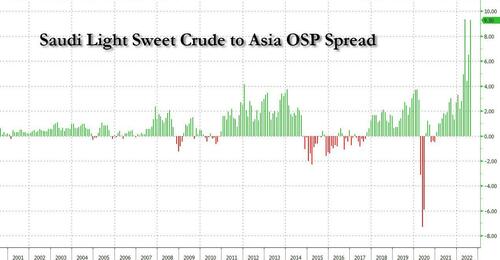 The Saudis also lifted the prices of all other grades for Asia in August, with Extra Light at a record premium. Aramco announced smaller increases in the prices of Extra Light, Arab Light, and Medium to both the Mediterranean region and northwest Europe. All prices for the U.S. market remain the same as last month’s, Bloomberg reported.

The market viewed the price increase as a sign that the world’s top crude oil exporter expects robust demand this summer despite growing fears of a recession that could sink demand.

The Saudi price spike takes place as Russia’s seaborne crude exports in the seven days to July 1 rebounded from the previous week’s plunge, but shipments to Asia are slipping, even as flows are diverted to the country’s Black Sea terminal to cut the voyage distance to India. As a reminder, we noted over the weekend that Russia is now exporting more than it did before the Ukraine war courtesy of soaring India and China imports. 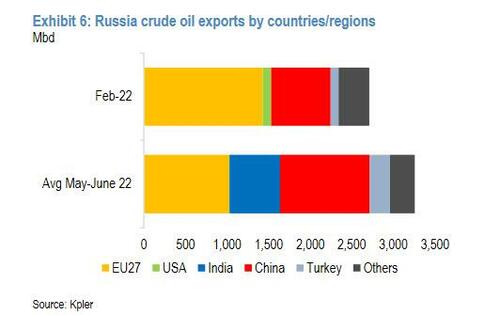 Aggregate crude flows from Russian ports were up week-on-week by 23%, recovering most of the volume lost over the previous seven days during a brief halt in shipments from the Baltic port of Primorsk. Still, cargoes bound for Asia — a crucial market where China and India have stepped in to prop up Russian exports others have shunned in response to its invasion of Ukraine — were down by more than 15% on both a weekly and four-week average basis from the highs seen at the end of May.

Overall, Russia’s seaborne shipments returned to 3.67 million b/d, broadly in line with the plateau level achieved since the start of April.

In other words, with Russian supply to Asia suffering a modest hiccup, it was Saudi Arabia’s turn to step up and it did so at a near record price, a price which China incidentally had no problem paying because half a world away, a bunch of CTAs dumped oil because some other CTA dumped oil before them and the momentum-chasers all piled on, for which Beijing is very grateful.

2 hours ago
Whitehead: The Constitution Has Already Been Terminated

3 hours ago
Self-Service Kiosks Are Crawling With Fecal Bacteria: Study

2 hours ago
Whitehead: The Constitution Has Already Been Terminated

3 hours ago
Self-Service Kiosks Are Crawling With Fecal Bacteria: Study