Submitted by Gun Owners Of America.,

The ATF has finally unveiled its “final rule” regarding pistol braces.

This rule, also called “Factoring Criteria for Firearms with Attached Stabilizing Braces,” could result in serious criminal charges for owners of up to 40 million guns if they do not register their braced firearms with ATF.

GOA’s Legal & Federal Affairs team are currently going over the final rule with a fine-toothed comb, but here’s what we know so far.

According to the final rule, gun owners who possess braced firearms will have 120 days to destroy, reconfigure, register, turn in their firearms to ATF, or face NFA violations which include $250,000 in fines and a hefty prison sentence. 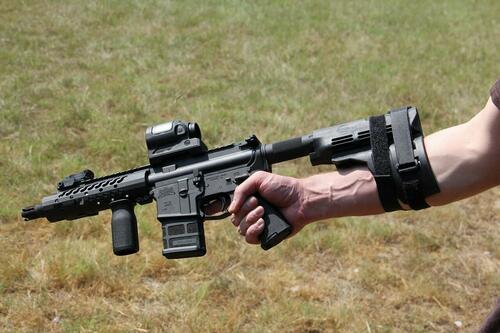 In addition, ATF has released a list titled “Commercially available firearms equipped with a stabilizing brace that are short-barreled rifles.”

ATF claims that the list is representative of how the agency will apply the definition of “rifle” to firearms equipped with a stabilizing brace.

The immediate logistics of this final rule have been called into question by even the anti-gun corporate media. It is a well-known fact that ATF’s NFA division consistently misses its own performance benchmarks and routinely sees wait times for ATF form approvals and tax stamps in the 300-400 day range. If 40 million firearms are added to that waitlist, it is logical to assume that gun owners forced to comply with this unconstitutional registration scheme may wait years in limbo.

The first is to work with members of Congress to overturn the rule via the Congressional Review Act.

The Congressional Review Act allows members of Congress to introduce a Joint Resolution of Disapproval to reverse any agency rule or action they deem unconstitutional.

Of course, if Congress doesn’t cooperate, GOA will not give up. We are prepared to file a lawsuit immediately and fight this subversion of the lawmaking process in the court system.

Erich Pratt, Gun Owners of America’s Senior Vice President, had this to say:

“This administration continues to find new ways to attack gun owners, and this time their target is brace-equipped firearms that allow persons with disabilities to safely and effectively use pistols. We will continue to work with our industry partners to amplify the disapproving voices in the firearms industry, and the Gun Owners Foundation, our sister legal arm, will be filing suit in the near future.”

“President Biden just initiated the largest federal gun registration scheme in our nation’s history without even the passage of a new law. GOA is actively working with Congress to pass a resolution blocking this rule under the Congressional Review Act, and we continue to lobby lawmakers to support Rep. Clyde and Sen. Marshall’s Stop Harassing Owners of Rifles Today (SHORT) Act. If President Biden will not sign such legislation, then Congress must defund this rogue agency.”

GOA has a history of overturning these unconstitutional rule changes. In 2020, when the ATF under the Trump administration attempted to regulate pistol braces, GOA rallied our members to take action. GOA members flooded the proposed rule with comments. Because of this, ATF abandoned its attempt and withdrew the rulemaking.

While GOA is prepared to take the ATF to court over this issue, we’re interested in cutting the ATF’s ability to regulate Short Barreled Rifles, Short Barreled Shotguns, and similar types of firearms.

To strip the ATF of its ability to regulate these types of firearms, we’re targeting the core of the issue, the National Firearms Act. The outdated and unconstitutional NFA allows ATF the leeway to make these unconstitutional rule changes. We’re working with Senator Roger Marshall of Kansas and Congressman Andrew Clyde of Georgia to pass the SHORT Act, which would remove Short Barreled Rifles and Shotguns from the NFA.

But we can’t do it alone. We need your help fighting back against the rogue ATF and the anti-gun Biden administration. Help us fight by calling your Senators and Congress members and asking them to support the SHORT Act and the Joint Resolution of Disapproval.

We’ll hold the line for you in Washington. We are No Compromise. Join the Fight Now.