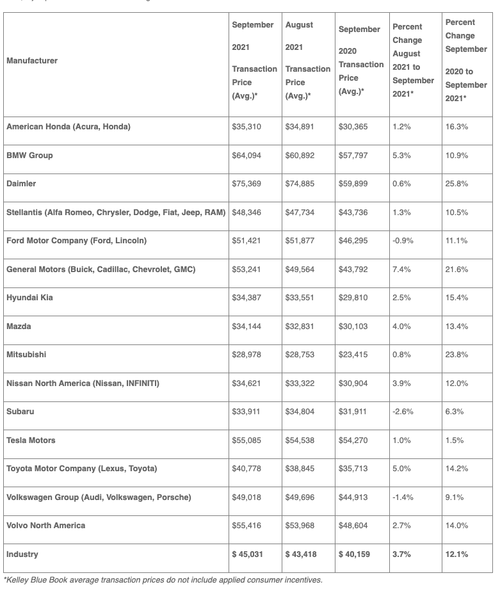 “The record-high prices in September are mostly a result of the mix of vehicles sold,” said Kayla Reynolds, an analyst for Cox Automotive.

“Midsize SUV sales jumped in September compared to August, and full-size pickup share moved up as well. Sales of lower-priced compact and midsize cars, which had been commanding more share during the summer, faded in September,” Reynolds said.

All-time-high prices come as the entire industry endures a slowdown in sales. Total sales last month were approximately a million cars, a 7.3% monthly decrease, and one of the lowest volumes in the past decade.

Dwindling sales are likely a function of two things, a worldwide shortage of microchips that have shuttered many automobile factors and possibly higher prices are creating demand destruction among buyers.

Over the last year, dealership inventories have been tight due to supply chain difficulties and forced dealers to reduce incentives and discounts to prospective car buyers. Incentives were only 5.2% of the average transaction price last month, compared with 10% a year ago.

Another issue for buyers is the staggering increase in used cars, which hit a record high last month. 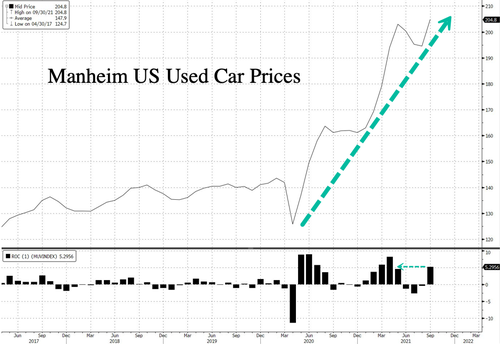 To sum up, fewer cars were sold last month, but prices continue to hit record highs that may suggest consumers are becoming discouraged to buy because of affordability issues.