On August 3rd, more than two centuries ago in 1804, America was at war, engaged in the midst of conflict that lasted for more than three decades between Americans and Muslim Islamicists/terrorists, now known as the Barbary Powers War. Five Muslim nations in North Africa and the Middle East (a region that was the home to the Berber people, resulting in the name Barbary Powers) regularly attacked American ships and citizens traveling in the Mediterranean region. (Below is a 1736 map of those nations from the WallBuilders collection.)

Seeking an end to those unprovoked attacks, in 1784 Congress dispatched Thomas Jefferson, John Adams, and Benjamin Franklin to negotiate with those terrorists. At that time, America lacked a military capable of protecting Americans overseas, so the only solution was marking large “payments” (that is, paying extortion money) to those Muslim nations in exchange for safe passage for American ships and citizens. Those payments rose to fifteen percent of the federal budget, and President George Washington requested that Congress fund a permanent navy to protect Americans overseas. 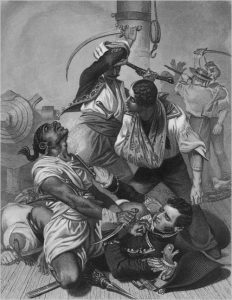 President John Adams oversaw the construction of the Navy, and when Thomas Jefferson became president in 1801, he ordered a stop to any further extortion payments. Tripoli (now Libya, the home of Benghazi) officially declared war on America. Jefferson dispatched the Navy and Marines to the region, and on August 3, 1804, Commodore Edward Preble and General William Eaton began attacking Tripoli, eventually bringing them to the peace table in 1805.

The following year, the first American edition of The Koran was published (the title page for this Koran, from the WallBuilders collection, is pictured on the right). Americans were encouraged to see for themselves what the Koran actually taught so they would understand why we had been attacked and forced into a war. Significantly, the editor’s preface told readers:

Thou wilt wonder that such absurdities have infected the better part of the world and wilt avouch, that the knowledge of what is contained in this book, will render that [Sharia] law contemptible.

In short, if you read the Koran, you will understand their unprovoked attacks against us. But the fighting still wasn’t over. While America was engaged in the War of 1812 against Great Britain, Algiers (one of the Muslim Powers that had negotiated a peace treaty with the US in 1795) declared war on the United States. President Madison was unable to take any action until the war was concluded in 1815, at which time he dispatched the American Navy back to North Africa, where it easily achieved victory over Algiers. Tunis and Tripoli also agreed to American demands for peace treaties, thus finally ending a conflict with Muslims that had spanned more than three decades and involved America’s first four presidents.

The Bible reminds us in Ecclesiastes 1:9 that “There is nothing new under the sun.” Technology may change from generation to generation, but human nature stays the same; and this has certainly been the case with centuries of unprovoked Muslim attacks against Americans. May our American service members experience the blessing that King David announced over his troops long ago:

Through God we will do valiantly,
For it is He who shall tread down our enemies.
Psalm 60:12

Want to Find Out More?

(Available as CD or mp3)