Behind The Plunge In Yields: This Is A Growth Story, Not A Rethink Of Inflation

By Ian Lyngen, head of US Rates Strategy at BMO Capital Markets

In a notable turn of events, the overnight session saw an initial attempt at a modest reversal in the recent Treasury rally only to be met with further buying interest. The net result was a tick lower in 10-year yields that brought the benchmark to levels not seen since mid-February. 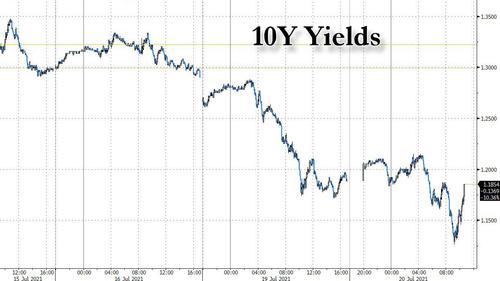 With the next technical target sill 5 bps away, we’ll be watching the interplay between risk assets and US rates as the delta-inspired repricing continues. We’re cognizant that the severity of the recent move has led to stretched momentum measures, implying incremental gains will be more difficult to achieve. This isn’t to suggest the floor for rates is evident at the moment, rather that it should be anticipated that the pace of the rally will slow. There has been plenty of chatter surrounding the possibility 10- year yields dip below 1.0%; an eventuality that would be a short-lived endeavor, but not one that’s off the table. More immediately however, will be gauging the extent to which rising case counts can carry yields even lower from here.

It would be an oversimplification to conclude this move is entirely a function of the economic risks posed by the reinstatement of covid-19 restrictions. In fact, we’ll argue the rally has been exaggerated by the Fed’s most recent efforts to be less dovish. Policymakers are in the pre-meeting radio period of radio silence; which eliminates the potential for any official commentary on the Fed’s take on the renewed pandemic risks. Moreover, it leaves investors operating under the assumption that 1) tapering is still on track, 2) rate hikes as early as next year could come to fruition, and 3) the Fed’s ‘will act if not transitory’ stance on inflation remains value. While these surely still hold true to some extent, the implied commitment may be waning given investors’ response to the recent covid developments.

Headlines this morning conclude ‘markets no longer worried about inflation’; a notion, which is ostensibly consistent with the price action in US rates, misses the mark. 10-year breakevens are still at 225 bp and a distance away from the mid-June lows. In addition, rising supply-driven inflation that functions as a tax on consumption as opposed to a reflection of a healthy real economy creates downside risks for the recovery. When combined with concerns that H1 will represent the peak of the rebound, it follows intuitively that the market has moved on to trading the next stage in the cycle – i.e. recalibrating growth expectations in reflecting the new norm; one in which herd immunity will prove elusive and variant risks (delta and others) become an ongoing concern. A quick glance at real yields near -100 bp reinforces the read that this is a growth story, not a collective rethink of reflation.

There is yet another nuance of the price action that merits highlighting. Specifically, the move thus far has questionably been a flattening event as 10s and 30s outperform. The front end of the curve has benefited to a lesser extent as monetary policy expectations have remained in place. This morning however, we’re starting to see the 5-year sector lead the rally. In the event we’re seeing the transition from a longer-term growth story to further pricing out Fed tightening, this could ultimately serve to moderate the gains in 10s and 30s. This isn’t to suggest that less room for the FOMC to eventually normalize policy rates is a compelling reason to sell duration in the face of a resurgence of the pandemic. Instead, confidence that monetary policymakers won’t be so eager to respond to pockets of reflation given the renewed headwinds facing the global recovery

We’ll be tracking this particular evolution in the nature of the bullish repricing if, for no other reason, it will be instrumental in gauging what to anticipate in response to next week’s FOMC meeting and Powell’s press conference. Note that in light of the +8.1% consensus estimate for next week’s release of Q2 real GDP, there is little question that a strong rebound in H1 is priced in and investors have shifted toward trading the next stage in the recovery that contains far greater uncertainties.

If the move in real yields is any indication there is growing angst on the rebound; 10-year real rates reached their lowest level since early January and within striking distance of the cycle low at -112.4 bp. 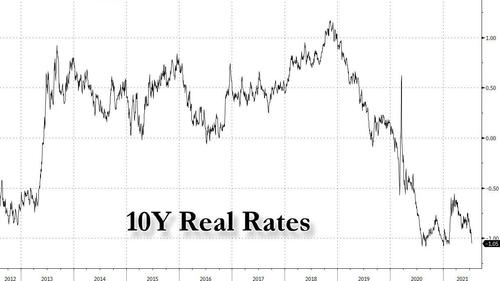 The decline in reals is made all the more noteworthy given the proximity to Thursday’s $16 bn new issue 10-year TIPS auction. Current valuations demonstrate not only increasing worry on the spread of the delta variant domestically, but perhaps more consequentially, overseas. Whereas there was once a time when the US rates landscape was solely dictated by the domestic fundamentals, the globalization of the economy and markets now leave Treasury yields a function of the global backdrop. This helps account for the impressive round of bullishness and durability of the bid for USTs even as the data has generally continued to perform well. We’re reminded of the time tested adage that resistance hardly holds on the third attempt, and will monitor the -112 bp line in the sand in 10-year real yields over the balance of the week.