Authored by Damien Ma via MacroPolo.org,

From ventilator and chip shortages to what kind of ships traverses through which canals, the linkages and nodes of the global economy have rarely been in the spotlight as much as they have over the last 12 months. Many of these disruptions are short-term ones, but they have also brought attention to longstanding challenges of supply chain resilience and dependence.

One of those challenges is that of China’s grip on rare earth elements (REEs), a key input in permanent magnets that are in everything from smart phones and wind turbines to electric vehicles and missile guidance systems. 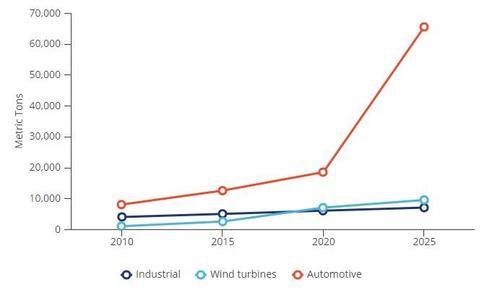 This is not the first time these 17 elements that sit at the bottom of the periodic table have raised alarm from Tokyo to Washington. Back in 2010, Beijing was roundly accused of embargoing REE exports to Japan as Sino-Japan relations soured.

At the time, China was responsible for some 90%-plus of REE supplies globally, even though its estimated reserves are around just 25%-33% of the global total. Given the wide belief in Japan and the United States—which also happen to be the largest importers of REEs—that China could weaponize this resource, its supply monopoly raised hackles and intensified calls for diversification.

A decade since, has much changed? I had trekked to Inner Mongolia’s Baotou Rare Earth Hi-Tech Zone back in 2010 to gain more insight into China’s designs on the REE industry and how that affected the global market. It’s worth revisiting this industry now to understand how its dynamics shaped Beijing’s thinking and intent on managing this resource.

“Selling gold for the price of radishes”

China has long viewed REEs as a strategic resource, with the industry’s development spurred by a quip supposedly attributed to Deng Xiaoping: “The Middle East has oil, but China has rare earths.”

Yet as China became the dominant supplier of REEs over subsequent decades, it saw the price of REEs plummet, hardly the price-setting influence that an OPEC exerted on oil prices. That frustrated the economic nationalists in Beijing, grumbling that China was essentially “selling gold at the price of radishes.”

Much of that frustration stemmed from the government’s inability to regulate a wild industry that was rife with smuggling. At one point in 2011, it was estimated that there was a gap of 120% between REE volumes that China officially exported and what other countries imported. Meanwhile, REE mining was also exacting a hefty environmental toll.

The Chinese government decided it needed to consolidate the REE industry. Beijing thought it could clean up the illegal business, while also receiving some of that price-setting power that has long eluded it. What’s more, the move also dovetailed with rolling out the original “strategic emerging industries” initiative, the start of China’s effort to indigenize supply chains and move up the value chain.

In other words, why export this resource for pennies when China should keep more of it for its own tech industries of the future?

This is where Baotou comes into play. Part of the industry restructuring was intended as a “resource for technology” play. That is, instead of exporting REEs, China did what it knows best: set up zones to attract high-tech manufacturing investment in exchange for easy access to critical materials. Baotou, of course, was and still is China’s largest production base of REEs.

Did the strategy work?

Although economic nationalist in orientation, China’s REE policy was a far cry from banning exports (see Figure 2). The stringent export quotas in the 2011-2012 period certainly drove a spike in prices, but that was short-lived. By 2014, it became apparent that China was ramping up exports rather than reducing them, and prices quickly corrected and have remained relatively low since. The reality reflects Beijing’s perennial struggle in imposing its will on a fragmented, messy, and profit-driven industry.

Figure 2. China’s REE Exports Have Not Declined Over Last Decade 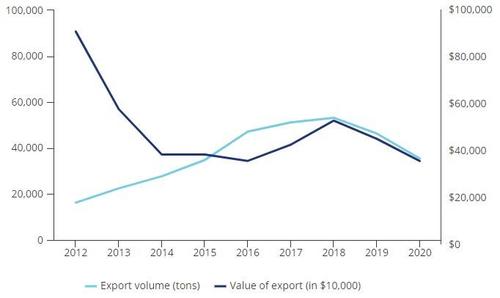 It is also not entirely clear whether an actual embargo took place in 2011 or whether it was the result of Beijing’s export quotas. But whatever the judgment in hindsight, the damage has already been done to China as a reliable supplier of REEs, leading to gradual resource diversification. China is now just under 60% of global REE production (see Figure 3). 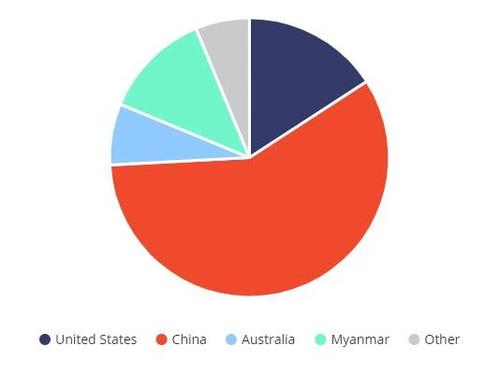 The relative abundance of REE reserves globally, it turns out, means that China’s bid for price-setting power rested on faulty assumptions of its leverage. Despite national security hawks’ continued pitch for exercising pricing power, Beijing seems to have recognized that it no longer has a monopoly on production.

Instead of obsessing over what’s in the ground and how much to sell it for, China appears to have shifted tactic to redouble its effort on developing the midstream REE processing industry and downstream end products like magnets.

A clear indication of that focus was President Xi Jinping’s recent visit to Jiangxi—a major hub of REE production. Rather than a mining operation, Xi toured JL Mag, a downstream company that supplies magnets to the likes of Goldwind and BYD. We will look further at the midstream and downstream dynamics of the REE industry in future analysis.