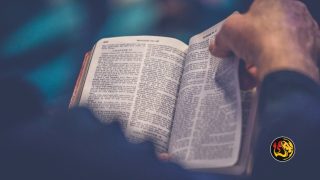 DOHA (Worthy News) – As crowds enjoyed soccer in the bloodstained stadiums of Qatar hosting the 2022 World Cup after thousands of migrant workers were killed, Christians began distributing Bibles in 14 languages.

The Scriptures distributing Bible Society said many attending the month-long World Cup would receive New Testaments and the Gospel of John as part of mass evangelism efforts.

“Our mandate as a Bible Society is to light hope, care, and love in the hearts of thousands,” added Hrayr Jebejian, general secretary of the ‘Bible Society in the Gulf.’

He called the World Cup “a great opportunity” to preach the Gospel.

“The plan is to reach migrant workers and World Cup international visitors through the distribution of the Gospel of John and the New Testament in Arabic, English, French, German, Hindi, Italian, Malayalam, Nepali, Portuguese, Sinhala, Spanish, Tagalog, Tamil, and Telugu.”

It wasn’t clear how it would distribute Scriptures in a nation where Christians have complained of persecution and non-Muslim religious materials could be confiscated.

Yet despite reported difficulties, the Bible Society said it also supports churches and the establishment of new Christian congregations in the Islamic nation through distributing Bibles and training courses for pastors.

With the world focused on the World Cup, the Bible Society and others want to encourage the nearly 400,000 Christians in the country of 2.8 million people amid reported Islamic oppression.

Most Christians in Qatar are migrants, and investigators said these believers “face pressure and discrimination, and their churches are often heavily monitored by the government.”

Christian women and girls are particularly in danger of having their freedoms “severely curtailed” by Muslim families, including by house arrest without access to the outside world, said Christian advocacy group Open Doors.

Qatar punishes conversion from Islam with “loss of status and legal difficulties concerning property and child custody. Similarly, a Christian from a Muslim background isn’t permitted to marry a non-Muslim,” Open Doors noticed.

The Gulf state is among the countries that rose the most on the Open Doors World Watch List (WWL) of 50 nations where it says it is most challenging to be a Christian. Qatar jumped 11 places compared to the previous year and currently ranks 18th on the annual WWL. “The main reason was an increase in violence, and most house churches having to stay closed,” even after the coronavirus pandemic, Open Doors said.

“Services for foreign migrant workers are permitted at a designated compound. As it is too small for the expatriate Christian community, the government had previously unofficially accepted this community meeting in house churches,” Open Doors explained. However, “These had to close during the most intense Covid-19 restrictions – and have not been permitted to re-open when the restrictions were broadly lifted.”

Open Doors said it prays that the World Cup “will draw attention to the challenges facing Qatar’s Christians and bring about greater religious freedom.”

Despite the difficulties, a migrant worker identified as Pastor Samuel, which isn’t his real name, helps other foreign Christians in Qatar to “spread the Gospel.”

Samuel said he realized that he and other believers “are limited in evangelizing too openly. But nobody can stop us from talking to fellow workers and witnessing [about our Christian] faith to them in our everyday lives.”

In comments distributed by Open Doors and monitored by Worthy News, the pastor acknowledged that evangelism could be dangerous in Qatar.

He explained that one of the seven men he teaches about the Bible and evangelism expressed worries about sharing his faith in the strict Islamic country. Samuel said he told him that “Fear is always reminding me of the strength there is in the Word of God. Real courage is to depend on Him totally.”

The pastor noted, “every day, God gives us opportunities to show His love to others. Many of those we’ve encountered in Qatar testified that they came to the country for the opportunity to earn more, but God had a greater plan.”

Referring to Christ, Samuel added that migrant workers “encountered the King of Kings” who does “not only provide them with a ‘better life’ but with life everlasting.”

The search for Christian faith comes as many migrant workers recover from their hardships while building stadiums and other infrastructure for the world’s costliest soccer event in decades. And most migrant laborers cannot effort to attend the matches of the first World Cup to be held in the Middle East.

Still, they are lucky to be alive: Thousands of workers died during Qatar’s World Cup-related construction, far more than in the run-up to every other World Cup or Olympic Games in the past 30 years combined, according to several rights investigators.

Qatar’s government has denied wrongdoing saying: “Although each loss of life is upsetting, the mortality rate among these communities is within the expected range for the size and demographics of the population.”

Thousands of miles away, a German artist lit a stadium with 20,000 candles to remember the migrant workers who died in Qatar. The world soccer’s governing body FIFA and the Qatari government are accused of putting profit before human rights with the current World Cup, charges they deny.

The action by artist Volker-Johannes Trieb and Germany’s workers’ welfare agency AWO commemorated more than 15,000 migrant workers who died in Qatar in the past decade, according to Qatari government statistics.

Some 6,500 footballs filled with sand were also placed on the playing field in the Herne stadium, reflecting another estimate of migrant deaths provided by non-Qatari governments.

The action was titled: “World conscience, you are a blight.”