The Biden administration doesn’t seem to be sold on using the Defense Production Act to spur production of semiconductors domestically, according to a senior administration official that spoke to Reuters this week.

“The short-term outlook is challenging,” they commented, when asked about invoking the law. Moving semis to automakers “would result in fewer chips for others,” they said. This would transfer the negative impact of the shortage to consumer electronics, from automakers.

The idea of using the 1950 law to force companies to produce semiconductors for national security reasons was brought to the attention of the White House by automakers who have seen their production interrupted by the supply chain seizure.

Even “many auto industry officials” have said privately that they do not think invoking the act would be likely. Another person close to the Biden administration commented: “This is the worst nightmare if you’re a supply chain manager. As a nation, it’s terrible.”

The administration is in the midst of a 100 day review, and then plans to figure out ways to “incentivize and encourage production at home and surge capacity.”

Recall, yesterday we reported that Taiwan Semiconductor was going to try and address the domestic production issue by building “several more” chipmaking facilities in Arizona, beyond one it already has planned. 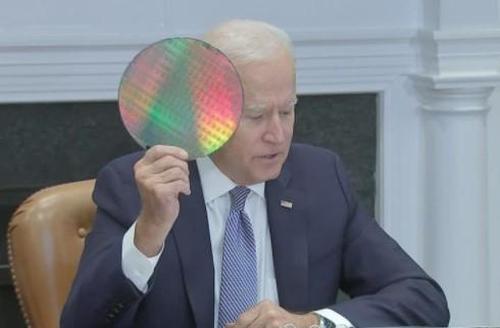 Days prior, we wrote an article that highlighted how Intel had pointed out the lack of semi chip production in the U.S., amidst estimates that the shortage could last well into 2022.

Commerce Secretary Gina Raimondo called for a “major increase” in U.S. production capacity of semiconductors this week. On Tuesday, she commented: “Right now we make 0% of leading-edge chips in the United States. That’s a problem. We ought to be making 30%, because that matches our demand. So, we will promise to work hard every day, and in the short term also see if we can have more chips available so the automakers can reopen their factories.”

The chip crisis has hit the auto industry so hard that it has forced rental car companies – already under immense pressure from ride sharing companies – to buy up used cars at auction to fulfill their inventory needs, Bloomberg also noted this week.

Maryann Keller, an independent consultant who used to be on the board of Dollar Thrifty Automotive Group, commented: “You would never go into auction to buy routine sedans and SUVs. These are special circumstances. There is a shortage of cars.” We noted last month how these special circumstances have driven up the price of used cars.

Last week, Ford was the latest auto manufacturer to slash its expectations for full year production as a result of the shortage.

In early April, we wrote that U.S. exporters of semiconductor chipmaking tools were struggling to get licenses to sell to China. The U.S. government had been dragging its feet in approving licenses for companies to sell chipmaking equipment to Chinese semi company SMIC, we noted at the time.