We can almost feel the xenophobia intensifying.

As we wait for President Biden to confirm the new travel restrictions that have been reported Tuesday and Wednesday (the president is expected to announce them on Thursday) Reuters reported Wednesday morning that it has seen a copy of a letter from the CDC asking airlines to turn over the names of all passengers who traveled to the US from any of the southern African nations. 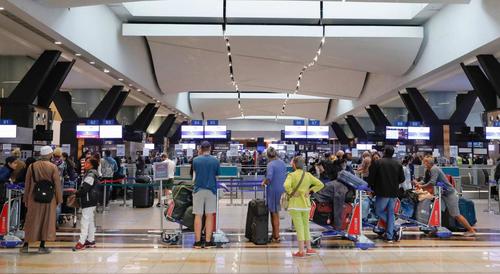 Once it has all the names, the CDC plans to turn them over to state and local public health departments. These authorities may then require these travelers to be retested, or perhaps even ask them to quarantine – measures they intend to enforce. Keep in mind, the US still hasn’t confirmed a single case of omicron.

The south African countries in the blue ring believed to pose the highest risk of infection…despite the fact that the UK has reported the highest number of confirmed omicron cases with 22, while the Netherlands has confirmed cases of omicron stretching back at least two weeks ago. Evidence suggests the new variant has likely already gone global. 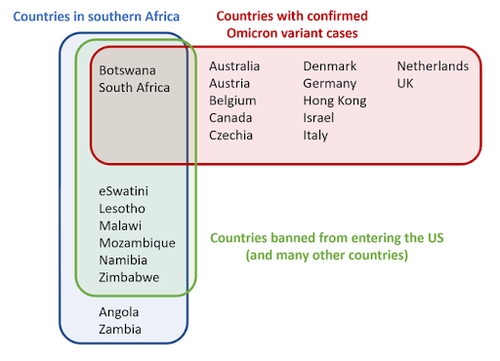 This dichotomy between how the world is treating southern African countries vs. developed nations like the UK is making some people increasingly uncomfortable.

Others have posited that the EU and US are using omicron as an excuse to tighten restrictions on the border and on society and businesses amid the EU’s most recent resurgence in cases.

Some 56 countries were reportedly implementing travel measures to guard against Omicron as of Nov. 28, the WHO said, and WHO head Dr. Tedros Adhanom Ghebreyesus said he was concerned that several member states were “introducing blunt, blanket measures”, which “will only worsen inequities”.

In Germany, which is battling a surge in COVID cases and deaths, recently announced that four fully vaccinated people had tested positive for omicron in the south, but they had only moderate symptoms.

The CDC lists about 80 foreign destinations as “Level Four” countries, the highest level of COVID transmissibility. The US discourages Americans from traveling to those destinations, and also would prefer if people who live in those countries don’t travel to the US right now.