Former deputy National Security Adviser K.T. McFarland noted only a short time ago that not even an administration assembled by Joe Biden could “screw up” the Abraham Accords brokered by President Trump and his administration.

But maybe it can.

Or at least it can suppress the name to change the dialogue about them.

A report from Israel365news explains that not only is the Biden administration actively suppressing the name of the historic Trump-brokered deals between multiple Arab neighbors and Israel, it apparently is trying “to dismantle to Abraham Accords in order to realign the U.S. with Iran and strengthen the Islamic regime.”

A report in Tablet explained, “The alliance between Israel and the Gulf states is an impediment to the dream of a re-empowered, nuclear-armed Iran backed by the United States, which was Obama’s main foreign policy aim – and an affront to peace processors convinced of their own never-ending importance.”

The report continued, “The Biden administration apparently aims to sink the accords by penalizing Israel and its peace partners for getting too close, and returning the Palestinians to center stage – in order to prepare the ground for reentering the Iran deal.”

There have been tense strident exchanges regarding the name of the agreements.

This awkward exchange between @APDiploWriter and @StateDeptSpox about the ever-elusive name of the peace deals between Israel and its Arab neighbors is—dare I say—Price-less. It’s also instructive about the Biden Administration’s regressive approach to the Middle East. pic.twitter.com/OwwSoEqRU8

The Free Beacon explained that the Biden State Department “discourages employees from referring to the historic peace agreements signed by Israel and its Arab neighbors by its official name, the Abraham Accords, according to one source with direct knowledge of the Biden administration’s internal decision-making process and emails reviewed by the Washington Free Beacon.”

Instead, the Biden administration is calling the deals “normalization agreements,” the report said.

In fact, the “Accords” name “has also been erased from a wide array of official State Department communications,” the report said.

They were negotiated last year by the Trump administration “and paved the way for Israel to make peace with traditional Arab foes, including the United Arab Emirates, Bahrain, and, later, other Muslim nations,” the report said.

“The Free Beacon reviewed two internal State Department emails detailing to employees that the agreements will no longer be referred to as the Abraham Accords but only as ‘normalization agreements.’ No reason was given for the policy, the source said. The department also purged the term ‘Abraham Accords’ from its talking points, documents, statements, and official communications, the source said, adding that senior department officials have been very ‘cagey’ about explaining the policy decision and have sought to keep it quiet.”

Victoria Coates, who was on Trump’s National Security Council, said, “The Biden administration’s attempt to diminish and marginalize the Abraham Accords by referring to them as ‘normalization deals’ is both unfortunate and insidious. It’s a shame to try to undermine such a monumental, historic achievement because it was reached by the previous administration. But the term ‘normalization’ is even worse—as they are well aware, the term carries a regional stigma, particularly with the Palestinians, of being a sell-out. The Abraham Accords are so much more and should be given the same bipartisan support as the peace treaties between Israel, Jordan, and Egypt reached by Democrat administrations.”

The deals – there were reports more were pending when Trump left office – are with Morocco, Bahrain, Sudan and the United Arab Emirates.

McFarland noted, “It’s the first peace agreement between Israel and Arabs in not just 10 or 20, it’s like a couple of thousand years. What President Trump has done, as everybody was paying attention elsewhere, he was able to craft an agreement and convince the Arabs that their only sort of prosperity platform, the only way they could get to peace and prosperity, was by having a peace agreement with Israel.”

President Trump’s plan for the Middle East involved going directly to Israel’s Arab neighbors, and bypassing the Palestinians, who long have been an obstruction for any peace plans.

President Trump was nominated for a Nobel prize based on his work on the agreements.

“And it is America that is brokering these deals with Israel and these Muslim nations,” he pointed out. 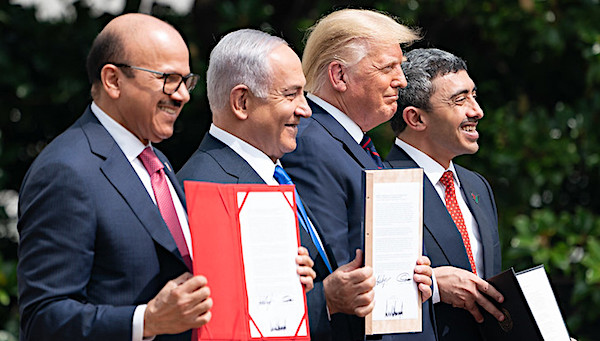