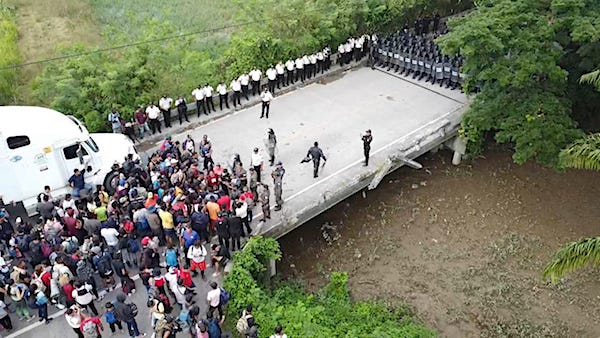 Migrants on bridge over the Motagua River between Guatemala and Honduras in October 2022. (Courtesy of Guatemalan President Alejandro Giammattei’s office)

The State Department launched the Welcome Corps Thursday to provide American citizens with the opportunity to privately sponsor refugees. The program works with a consortium of organizations, including the Church World Service (CWS), a faith-based nonprofit group that has in the past advocated for abolishing ICE.

In a 2021 tweet, the CWS tweeted the hashtag “AbolishICE.” The organization has also advocated to pull funding from the government agency.

“Instead of providing excessive and immoral resources for inhumane treatment of immigrants and asylum seekers, the United States should put those resources into programs that expand our capacity to welcome immigrants with the dignity and respect everyone deserves,” the CWS said in September.

The organization’s involvement with the Biden administration, however, doesn’t stop there. The organization was also tapped to head the Department of Homeland Security’s (DHS) Case Management Pilot Program to monitor illegal immigrants awaiting their court dates in the U.S., Fox News reported in October.

Should the Biden administration partner with an organization trying to abolish ICE?

The group’s new role means it will help implement Americans’ sponsorship of refugees with U.S. government funding, according to the State Department. The CWS will oversee “vetting and certification of private sponsors through an application process,” give training to refugee sponsors and monitor the sponsorships.

“We are thrilled to support Welcome Corps as it expands the joy of sponsorship to new groups and communities across the United States and increases our nation’s capacity to resettle refugees.” CWS CEO Rick Santos said in a statementThursday of the State Department’s new program.

“The Welcome Corps builds upon a decades-long proud tradition of community sponsorship and local partnership in refugee resettlement. We look forward to more communities having the opportunity to experience the life-changing work of sponsorship by coming alongside new arrivals with the friendship and support they need to thrive,” Santos added.

Neither the State Department nor the CWS responded to requests for comment.