British Prime Minister Boris Johnson treated President Biden to an enthusiastic welcome after he arrived in Cornwall for the president’s first trip abroad since his inauguration. Despite worries about lingering differences between the two leaders, Biden & BoJo treated the reporters present to an exuberant press conference where the two leaders waxed poetic about the importance of the bilateral relationship, before holding a ceremonial (but largely hollow) ceremonial re-signing of the Atlantic Charter, a document originally signed by FDR and Winston Churchill.

Biden and his team are big fans of this type of historical regurgitation – as if holding Biden in stark relief to past presidents like FDR or JFK will somehow make him seem more presidential. And it appears BoJo was more than happy to join in the fun. Of course, as the two leaders continued on with nary a mention of the post-Brexit trade tensions that have prompted Biden to speak out against BoJo several times already. 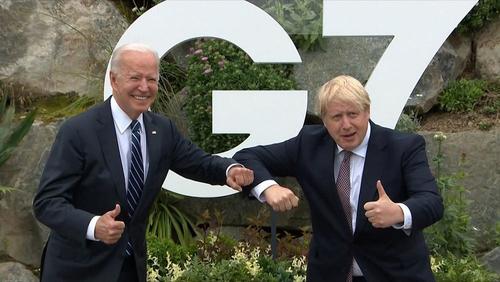 “Prime Minister Johnson and I had a very productive meeting,” Biden said after the leaders met at a beach resort ahead of the G-7 meeting in Cornwall, England. “We affirmed the special relationship.” Johnson praised Biden as “a breath of fresh air”, and said they had a “wonderful” conversation. Speaking to the BBC, Boris said he would describe the relationship between the UK and US as “indestructible” (preferring that to the term “special relationship”, which BoJo denounced as a cliche).

However, as Bloomberg pointed out, this happy front belies growing tensions between the two world leaders. While the body language on display was described by the press as “warm”, and the two leaders took pains to emphasize their common ground, tensions have been rising over the UK’s split from the EU, and the looming trade dispute that could see a border rise again between Northern Ireland and the UK.

The pair took pains to emphasize their common ground, despite rising tensions behind the scenes over the fallout from the U.K.’s split from the European Union.

In recent days, the Biden administration has been vocal in public and privately with the British government, raising concerns that an escalating trade dispute between the U.K. and the EU could threaten peace in Northern Ireland.

But Biden, who famously describes himself as Irish, did not directly push Johnson to fix the argument with Brussels, when they met face-to-face for the first time on Thursday, according to the U.K. side.

Asked by reporters if the president had told Johnson to “crack on” and reach a solution with the EU, the prime minister replied: “No he didn’t.”

“The prime minister wanted to raise it and be very clear on our position,” Raab said. “It is the dogmatic, purist approach that the EU has taken which is the risk to the Good Friday Agreement.”

But the notion that they will be able to avoid the issue during the summit in Cornwall seems impossible, since French President Emmanuel Macron has already complained to the press, saying that there is no way the North Ireland protocol will be renegotiated as BoJo tries to strong arm his former European partners. The jocular display from Biden and BoJo is especially surprising considering that Biden has in the past criticized BoJo as a “clone” of President Donald Trump, while also criticizing his support for Brexit. But given that they are true politicians, they put their differences aside for the sake of the camera’s. As BBG pointed out, there are still plenty of issues on which the two leaders agree. They were also able to help one another by backing each other’s G-7 proposals.

After all, BoJo wants that Amazon tax money just as bad as the next European leader.