Biden Heads To Middle East, Plans To Abase Himself Before Saudi Royals

Authored by Doug Bandow via AntiWar.com,

President Joe Biden is off to the Middle East. He apparently plans to welcome Saudi Crown Prince Mohammed bin Salman – ole “Slice ‘n Dice,” when it comes to journalistic critics – in from the cold. The president is abandoning the pretense that human rights motivate his administration.

Of course, this should come as no surprise. Campaign promises rarely last much beyond election day. Candidates collect votes from hapless citizens, only to announce after winning that their commitments are impossible to keep. So it has been with treating Mideast royal dictatorships as the criminal regimes they are.

President Donald Trump set the standard for shamelessly catering to Saudi whims. So ostentatious was his subservience that some suspected mercenary objectives, perhaps hoping to build a Trump Tower in Riyadh after leaving office or collect future investments for his son-in-law Jared Kushner. The more mundane explanation may be that the Kingdom of Saudi Arabia brilliantly played to Trump’s vanities while the Israelis convinced him that Riyadh was a necessary ally against Iran. Whatever the reason, there was no Saudi crime the Trump administration would not aid, abet, and cover-up.

Candidate Biden responded by sharply criticizing Trump and promising to make the crown prince, known as MbS, a “pariah.” President Biden began well, by refusing to meet or even call the killer prince. The governments could still cooperate, and Americans could still buy oil even if Washington stopped pretending that the KSA was a vital pillar of US Mideast policy.

However, Biden quickly fell back into the conventional wisdom of which he has been a poster boy since entering politics. One factor is Iran. Although Biden committed to restoring the Joint Comprehensive Plan of Action, or nuclear deal, with Tehran, he blundered away his chance to improve relations, proving hopelessly timid and fearful of Republican criticism.

Vicious GOP attacks were inevitable if he did anything less than launch a nuclear attack on the Islamic Republic, and even that probably would have been dismissed as insufficient by congressional Republicans. He should have accepted the inevitable and immediately entered into negotiations with Iran. Instead, he dithered and accepted the poison pill sanctions imposed by Trump to prevent his successor from making a deal.

Now seemingly stuck with Trump’s disastrous “maximum pressure” campaign – instead of causing Tehran to accept Washington’s dictates, the policy spurred the Islamic Republic to speed up its nuclear program – Biden is similarly increasing sanctions and threatening military action. Which means effectively turning Iran policy over to Israel and Saudi Arabia. Instead of attempting to extricate Washington from a sectarian feud between Shiites and Sunnis, Biden appears to be going all in for the Saudis, no matter how loathsome and irresponsible the royal regime.

Biden’s second objective is to win over Israel first fans who voted Republican during Trump’s reign. The Abrahamic Accords brought no peace, since Israel was not at war with the likes of the United Arab Emirates, Bahrain, and Morocco. Indeed, the US had to buy Arab assent – for instance, accepting Morocco’s illicit annexation of the Western Sahara. Rather, the public normalization of relations created the basis of a Sunni Arab-Israeli alliance against Tehran. Israel would like to add the Saudis, which in practice means the administration wants the same, even though the American people get little out of the bargain. At least President Barack Obama made a pretense of caring about promiscuous Israeli violations of Palestinians’ human rights.

Finally, Biden is desperate to get more oil flowing. He fears a Democratic wipeout in November with inflation raging and his approval rating plummeting. The US has spent years using sanctions to drive producers off the market, recently Iran and Venezuela and since February Russia. Playing the craven beggar, he hopes to convince the crown prince to open the spigots.

Officially, the president said he doesn’t plan to ask for the Kingdom to sell more oil, but he doesn’t have to. That message has been communicated for weeks. He also said he wasn’t going for the purpose of seeing Crown Prince Slice ‘n Dice, though they would be in meetings together. However, no one doubts that the president and MbS will do more than greet one another. The only question is whether the crown prince will insist that Biden kiss the royal feet first.

It’s not clear that the Kingdom can deliver a lot more oil – apparently MbS told French President Emmanuel Macron that the Kingdom was already at maximum production. Moreover, the KSA has no reason to give up the opportunity to fill its coffers with petroleum prices running at record levels. It is easier to take money from American and European consumers than to again turn the Riyadh Ritz-Carlton into an informal prison and shake down the Saudi mercantile class. (Not that anyone can be certain Prince Slice ‘n Dice won’t use that tactic again!)

In any case, the only reason MbS would agree to even a little moderation in oil policy is if Biden offered something more valuable in return. And that appears to be some sort of security guarantee, officially or unofficially turning American military personnel into royal bodyguards. This is an awful idea. If the Saudi people can’t be trusted to defend their nation’s brutal, rapacious ruling class – the Kingdom is ranked by Freedom House among the world’s dozen least free nations, with China, Iran, and Russia ranking above Riyadh – young Americans certainly shouldn’t be dispatched.

MbS has loosened totalitarian social controls, leading to a burst of popularity among the young. Imagine, Saudis now can attend movie theaters! However, he has tightened political controls. There is no sign that he is willing to stop kidnapping, jailing, imprisoning, murdering, and even dismembering his critics. Moreover, despite his studied appeal to credulous evangelicals, he maintains the ban on any faith but Islam. Although no one could confuse the United Arab Emirates with a liberal society, the Kingdom is in a class almost by itself.

Riyadh and its well-renumerated Greek Chorus in Washington promote the KSA as a vital ally. However, the reality is quite different. The energy market has diversified. Biden is desperate to expand Saudi oil production because the US is now waging economic war against multiple oil producers. Instead of empowering the Saudis, Biden should abandon the Trump administration’s failed strategies of starving already suffering Venezuelans and wrecking Iran’s economy. The US also should be offering Ukraine at least as much encouragement to make peace as war.

The Kingdom’s factotums also present the Saudi royals as a heroic barrier to aggressive Iranian Islamic revolutionaries. Yet the KSA has been even more disruptive and interventionist than Tehran. Riyadh financed the brutal al-Sisi coup and dictatorship in Egypt, sent troops to preserve the oppressive minority Sunni monarchy in Bahrain, blockaded and threatened to invade neighboring Qatar, underwrote Islamist fighters in Libya and Syria, kidnapped Lebanon’s prime minister, and invaded Yemen, the poorest country in the region. Quite a record!

According to reports, Macron also wants Iranian & Venezuelan oil to come back to int’l markets. It remains unclear if Biden will budge on this. pic.twitter.com/kP6QhyQFR7

The latter misadventure has proved to be an extraordinary humanitarian disaster. The situation even worsened after Biden was elected. Reported the Yemen Data Project: “January 2022 was the most violent month in the Saudi-led air war in Yemen in more than five years. Yemen Data Project recorded 139 civilian deaths and 287 civilians injured in Saudi coalition airstrikes in January, taking the casualty toll to over 19,000 civilians killed and injured since Saudi Arabia launched its bombing campaign in Yemen in March 2015. Not since October 2016 have more civilian casualties been recorded in a single month in the air war. Saudi-led coalition airstrikes caused more civilian harm in the first month of 2022 than in the two previous years combined.”

The KSA and its propagandists blame Iran, but Yemen’s Ansar Allah, or Houthis, always kept their distance from Tehran. The latter got heavily involved only after the Saudis and Emiratis, armed and supported by Washington, provided Tehran with an Allah-sent opportunity to bleed them. The royals turned another round of internal strife which has bedeviled Yemen for a half century into an international sectarian war, with catastrophic results. More than seven years later a ceasefire has finally halted fighting. However, no one knows if MbS has learned from his folly and is prepared to make a realistic peace.

Perhaps the worst aspect of Biden’s trip is the US president going as impecunious petitioner, acting as if the KSA was the superpower and America was the supplicant. This long has been Saudi Arabia’s perspective of Washington. Defense Secretary Robert Gates recognized that the Saudi royals were ever ready to “fight the Iranians to the last American.” Biden seems likely to grant the Kingdom’s wish. Once he does his ostentatious kowtow to MbS, Saudi Arabia is unlikely to be the last dubious “ally” to take this administration’s measure and treat the president with disdain. No wonder polls show that less than a quarter of Americans approve of his trip.

Instead of abasing himself, the president should transform the bilateral relationship into something approaching normalcy. First, he should encourage the ongoing dialogue between Riyadh and Tehran. The Kingdom decided to engage its potential antagonist after sensing Washington’s waning interest in treating the royals as permanent defense dependents. Better for Iran and the KSA to defuse their hostility than for Americans to make the Mideast safe for despotic Medieval monarchies. 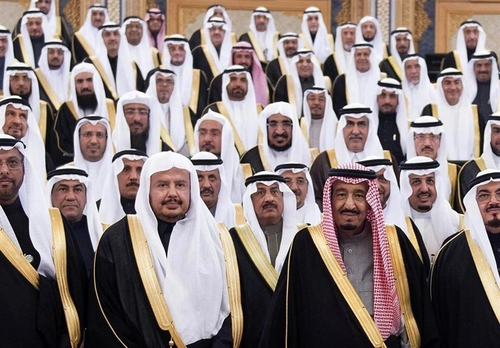 As for a security guarantee, Saudi Arabia should turn to Israel. The Mideast is perpetually unstable and shouldn’t consume so much attention and many resources from Washington. Israel is a regional superpower. Instead of expecting forever US subsidies, Jerusalem should underwrite the security of neighbors it believes to be important for its security.

Moreover, if Riyadh (and Abu Dhabi) want to make nice to China and Russia, so be it. Beijing’s economic strength ensures that it will play an important commercial role, but it is unlikely to offer much militarily. Moscow’s role will be naturally limited by its modest reach beyond the “near abroad” and the disastrous fallout from its aggression against Ukraine. With far more important issues to worry about, starting with fiscal solvency at home, the US need not dominate every region on earth forever.

If the Saudis complain, the Biden administration should publicly reconsider the federal government’s previous resistance to lawsuits against the Kingdom for alleged complicity in the 9/11 attacks. Moreover, the president could note that the Saudis and Emiratis might be appropriately declared state sponsors of terrorism, given their manifold war crimes in Yemen. And the administration could create a commission to investigate Riyadh’s influence-peddling in Washington, which exceeds anything undertaken by, say, China. Why continue to exempt the Saudis from rules applied to other nations?

Every president seems to fall for the myth that the Kingdom is a vital partner for America. It is the Saudi royals who need the US. Washington policy should reflect this geopolitical reality.