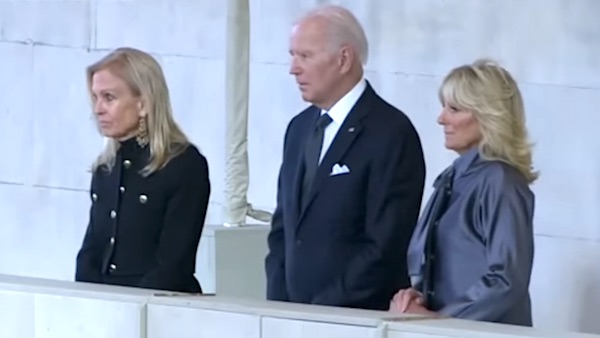 U.S. President Joe Biden paid his respects at Queen Elizabeth II’s coffin on Sunday as thousands of police, hundreds of British troops and an army of officials made final preparations for the queen’s state funeral — a spectacular display of national mourning that will also be the biggest gathering of world leaders for years.

People across Britain paused for a minute of silence at 8 p.m. in memory of the only monarch most have ever known. At Westminster Hall, where the queen is lying in state, the constant stream of mourners paused for 60 seconds as people observed the minute of reflection in deep silence.

In Windsor, where the queen will be laid to rest on Monday evening after her funeral at Westminster Abbey, rain began to fall as the crowd fell silent for the moment of reflection. Some have set up small camps and chairs outside Windsor Castle, with plans to spend the night there to reserve the best spots to view the queen’s coffin when it arrives.

12 mins ago
Is the church in America really dying?

12 mins ago
Is the church in America really dying?

52 mins ago
Wheel of Fortune’s Vanna White, 65, reveals her intense workout schedule in order to ‘fit into sample sizes’