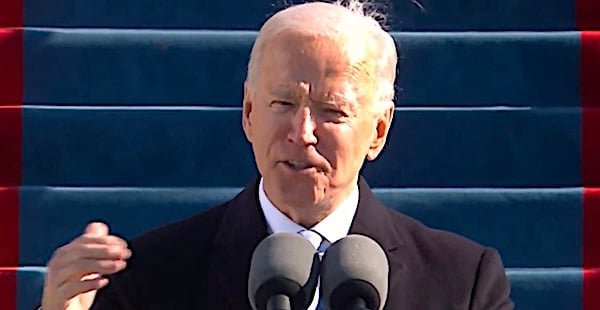 The crisis created by Joe Biden at America’s southern border, with his decision to cancel virtually all of the border-security measures installed by President Trump, is a common subject of reporting these days.

The Remain-in-Mexico plan, the border wall, and more.

The result has been dramatic – a magnet for tens of thousand, even hundreds of thousand of illegal aliens breaking into the U.S.

The results of that have included crime, a massive burden on social services, and disaster declarations by governments tasked with taking care of the illegals.

It’s gotten so bad that even one Democrat governor, in Colorado, has taken to shipping illegal aliens to other Democrat locations, drawing the ire of his fellow party members.

But that’s not all that remains of concern.

Just the News reports that federal agents have confiscated tons of narcotics and other drugs in just the past few weeks.

Those drugs can kill Americans.

Do Democrats WANT the border crisis to be solved?

The report said it was the U.S. Customs and Border Protection Air and Marine Operations agents stationed out of Jacksonville, Florida, and Corpus Christi, Texas, that took control of some 20 tons of narcotics and drugs.

That included nearly 38,000 pounds of cocaine, worth tens of millions of dollars.

It was roughly the equivalent of a full school bus.

For the year, the feds seized nearly 1,500 pounds of fentanyl, thousands of weapons, and 250,000 pounds of cocaine.

Further, a report from the Center Square detailed how U.S. Border Patrol agents arrested a record 38 people on the FBI’s Terrorist Screening Database during the first three months of fiscal 2023.

“By comparison, 14 were apprehended from fiscal years 2017-2020 under the Trump administration,” the report said.

According to Tom Homan, former acting director of Immigration and Customs Enforcement, “Since [President Joe] Biden has taken office we are at approximately 140 KST [known or suspected terrorists] trying to enter the country illegally. Border Patrol has arrested people from 161 different countries [some of which] are sponsors of terrorism.”

He continued, “With 1.2 million KNOWN got aways plus an untold number of unknown got aways; how many KST have successfully entered this country through the southwest border?”

He explained, “To say none would be clear ignorance. A lot of systems were put into place after 9-11 to prevent terrorists from getting a visa or a plane ticket to enter the US. This has successfully stopped thousands with derogatory information from entering this country. Why would a terrorist attempt to get a plane ticket or visa knowing he will be vetted? It is much easier to pay the cartels a little extra and simply cross the southwest border like the 1.2 million and escape apprehension because Border Patrol agents are so overwhelmed with this manmade Biden border crisis.”

As for the increased crime, the Daily Mail profiled one case that likely should stun Americans.

It was when four “migrants” who were bused to New York City from Texas were arrested for “shoplifting” more than $12,000 in products from a Macy’s store.

The four were captured when police were looking for a vehicle seen driving away from the scene, a BMW with fake plates. The driver was committing a variety of traffic violations, drawing officers’ attention.