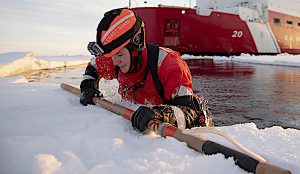 ARCTIC OCEAN – U.S. Coast Guard Petty Officer 3rd Class Shannon Eubanks pulls herself out from the Arctic Ocean during ice rescue training Wednesday, Oct. 3, 2018, about 715 miles north of Barrow, Alaska. Eubanks is a crew member aboard the Coast Guard Cutter Healy (WAGB-20) and serves on the ice rescue team to protect crew members and scientists conducting work in the Arctic. The Healy is underway in the Arctic with about 100 crew members and 30 scientists to deploy sensors and semi-autonomous submarines to study stratified ocean dynamics and how environmental factors affect the water below the ice surface for the Office of Naval Research. The Healy, which is homeported in Seattle, is one of two ice breakers in U.S. service and is the only military ship dedicated to conducting research in the Arctic. (NyxoLyno Cangemi/U.S. Coast Guard)