Speaking on Friday during the Munich Security Conference, Bill Gates, Microsoft’s founder and chairman, discussed how the threat posed by the COVID pandemic had “dramatically lowered”…while making a startling admission: that natural infection and spread was more effective at bolstering human immunity than vaccines. 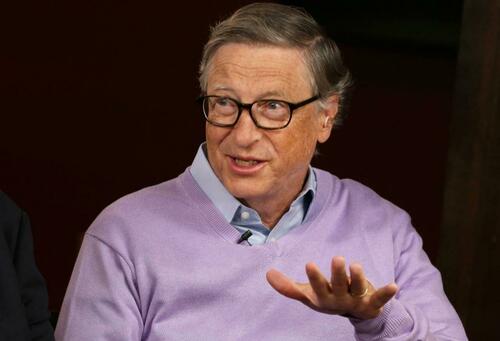 Speaking to CNBC’s Hadley Gamble during the annual conference in Germany, Gates, the co-chair of the Bill & Melinda Gates Foundation, told the audience that a potential new pandemic would likely stem from a different pathogen than that belonging to the coronavirus family (maybe Ebola, perhaps?).

But he added that advances in medical technology should help the world do a better job of fighting it – if investments are made now.

“We’ll have another pandemic. It will be a different pathogen next time,” Gates said.

Two years into the coronavirus pandemic, Gates said the worst effects have faded as huge swathes of the global population have gained some level of immunity.

Its severity has also waned with the latest omicron variant.

Amazingly, after years of denial, Gates seemed to acknowledge – albeit in a roundabout way – that the infectiousness of the omicron variant had played the key role in boosting human immunity to SARS-CoV-2.

According to Gates, it’s already “too late” to reach the WHO’s  goal to vaccinate 70% of the global population by mid-2022. Currently 61.9% of the world population has received at least one dose of a COVID vaccine) but that’s okay, however, Gates said, as in many places, the virus itself, which creates a level of immunity, and has “done a better job of getting out to the world population than we have with vaccines.”

“The chance of severe disease, which is mainly associated with being elderly and having obesity or diabetes, those risks are now dramatically reduced because of that infection exposure,” he said.

Finally, Gates insisted that the cost of being “prepared” for the next pandemic wouldn’t be that difficult. For instance, Gates said, having a mutable mRNA vaccine platform is one way vaccine-makers might be able to prepare themselves.

“The cost of being ready for the next pandemic is not that large. It’s not like climate change. If we’re rational, yes, the next time we’ll catch it early.”

He added that the world should move faster in the future to develop and distribute vaccines, calling on governments to invest now.

“Next time we should try and make it, instead of two years, we should make it more like six months,” Gates said, adding that standardized platforms, including messenger RNA (mRNA) technology, would make that possible.

Despite becoming an object of public scorn during the pandemic, Gates and his foundation are undeterred: the billionaire is already plowing millions of dollars into a foundation helping to prepare for ‘the next’ pandemic.

Gates, through the Bill & Melinda Gates Foundation, has partnered with the U.K.’s Wellcome Trust to donate $300 million to the Coalition for Epidemic Preparedness Innovations, which helped form the Covax program to deliver vaccines to low- and middle-income countries.

The CEPI is aiming to raise $3.5 billion in an effort cut the time required to develop a new vaccine to just 100 days.

The whole operation is amusing since nobody knows what the next pandemic will be.