Thomas Barrack, the 74-year-old billionaire founder of private equity form Colony Capital – who served as chairman of the 2017 inaugural fund for then-President Donald Trump – was arrested on federal charges in Los Angeles on Tuesday morning.

He is accused of acting and conspiring to act as an agent of the UAE between April 2016 and April 2018, Justice Dept says in statement. 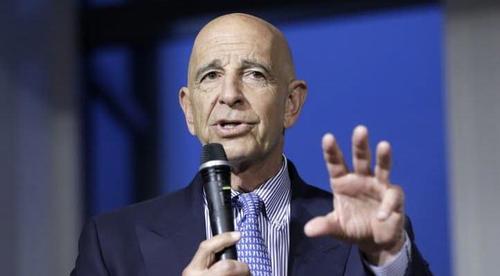 The Indictment also charges Barrack with obstruction of justice and making multiple false statements during a June 20, 2019, interview with federal law enforcement agents.

Barrack and other defendants “repeatedly capitalized on Barrack’s friendships and access to a candidate who was eventually elected President, high-ranking campaign and government officials, and the American media to advance the policy goals of a foreign government without disclosing their true allegiances,” said Acting Assistant Attorney General Mark Lesko.

Read The DoJ’s full release below…

Defendants Allegedly Acted and Conspired to Act at the Direction of Senior United Arab Emirates Officials to Influence a Presidential Campaign, Public Opinion and the U.S. Government

A seven-count indictment was unsealed today in a New York federal court relating to the defendants’ unlawful efforts to advance the interests of the United Arab Emirates (UAE) in the United States at the direction of senior UAE officials by influencing the foreign policy positions of the campaign of a candidate in the 2016 U.S. presidential election and, subsequently, the foreign policy positions of the U.S. government in the incoming administration, as well as seeking to influence public opinion in favor of UAE interests.

Thomas Joseph Barrack, 74, of Santa Monica, California; Matthew Grimes, 27, of Aspen, Colorado; and Rashid Sultan Rashid Al Malik Alshahhi, aka Rashid Al Malik and Rashid Al‑Malik, 43, a UAE national, are accused of acting and conspiring to act as agents of the UAE between April 2016 and April 2018. The indictment also charges Barrack with obstruction of justice and making multiple false statements during a June 20, 2019, interview with federal law enforcement agents.

“The defendants repeatedly capitalized on Barrack’s friendships and access to a candidate who was eventually elected President, high-ranking campaign and government officials, and the American media to advance the policy goals of a foreign government without disclosing their true allegiances,” said Acting Assistant Attorney General Mark Lesko of the Justice Department’s National Security Division. “The conduct alleged in the indictment is nothing short of a betrayal of those officials in the United States, including the former President. Through this indictment, we are putting everyone — regardless of their wealth or perceived political power — on notice that the Department of Justice will enforce the prohibition of this sort of undisclosed foreign influence.”

“As alleged, the defendants, using their positions of power and influence in a presidential election year, engaged in a conspiracy to illegally advance and promote the interests of the United Arab Emirates in this country, in flagrant violation of their obligation to notify the Attorney General of their activities and in derogation of the American people’s right to know when a foreign government seeks to influence the policies of our government and our public opinion,” said Acting U.S. Attorney Jacquelin M. Kasulis for the Eastern District of New York. “These arrests serve as a warning to those who act at the direction of foreign governments without disclosing their actions, as well as those who seek to mislead investigators about their actions, that they will be brought to justice and face the consequences.”

“Today’s indictment confirms the FBI’s unwavering commitment to rooting out those individuals who think they can manipulate the system to the detriment of the United States and the American people,” said Assistant Director Calvin Shivers of the FBI’s Criminal Investigative Division. “Barrack is alleged to have abused his access to government officials to illegally advance the interests of foreign governments. The FBI stands in concert with our external partners to ensure all who seek to wield illegal influence are charged for their crimes.”

“American citizens have a right to know when foreign governments, or their agents, are attempting to exert influence on our government,” said Assistant Director in Charge William F. Sweeney Jr. of the FBI’s Field Office. “This is especially important to Americans during a presidential election year, and the laws on the books were created to protect our nation from such untoward influence. This case is about secret attempts to influence our highest officials, and when that corrupt behavior was discovered, we allege Mr. Barrack went even further, obstructing and lying to FBI special agents. In case it needs repeating, each of those bad choices is a federal felony, and each now comes with significant consequences – the first being today’s indictment.”

According to court documents, between April and November 2016, Barrack served as an informal advisor to the campaign of the candidate in the 2016 U.S. presidential election. Between November 2016 and January 2017, Barrack served as Chairman of the Presidential Inaugural Committee. Beginning in January 2017, Barrack informally advised senior U.S. government officials on issues related to U.S. foreign policy in the Middle East. Barrack also sought appointment to a senior role in the U.S. government, including the role of Special Envoy to the Middle East. Barrack served as the Executive Chairman of a global investment management firm headquartered in Los Angeles, and Grimes was employed at the firm and reported directly to Barrack. During the relevant time period, Alshahhi worked as an agent of the UAE and was in frequent contact with Barrack and Grimes, including numerous in-person meetings in the United States and the UAE.

As alleged in the indictment, the defendants used Barrack’s status as a senior outside advisor to the campaign and, subsequently, to senior U.S. government officials, to advance the interests of and provide intelligence to the UAE while simultaneously failing to notify the Attorney General that their actions were taken at the direction of senior UAE officials. Barrack – directly and through Alshahhi and Grimes – was regularly and repeatedly in contact with the senior leadership of the UAE government. On multiple occasions, Barrack referred to Alshahhi as the UAE’s “secret weapon” to advance its foreign policy agenda in the United States.

Barrack, Alshahhi and Grimes allegedly took numerous steps in the United States to advance the interests of the UAE. For example, in May 2016, Barrack inserted language praising the UAE into a campaign speech to be delivered by the candidate about U.S. energy policy in May 2016 and emailed an advance draft of the speech to Alshahhi for delivery to senior UAE officials. Similarly, throughout 2016 and 2017, the defendants sought and received direction and feedback, including talking points, from senior UAE officials in connection with national press appearances Barrack used to promote the interests of the UAE. After one appearance in which Barrack repeatedly praised the UAE, Barrack emailed Alshahhi, “I nailed it. . . for the home team,” referring to the UAE. Barrack and Grimes also solicited direction from senior UAE officials in advance of the publication of an op-ed authored by Barrack and published in a national magazine in October 2016 and removed certain language at the direction of senior UAE officials, as relayed by Alshahhi.

Following the 2016 U.S. presidential election, the defendants repeatedly acted at the direction of UAE officials to influence the foreign policy positions of the incoming administration in favor of UAE interests. For example, in December 2016, Barrack attended a meeting with Grimes, Alshahhi and senior UAE government officials, during which he advised them to create a “wish list” of U.S. foreign policy items that the UAE wanted accomplished in the first 100 days, six months, year and four years of the incoming administration of the U.S. President-elect.

In March 2017, Barrack and his co-defendants agreed to promote the candidacy of an individual favored by senior UAE officials for the position of U.S. Ambassador to the UAE. In May 2017, Barrack agreed to provide Alshahhi with non-public information about the views and reactions of senior U.S. government officials following a White House meeting between senior U.S. officials and senior UAE officials.

In September 2017, Alshahhi communicated with Barrack about the opposition of the UAE to a proposed summit at Camp David to address an ongoing dispute between the State of Qatar, the UAE and other Middle Eastern governments, after which Barrack sought to advise the President of the United States against holding the Camp David summit. The summit never happened.

In furtherance of the alleged criminal conspiracy and conduct, Barrack and Grimes, with the assistance of Alshahhi, acquired a dedicated cellular telephone and installed a secure messaging application to facilitate Barrack’s communications with senior UAE officials.

Neither Alshahhi nor Barrack nor Grimes provided the required notification to the U.S. Attorney General that they were acting in the United States as agents of a foreign government.

On June 20, 2019, Barrack voluntarily met with FBI special agents. During the interview, Barrack allegedly made numerous false statements, including falsely denying that Alshahhi had ever requested that he take any actions on behalf of the UAE.

Barrack and Grimes were arrested this morning and are scheduled to be arraigned this afternoon in the Central District of California. Alshahhi remains at large.

The charges in the indictment are allegations, and the defendants are presumed innocent unless and until proven guilty.

After arresting Trump Org’s CFO on de minimus charges, one wonders if this arrest is yet another attempt to pressure someone on the inside of Trump’s circle to spill some of the apparently absent beans that multiple probes, investigations, and witch hunts have failed to find.

…and yet Hunter Biden is cool, right?