Bitcoin Tumbles Below $30,000 For First Time Since January

As the flow of headlines proclaiming “China cracking down on crypto” for the n’th time continue to flow, uncertainty has sparked more selling.

Bitcoin has dropped below $30,000 for the first time since January 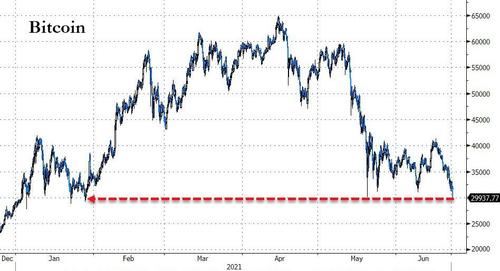 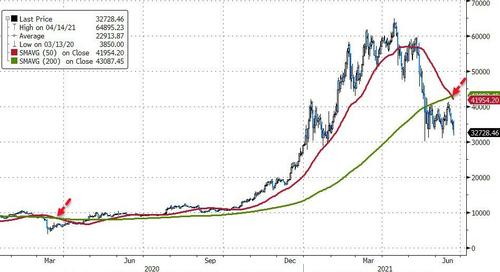 Ethereum is also ugly this morning, breaking below $2000… 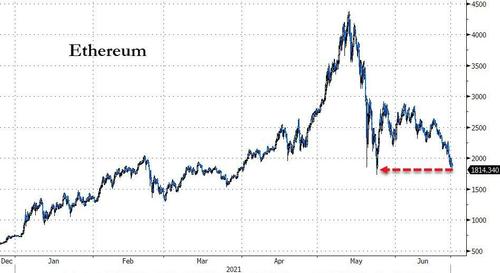 Overall, as CoinTelegraph explains, nothing has fundamentally changed in the Chinese government’s position on Bitcoin since its controversial trading ban came into force in September 2017.

“Half the Bitcoin network has now been shut down by China. Bitcoin hash rate at levels of mid-2020,” Charles Edwards, CEO of asset manager Capriole, noted in a series of tweets on the mining crackdown that formed the previous source of Chinese price pressure.

Others argued that Bitcoin has gained new opportunities thanks to the punitive measures from both banks and government — mining will shift elsewhere, and the network will flourish as a result of making use of friendlier, more reliable jurisdictions.

“The ‘China-dominated’ Bitcoin mining era may be coming to an end.” Alex Gladstein, chief strategy officer of the Human Rights Foundation, commented on a farewell message from one miner in the province of Sichuan.

“It will be a source of rich irony for future historians to teach that the world’s free, open, and decentralized monetary network was secured in its early years by individuals inside a repressive dictatorship.”

And some context for this drop…

So bearish today even though we are still hovering around the same range (~35k) totally in line with previous bull markets!
🧵👇#Bitcoin pic.twitter.com/4Ivn3oVUhJ

Others, such a stock-to-flow model creator PlanB, are even bullish on practically every timeframe beyond the daily chart.

As Cointelegraph reported, his “worst case scenario” is now $135,000 for BTC/USD by the end of this year.