Bitcoin’s Line In The Sand: Where Whales Are Buying

One thing that distinguishes Bitcoin from traditional financial instruments is its open immutable ledger. Anyone can see anything that is going on on-chain and nobody can temper with the data.

That means, in principle, on-chain data should be a gold mine of interesting financial data. In practice though it is not always straightforward to know where to look and to understand what the data is actually telling us.

So today let’s start with some baby steps by looking at on-chain trends relating to the recent price action.

Let’s start with a summary of where we are.

In the beginning there was the Halving. And with the Halving came growth. A lot of growth: 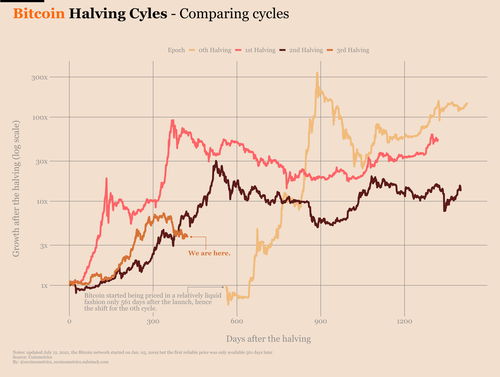 Now we are about a quarter of days into this cycle and people are seriously wondering about diminishing returns. That’s an honest question.

It makes sense that as the Bitcoin market is getting larger any additional return is getting harder and harder to obtain.

Before the big drawdown that has seen BTC move from $64k all the way down to $30k, everyone was happy that there were no signs of diminishing returns.

Now that we are below the previous growth trajectory a lot of people think it is proven we are getting diminishing returns.

But the truth is that we don’t know.

Let’s try to be a bit more precise. Maybe we can breakdown the diminishing returns hypothesis in two levels:

Now if we discard the original cycle (which makes sense given that Bitcoin was not priced in a liquid way for a big chunk of it) the strong diminishing returns hypothesis was true for the previous two cycles. The growth trajectory of the 2nd cycle is strictly below the 1st one.

But since we have spent the first part of this cycle above the 2017 trajectory this hypothesis is now false.

It is still possible we’ll see a lower peak this time around. But we have only been through the first quarter of this cycle so only time will tell if the standard diminishing return hypothesis is correct.

My opinion is that we haven’t seen the peak of this cycle yet.

But my individual opinion doesn’t have much impact on the actual value of Bitcoin. What does have an impact is how the market thinks in aggregate. And we might be able to use on-chain data to do some guesswork on that.

First thing we can do is group the addresses by the amount of coins they control. For today’s analysis I’ve made 7 groups:

Those last two groups that contain addresses controlling more than 10k BTC are a bit harder to analyze. They are probably mixing mega whales addresses with exchange addresses. So understanding behaviours related to those groups will require more work.

Right now let’s focus on the scale going from small fish to whales.

The closer you are to a small fish:

The closer you are to a whale:

Individually small fish don’t have much power over the market. They need to act as a group in order to have any significant impact on the price.

By contrast any whale can release a large amount of selling pressure thus causing a significant impact on the price.

Keeping that in mind, one metric that can be tracked on-chain is how much coins those groups of addresses control in aggregate and specifically how it changes over time.

That is we can answer questions of the type: in aggregate are whales/small fish/etc accumulating or offloading coins?

So let’s do that.

The post-halving bull market really began around October last year when BTC started to take off from the $10k zone.

There is a striking difference between how the small fish behaved over this period when compared to the whales.

For each group of addresses we plot the change in coins held in aggregate over time, points trending higher means accumulation, points trending lower means offloading. Each point is coloured by the value of Bitcoin in US$ that day, the darker the colour the higher the price. 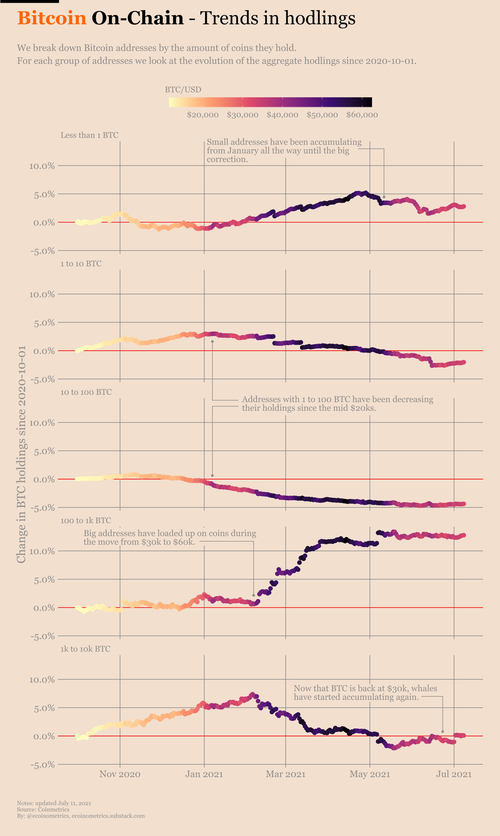 The short story is that:

But now that we are back to $30k whales have started accumulating again… see for yourself. 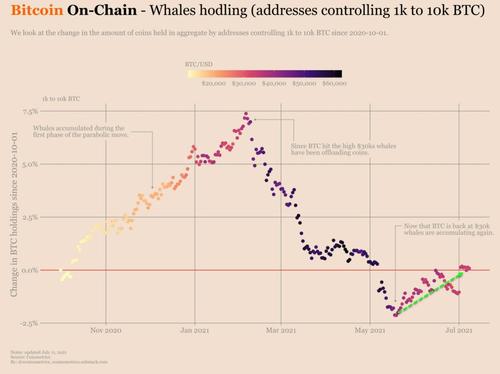 Apparently, for people who are in the know, $30k was a key level that stopped the trend in coins accumulation.

When you look at the price action around this time you can see that we were growing very fast. Much faster than the previous cycle. Actually so fast that the growth trajectory started to catch up with the log average trajectory… 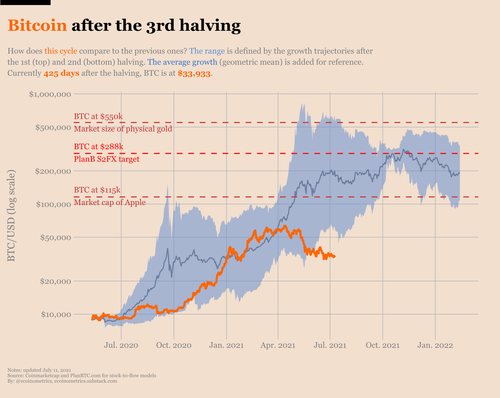 So it is possible that some whales felt it was too much too fast and that triggered some selling pressure which led to the topping process at $64k.

When FUD was added to the situation the small fish also stopped accumulating resulting in the -55% correction we are in right now.

Since BTC stabilized around $30k things have changed though. Whales and small fish have started accumulating again while other categories have turned neutral. 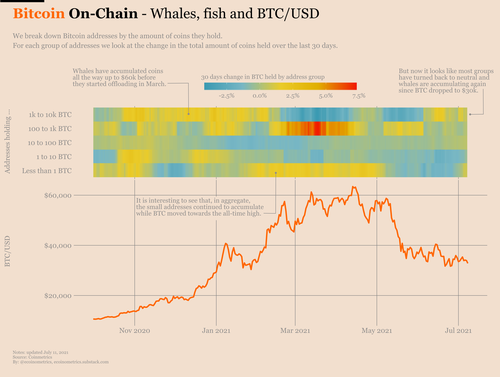 If that interpretation is correct, then what we had with this correction is a reset. Would that trend continue there is only one direction Bitcoin can go and that’s up.

So let’s keep our eyes open for on-chain trends.

Best thing to do in the meantime is do like everyone else, accumulate to build a position and be ready when the trend restarts.

The Ecoinometrics newsletter decrypts Bitcoin’s place in the global financial system. If you want to get an edge in understanding the future of finance you only have to do one thing, click here to subscribe.