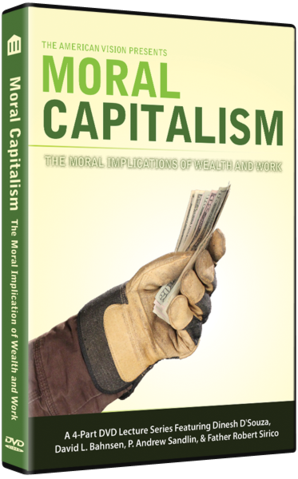 These “social conscience” sports stars have misdirected their financial and moral capital. Everyone knows that black-on-black crime is much more pervasive than white policemen killing black people, and that’s not something to be dismissed or made light of. Little or nothing is said or done about the daily murder rate among blacks in a city like Chicago. Every weekend we hear of multiple shootings and murders. The current mayor of Chicago is blaming guns coming from other states. Guns are inanimate objects. It takes someone to load and fire a gun.

The majority of NBA players are black. They’ve gotten rich from young black men who purchase their high-priced sports shoes, hats, jerseys, and so much more. If they really had a social conscience they would stop living behind gates and move to the cities that could use their investment capital to build businesses and schools so young men and women could learn job skills to prepare them for good paying jobs.

Moral Capitalism makes the case for a virtuous system of free market principles that takes both the economic and moral high ground, for without a firm foundation of biblical morality, either centralized economic planning will impoverish a nation, or the ravenous greed of selfish men will poison the hearts of its people.

Not playing basketball and kneeling won’t do anything to help young people. They are empty gestures that have little or any impact on black lives. Black-on-black crime will continue whether they play or not play. Young black men will continue to fall through the cracks because of ill-conceived government programs. I would love to see these highly regarded sports stars convince mostly young men (although young women are also guilty) how to respond when confronted by police. Leo Terrell said the following: “Why does it always have to get to a point where we see — ‘over and over and over’ — these guys ignoring commands, attempting to fight or otherwise threaten police officers, pointing tasers or guns of their own at officers, and exacerbating interactions with law enforcement?”

The point is, don’t give a police officer a reason to do harm. None of this negates the wrongdoing of police officers who operate outside the law.

Neither I nor Leo Terrell is suggesting that overzealous — or worse — cops don’t sometimes commit crimes against minorities. I’m also not suggesting that Jacob Blake deserved to be shot.

What I am saying is the facts in many if not all of these cases are ignored by those who rush to judgment over a police action — exactly as LeBron James did in the case of Jacob Blake.

We don’t know all of the facts and, most importantly, none of us were there. James couldn’t see inside the car, he didn’t see what Blake could have been reaching for. Moreover, he doesn’t even know what Blake might have been saying or threatening to do.

It is clear he was not complying with the officer’s commands imploring him to comply. The belligerence of Blake is appalling especially since there were kids in the car. Blake wasn’t supposed to be there in the first place as his ex-girlfriend called the police because he was in violation of a restraining order.

Instead of kneeling and boycotting basketball games, step up your game and go the court of life and help young black men and women. Invest your time, gifts, and money in their lives. No government program is going to fix what’s wrong.