Today in “signs the market could be bottoming news”, yet another well known trader is “shifting their strategy” as a result of the recent global selloff in markets. It was reported this week that BlackRock’s Alister Hibbert has officially turned bearish.

Hibbert’s BlackRock Strategic Equity Hedge Fund has been down about 13% this year through April, exceeding its worst ever decline of 11%, Bloomberg wrote. Hibbert’s fund has performed well, riding the wave of rising stocks since 2011, the report says.

At the end of last year, the fund was net long about 35%, the report says. The fund has about $9 billion in assets after Hibbert started it more than 10 years ago with just $13 million under management. 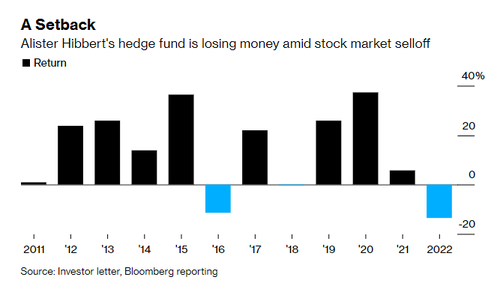 Hibbert has a preference for growth and has owned names like Microsoft and Mastercard, the report says. He had already told clients at the beginning of this year that “the strongest phase of economic recovery” was over.

“It is clear that the normalization of the economy post-pandemic is not going to be an entirely orderly process,” Hibbert reiterated to investors in a letter.

Hibbert has been one of the best paid managers in the world, Bloomberg notes, racking up a nine-figure pay day in 2020. He has been generating annualized returns of almost 17% until last year, the report also noted – but now he is just one of the many in the long line of “active managers” who are starting to realize the game isn’t quite as simple when the Fed isn’t a rising tide lifting all boats.