Republican members of the U.S. House of Representatives, in a letter organized by Rep. Lauren Boebert, R-Colo., are demanding that Attorney General Merrick Garland explain why rioters who attacked federal facilities during the Black Lives Matter uprisings that inflicted hundreds of millions of dollars of damage across the U.S. in 2020 are being handled differently from those who invaded the U.S. Capitol on Jan. 6.

She explained in a website statement, “The Department of Justice is using aggressive tactics to prosecute the January 6th riot, but it has not done the same for the BLM riots during the spring and summer of 2020 where one federal officer was killed and over 700 federal and local officers were injured.

In the letter to Garland, which was joined by Reps. Andy Biggs, Andrew Clyde, Jeff Duncan, Bob Good, Marjorie Taylor Greene, Louie Gohmert, Jody Hice, Thomas Massie, Ralph Norman and W. Gregory Steube, Boebert wrote, “Our colleagues in the Senate wrote to you June 7, 2021, expressing concerns about the potential unequal administration of justice with respect to instances of mass unrest, property destruction, and loss of life across our country. To our knowledge, no response has been provided, and we write raising the same concerns and questions and respectfully request you provide a response by July 30, 2021.”

The letter continued, “The DOJ reported that during the unrest of the spring and summer of 2020, 1 federal officer was killed and over 700 federal and local officers were injured during the protests. Furthermore, the Bureau of Alcohol, Tobacco, Firearms and Explosives (ATF) reported, ‘since the start of the unrest there has been 81 Federal Firearms License burglaries of an estimated loss of 1,116 firearms; 876 reported arsons; 76 explosive incidents; and 46ATF arrests[.]’

“Yet, reports indicate that prosecutors have approved at least half a dozen deferred resolution agreements in federal felony cases arising from clashes between protesters and law enforcement in Oregon last summer. These deferred resolution agreements leave defendants with a clean criminal record if they stay out of trouble and complete a modest amount of community service.

The letter added, “DOJ’s apparent unwillingness to punish individuals who committed crimes during the spring and summer 2020 protests stands in stark contrast to the treatment of the individuals charged in connection with the breach of the U.S. Capitol Building in Washington, D.C. Whether it is a mob breaking laws in D.C. or a mob in Portland or Minneapolis, the standard of justice should be the same in America.”

The letter then includes a list of questions that specifically focus on the handling of rioters whether they were in Portland, Oregon, or Washington, D.C.

Boebert charged, “The foundation of our criminal justice system requires that all defendants are treated equally before the law, but the Biden regime is not living up to this solemn obligation. Reports are circulating that the Biden regime has held January 6th rioters in solitary confinement, while at the same time, they are letting BLM rioters that attacked federal buildings off with just a few hours of community service. This is not an equal standard of justice. I condemn all forms of political violence, and all political violence must be prosecuted fairly.”

The Washington Times reported it was Sen. Ted Cruz of Texas who led several other senators last month in seeking similar information.

The report explained one federal officer, David Patrick Underwood, was killed during the BLM riots that swept across the nation and hit more than 100 cities.

“Five people died in the Jan. 6 riots, but none at the hands of rioters. Ashli Babbitt was shot and killed by Capitol Police; three protesters died of accidental or natural causes; and Capitol Police Officer Brian Sicknick suffered two strokes and died the next day,” the report said.

The Daily Mail confirmed “dozens” of those suspected of January 6 offenses “are being held in the Washington, D.C., jail awaiting their trial.” Lawyers representing the defendants say their cells are the “size of a walk-in closet” and they are being treated like “domestic terrorists.”

But although nearly 10,000 were arrested for the violent BLM riots, after suspects there vandalized dozens of federal buildings and many law enforcement agents were injured, many of those charges simply were dropped. 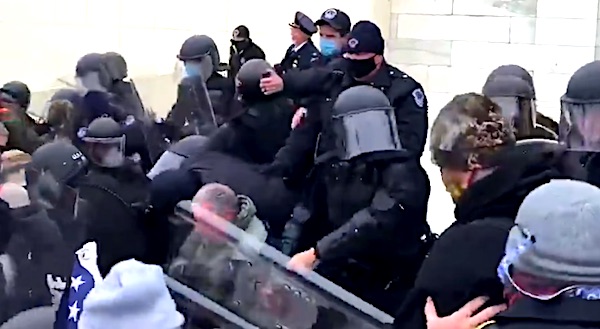