This morning’s closely watched decision by the Bank of England saw the central bank keep rates unchanged at 0.1% in a unanimous vote as expected, and also held QE unchanged at GBP895BN in 7-1 vote with hawk Saunders dissenting, arguing in favor of a reduction in the stock target to 830 billion pounds (Ramsden did not join the hawkish opposition as some had expected).

The Monetary Policy Committee voted unanimously to keep interest rates at 0.1% and by a majority of 7-1 to maintain the amount of quantitative easing at £895bn. https://t.co/gZfLBg8Gqh #MonetaryPolicyReport #BankRate pic.twitter.com/IEjOh9YHsh

The most notable development is the BOE’s tapering sequencing disclosure with the BOE saying it is ready to begin unwinding QE when the benchmark rate hits 0.5%, which is a lot earlier than the previous assumption of 1.5%. And while the unwind would start by halting reinvestment of expired bonds held by the BOE, the bank said that active sales won’t start til rates hit 1%.

Also in a surprise revision to its inflation forecast, the BOE now sees inflation surging to 4% by Q4 before easing back close to target. But the highlight of the minutes was the BOE’s admission that some tightening will be needed over the forecast horizon, which according to Bloomberg is “a real signal it’s looking down the road away from pandemic-era crisis settings.” The section in question:

“The Committee judges that, should the economy evolve broadly in line with the central projections in the August Monetary Policy Report, some modest tightening of monetary policy over the forecast period is likely to be necessary to be consistent with meeting the inflation target sustainably in the medium term.”

And just in case things turn out worse than expected, the BOE also said it has more ammunition for future crises, declaring that the U.K. is ready for negative rates if required, to wit:

the Committee had been briefed that technical preparations internally and by PRA-regulated firms had progressed sufficiently that a negative Bank Rate could be implemented by the system as a whole, with or without tiered reserve account remuneration, if warranted.

Some further highlights from the statement:

While the impact of Covid on activity is projected to continue to wane, the MPC’s central case forecasts include a judgement that Covid effects weigh on UK activity a little in the near term (prev. activity recovers to pre‑Covid levels in late 2021 as the vaccination programme results in the easing of restrictions and fading uncertainty)

Inflation expectations are judged to remain well anchored and the MPC will continue to monitor indicators closely (prev. risks around CPI inflation are judged to be broadly balanced)

Commenting on the market reaction, Newsquawk observes choppy trade in Gilts and Short Sterling in wake of the BoE vote split on QE, as the 10 year benchmark hit a marginal new session high at 130.50 in relief that MPC member Ramsden refrained from joining hawkish APF dissent lodged by Saunders, but then a sharp pullback to fresh intraday lows sub-130.00 when the bar for tapering was lowered significantly to 0.5%.  Front-end yields are leading the increase seen across the curve. The BOE’s statement that “some modest tightening” may be needed is well aligned with the market’s own pricing, where the terminal rate is around just 55 basis points. Like the BOE’s own adjective, it looks like the move in rates will be modest.

⚠️ BoE to reduce balance sheet when Bank Rate at 0.5%. Markets pricing this sequencing already. Most expected BoE to be hawkish today but consensus is that it’s tough to be short gilts or long $GBP right now. UK should be ‘first in, first out’ if reflation sentiment comes back pic.twitter.com/0N5kdaczUn

Meanwhile, cable slipped initially from around 50 and 100 DMA levels towards 1.3900 before bouncing firmly, but topped out ahead of 1.3950 on reflection and the minutes retaining a transitory view of inflation. In sum, not material shift in the policy stance or leaning and a dovish new member set to join. 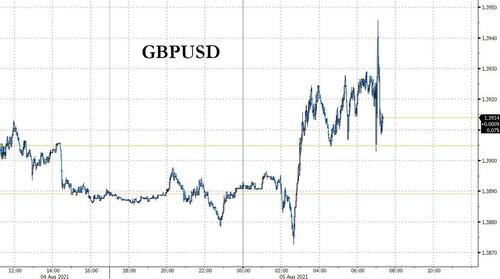