Boeing reported an unexpected loss to end 2022 as the planemaker grappled continued to grapple with high costs that threaten to slow further its already moribund recovery. The aerospace giant reported an adjusted EPS loss of $1.75 in the fourth quarter, missing estimates of a 26c profit on revenue of just under $20 billion, roughly in line (but below) the average estimate compiled by Bloomberg.

Here are the Q4 details: 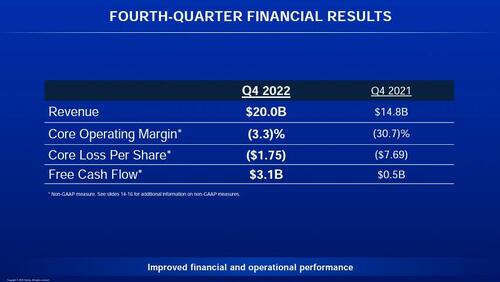 “While we have made meaningful progress, challenges remain and we have more work ahead to drive stability in our operations and within the supply chain,” Boeing Chief Executive Officer Dave Calhoun said in a separate memo to employees. “This will be another important year for us as we look to steadily increase our production rates, further improve performance, progress in our development programs and deliver on our commitments.”

The disappointing Q4 results underscore the work Boeing still has to do to return its factories to full gear and fully capitalize on soaring demand for air travel. The US aviation titan has already endured a difficult few years marked by the grounding of the cash-cow 737 Max and Covid-19 pandemic, before recent signs of recovery.

On the other hand, Boeing made good on a cash-flow recovery promised by executives, generating $3.1 billion in the quarter thanks to a late-year flurry of jet deliveries. That was better than the $2.89 billion Wall Street had expected for the period, and lifted the company to its first positive cash flow on an annual basis since 2018. Boeing had burned through more than $28 billion over the three-year stretch before the 2022 rebound. 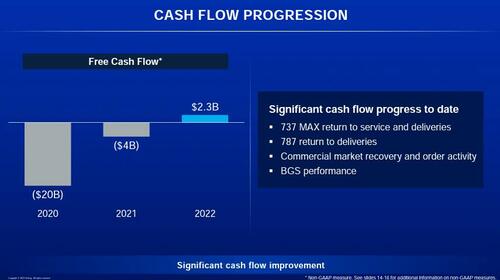 The free cash flow in 2022 was a welcome change, and while total debt was unchanged around $57BN, net debt declined thanks to a nearly $3 billion increase in cash and marketable securities to $17.2BN. 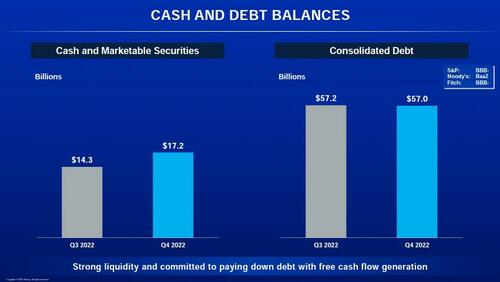 The planemaker said that it was starting to step up jet deliveries and chip away at its growing stockpile of hundreds of already-built Max, 787 Dreamliners and 777X jetliners. Boeing has been hobbled by shortages of critical components such as engines and too few trained workers on its production lines.

Increasing deliveries bolsters cash, although Boeing also faces the added expense of bringing the aircraft out of storage and making repairs so they meet the latest airworthiness standards, according to George Ferguson, an analyst with Bloomberg Intelligence. He estimated that the company had 229 undelivered Max in its storage lots as of December.

“When you start delivering airplanes that have already been built, obviously it turbocharges cash flow because you didn’t have to spend cash to build the airplane,” Ferguson said of Boeing’s cash surge in an interview before the earnings report. “But you have to spend some to get it out of inventory – before you can grab all that cash.”

As Bloomberg adds, airlines have been snapping up new jets as they emerge from Covid, and Boeing’s 737 Max has an opportunity to make headway against a rival Airbus SE model that’s largely sold out until 2029. But the US planemaker has been slow to crank up work in its factories as it contends with shortages of engines, particularly for its 737 Max, and supplier hiccups for everything from computer chips to lavatories.

Some more comments and context from the Q4 results, courtesy of Bloomberg:

Looking ahead, Boeing kept its financial objective unchanged, centered around a goal of $10BN in free cash flow in 2025/26. 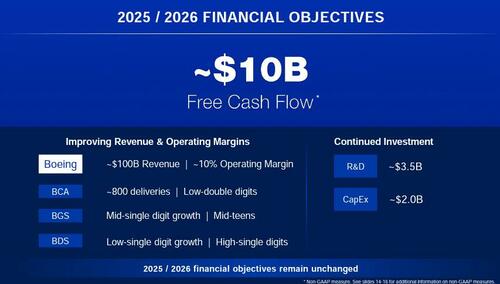 There is more in the company’s Q4 presentation and press release.

The shares fell more than 3% as of 8:30 a.m. before the start of regular trading (when the NYSE may or may not have another freak out). The stock traded at $206, roughly where it traded a year ago. Through Tuesday’s close, Boeing’s stock had risen 11% this year. 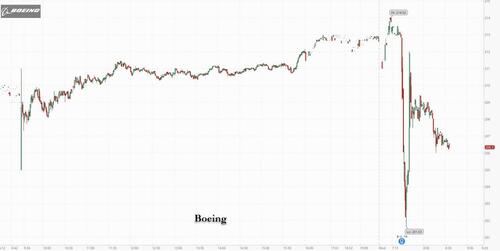 Calhoun and CFO Brian West are expected to provide an update on the status of the undelivered jets, efforts to stem defense program losses and discuss another potential earnings catalyst — China’s reopening travel market — during an earnings conference call later Wednesday morning. The bulls will be hoping that Boeing won’t pull another Microsoft then.