If we don’t return to normal now, when can we? 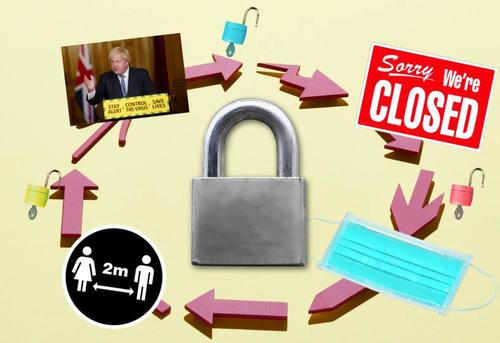 Boris Johnson was advised to “tone down the rhetoric” about Freedom Day. He ended up doing more than that. What was once billed as an “irreversible” lifting of coronavirus restrictions has become just another day in the new normal.

Contact tracing is continuing, with hundreds of thousands ordered to self-isolate each week; public transportation networks are still insisting on masks as a condition of carriage; a Covid status certification scheme is being rolled out across the country; nightly BBC bulletins still warn of a coming apocalypse; and travel abroad remains a logistical nightmare. As for leaving decisions about mask-wearing and social distancing to our discretion: prepare now for the finger waving.

Basic freedoms were taken from us to fight a virus whose impact the government dares not quantify. Insofar as these rights have been returned, the government is clear that they can be snatched back at any moment.

Chris Whitty, England’s Chief Medical Officer, has warned that we may have to lock down again within weeks if hospital admissions continue to rise. Professor Neil Ferguson has said we could be facing a “significant flu epidemic” in the coming months because the lockdowns so successfully suppressed it last winter that the NHS risks being overwhelmed now.

To break out of this doom loop, we need to reacquire the habits of freedom. Go to the pub, the club, the restaurant, the theatre, the opera, the gallery, the cricket in the balmy outdoors. Start spending.

According to the ONS’s latest economic bulletin, the household saving ratio — the percentage of a household’s disposable income that people can afford to put away — increased to 19.1 per cent in the first quarter of this year, the second-highest on record. As there’s no longer any point in saving for a holiday abroad — the cost of the PCR tests alone will be more than the villa, and you might have to quarantine on your return — get in the car, head to the beach and drink and eat and live.

This isn’t just to give the economy a boost. Our Gross Domestic Product shrunk by 1.6 per cent in the first quarter of 2021 thanks to the third lockdown and, even though the economy grew by 0.8 per cent in May, the government had to borrow £24.3 billion to meet its spending obligations — the second highest May borrowing on record.

By the end of that month, the UK’s national debt stood at £2.19 trillion, up from £1.87 trillion in April 2020. Blue chip businesses — staples of the economy who would be thriving in normal circumstances — are on their uppers. Yet appreciation of just how dire the country’s economic outlook is if normal business life doesn’t rapidly resume is vanishingly rare.

The hospitality sector has been particularly hard hit. From January to March, spending in restaurants and hotels fell by 42.2 per cent and the impact of that isn’t hard to see on the high street. A tenth of restaurants have gone out of business since March 2020, and pubs are closing at the rate of 30 a day. This is not creative destruction, it’s pure ruin.

The lives destroyed will not magically recover. And worse can be more, to mangle Kingsley Amis. At every stage in the government’s panicked response to the pandemic thus far the feeling has been, “they can count: they can’t keep this up much longer” but on they have gone, laying waste to the basic stuff of life. But why will they stop when it polls so well?

Jonathan Sumption has been the rare jurist to note just what an assault the lockdowns have been on personal freedom.

“We couldn’t get away with it in Europe, we thought,” said Neil Ferguson, referring to the imprisonment of healthy people in their homes in China in February, 2020, “and then Italy did it. And we realised we could.”

If we don’t make use of our freedoms, if we don’t again leave our homes when we want, meet up with whoever we choose and move around masked as we will, we’ll be telling the government they can reimpose restrictions whenever their chronically mismanaged NHS is under strain. Which is every winter, forever.

When Matt Hancock announced the rollout of the vaccine programme, he claimed we could “cry freedom” when the most vulnerable groups in our society had been vaccinated. With two-thirds of the adult population now double jabbed, we’ve long passed that milestone.

Yes, we’re in the midst of a “third wave” but, unlike in earlier waves, the link between cases, hospitalisations and deaths has been broken, thanks, in part, to Britain’s world-leading vaccination programme. As Boris Johnson said before he got cold feet about “Freedom Day”, if we don’t start going back to normal now, when can we?

In the same interview in which he used the phrase “cry freedom”, Mr Hancock also said we could look forward to a “great summer”. The former health secretary has ruined lives far and near his own, but serving ministers need to understand enough is enough.