BRIAN Laundrie’s notebook found next to human remains at a Florida nature reserve yesterday may reveal the truth about what happened between him and his slain fiancée Gabby Petito on their ill-fated trip, an ex-prosecutor says.

The notebook and remains were found by police next to a backpack belonging to Laundrie at Myakkahatchee Creek Environmental Park, near the Calton Reserve, yesterday during a brief search with the missing 23-year-old’s parents.

A notebook of Brians was found next to a body[/caption]

Brian’s dad, Chris Laundrie, found a white plastic bag containing some of his son’s items in a patch of bushes next to a trail before police later found the backpack, notepad, and remains, the family’s lawyer Steve Bertolino said.

The remains have not yet been identified but Bertolino said there’s a “strong probability” they belong to Brian.

Neama Rahmani, a former assistant U.S. Attorney and the current president of West Coast Trial Lawyers, told The Sun the notebook and bag will be “crucial evidence” in helping to solve Gabby’s murder.

“Law enforcement found a backpack and notebook, that’s key evidence. It’s certainly likely that those human remains they found belong to Brian Laundrie, unless he was trying to plant evidence next to someone else’s remains to throw law enforcement off his tracks,” Rahmani said.

“If it’s Brian Laundrie’s remains, one of two things happened: He was either killed by an animal or a person or he killed himself.

“If he killed himself, it’s much more likely that he wrote something in the notebook about Gabby.”

He added: “That’s what people who kill themselves often do, they open up about everything so their family and friends know what they had been dealing with before their death.”

‘ALL SIGNS POINT TO BRIAN’

For Gabby’s family, however, the event of Brian’s death would do little to give them closure, Rahmani continued.

“Unfortunately, if Brian Laundrie has died it would make it more difficult to get to the bottom of this case. But there’s no question that Gabby was killed and by far the most reasonable explanation is that Brian Laundrie did it,” he said.

“All signs point to Brian Laundrie. I’m sure Gabby Petito’s family wants some sort of closure, but if Brian Laundrie is dead, this is as good as it’s going to get.

“Law enforcement could hold a press conference to say they believe Brian Laundrie killed Gabby Petito and at that point, they should disclose all the information they withheld until now.

“That’s really the extent of their obligation, law enforcement will have to move on to other cases.”

Wednesday’s discovery marked the first significant update in the hunt for Laundrie for several weeks, following a series of month-long, fruitless searches in Florida and beyond.

The condition of the remains and items found remains unclear.

They had been found in an area that, until recently, had been submerged in floodwaters caused by hurricanes last month.

Brian has been on the run since September 13, two days after Gabby Petito was reported missing by her mother in New York.

Her remains were discovered at a campsite in Teton County, Wyoming on September 19.

A coroner later ruled that she had been strangled to death by a “human force” and that she’d been killed between three to four weeks before she was found.

The pair had been on a cross-country road trip touring the US’ national parks at the time of Gabby’s death.

Brian has not been named as a suspect but is the only named person of interest in the case.

He returned home to Florida without her on September 1 in the couple’s repurposed van before disappearing himself 12 days later.

Brian’s parents initially claimed to have last seen him on September 14 but later revised that date in a statement issued through their attorney.

After finally reporting him missing on September 17, they told police they had driven to the reserve in search of him.

While they say they didn’t find Brian, they did find his silver Ford Mustang and drove it back to their home before contacting the cops the next day.

Chris and Roberta Laundrie are not currently facing any charges in relation to the case.

Gabby was murdered during the couple’s road trip[/caption]

The notebook and bag were found near human remains[/caption] 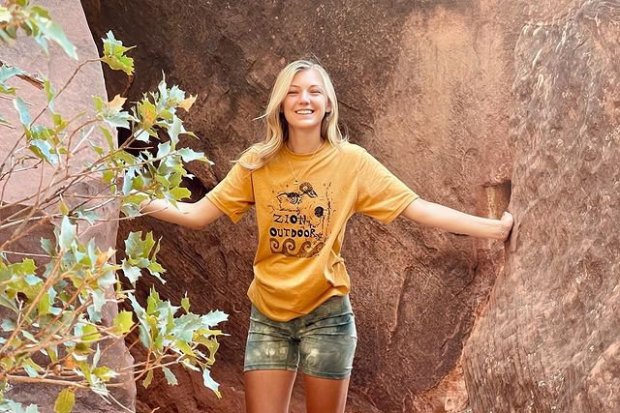 Gabby Petito, 22, was last seen on August 24, leaving a hotel in Utah. Here is a timeline of Gabby Petito's disappearance:

View all posts by Luke Kenton →