BRICS Summit Reaffirms That Russia Not As Isolated As NATO Suggests

The recent BRICS summit managed to run its course this past week with very little fanfare, despite the fact that Russia is in the midst of a conflict with Ukraine that has led to a worldwide economic war. China is edging towards a potential invasion of Taiwan, and much of the planet is in the middle of a stagflationary crisis in the meantime.

The one major takeaway from the summit was the reaffirmed stance of the BRICS that they would continue to work closely with Russia in economic terms. 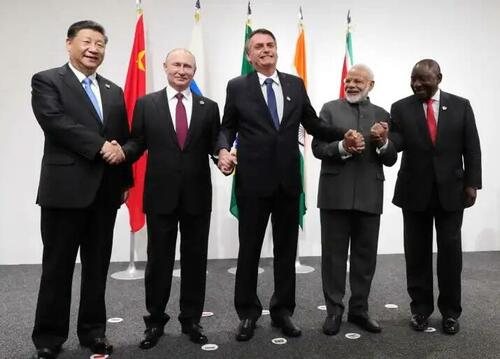 Since the beginning of the invasion of Ukraine, there has been a running narrative in the western media that sanctions and the removal of Russian access to the SWIFT network would crush the country within a few months, leaving them penniless and unable to project military power.  This has not happened.

A picture was painted by journalists and politicians of a completely isolated Russia, destroyed by a global cancel culture campaign that would de-nation them.  In reality, Russian trade, specifically their oil trade, has actually expanded.  Both China and India have increased their purchases of Russian oil while enjoying discounted prices.  Simultaneously, Europe and the US are suffering from oil and gas inflation and the EU is cutting vital oil and gas supplies from Russia.

Any economist with a brain and a familiarity with the BRICS could have predicted this outcome, but the bias within the mainstream media is a powerful thing.  If there were any doubts that the BRICS might distance themselves from Russia, these were put to rest in the BRICS statement on the Ukraine situation.  While supporting humanitarian efforts within Ukraine as well as diplomatic solutions, the BRICS member took swipes and NATO countries for opportunism and instigation.  In other words, there will be no breakup with Russia and BRICS markets will continue to remain open to them.

Further economic escalation could even lead to BRICS allies engaging in trade warfare as well.  The situation has a powderkeg potential beyond anything the world has seen in decades.