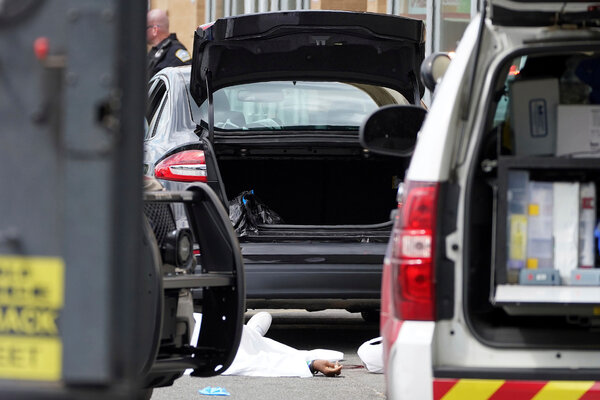 A heavily armed 18-year-old white man opened fire at a supermarket in a largely Black section of Buffalo, killing 10 people and injuring three more, the authorities said, in a racist attack that turned a sunny Saturday into one of the darkest days in the city’s history.

The suspect was identified in court as Payton S. Gendron of Conklin, New York. He pleaded not guilty Saturday evening to first-degree murder, a charge that could lead to life imprisonment without parole.

Mr. Gendron was armed with an assault weapon and wore body armor, the police said, and he had a video camera affixed to his helmet that streamed the shooting live online.

The attack appeared to have been inspired by earlier massacres that were motivated by racial hatred, including a mosque shooting in New Zealand and another at a Walmart in Texas, both in 2019.

A law enforcement official said investigators were reviewing a manifesto believed to have been posted online by Mr. Gendron. It was riddled with racist, anti-immigrant views that claimed white Americans were at risk of being replaced by people of color, an ideology known as the “great replacement” theory. In video and images of the massacre that appeared to have been captured by the camera affixed to his helmet, an anti-Black racial slur can be seen on the barrel of his weapon.

Eleven of the people shot were Black and two were white, the authorities said.

“It was a straight up racially motivated hate crime,” John Garcia, the Erie County sheriff, said at a news conference Saturday evening.

The massacre began around 2:30 p.m., the authorities said, when Mr. Gendron, who did not live in Buffalo and had driven several hours from Conklin, a town south of Binghamton, to get there, stepped out of his car dressed in tactical gear and body armor and carrying an assault weapon.

He shot four people in the parking lot, the Buffalo police commissioner, Joseph A. Gramaglia, said at the news conference, three of them fatally. When he entered the store and continued shooting, he encountered a security guard — a retired Buffalo police officer who returned fire. But Mr. Gendron was wearing heavy metal plating; he killed the guard and continued into the store, firing on shoppers and employees.

When Buffalo police officers arrived and confronted Mr. Gendron, he put a gun to his neck, but two patrolmen persuaded him to drop his weapon and surrender, Mr. Gramaglia said.

The United States attorney in Buffalo, Trini E. Ross, said her office would investigate the killings as hate crimes. Stephen Belongia, the special agent in charge of the F.B.I. Buffalo field office, said the shooting was a “case of racially motivated violent extremism.”

The mayor of Buffalo, Byron W. Brown, said that he and his family periodically shopped at the store, an outlet of the regional chain Tops Friendly Markets. “Some of the victims of this shooter’s attack are people that all of us standing up here know,” he said, surrounded by the political and law enforcement leaders of the city.

The attack took place in a neighborhood known as Masten Park on Buffalo’s East Side. Dominique Calhoun, who lives within sight of the Tops supermarket, said she was pulling into its parking lot when the shooting happened.

She said she saw people running out and screaming, so she parked across the street. She was with her two daughters, 8 and 9 years old, and the three of them had planned to buy ice cream.

“That literally could have been me,” she said of the people who were killed.

At the crime scene, Barbara Massey Mapps waited anxiously outside the police tape for news about her 72-year-old sister, who she suspected was in the supermarket when the shooting occurred. “I’ll be here until I see my sister,” she said.

Officials said the camera that the gunman wore was used to broadcast the attack live on Twitch, a livestreaming site owned by Amazon that is popular with gamers. Twitch said it had taken the channel offline.

“The user has been indefinitely suspended from our service, and we are taking all appropriate action, including monitoring for any accounts rebroadcasting this content,” a Twitch spokeswoman said.

Screenshots of the broadcast were circulating online, including some that appeared to show the shooter holding a gun and standing over a body in the grocery store.

Other social media posts showed what was said to be a list of instructions the shooter had made for himself — a to-do list that included “continue writing manifesto” and “test livestream function before the actual attack” — on the messaging platform Discord. The Discord user name matched the name of the Twitch channel.

Federal authorities are studying a statement of purpose that the gunman posted online, according to a senior federal law enforcement official who spoke on the condition of anonymity because he was not authorized to disclose details of the investigation.

The document, which circulated on the online message board 4chan, compared the gunman’s plan to other mass shootings motivated by bigotry and promoted the “great replacement” theory.

He wrote that he would use a GoPro Hero 7 Black to “livestream the attack on Twitch,” which he chose so “all people with the internet could watch and record.” He noted that the shooting at a Jewish synagogue in Halle, Germany, in 2019 was also live streamed on Twitch.

He then detailed over more than a dozen pages what tactical gear he recommended for similar attacks, including knives, vests and medical equipment. He said that “conservatism is dead” and that progressives’ advocacy for equality was wrong because, he claimed, the average Black man had a lower IQ than a White man.

Gun deaths reached the highest number ever recorded in the United States in 2020, the first year of the pandemic, surging by 35 percent, the Centers for Disease Control and Prevention reported on Tuesday.

“This is a historic increase, with the rate having reached the highest level in over 25 years,” Dr. Debra E. Houry, acting principal deputy director of the C.D.C. and the director of the National Center for Injury Prevention and Control, said at a news briefing this week.