Back in 2020, we sketched out the monetary endgame as follows: the Fed – along with all other central banks – was rushing to roll out a CBDC (digital dollar) so that when the next crisis hit, it could then directly deposit said “Digital Dollars” directly into the accounts of each American – or at least those Americans the Fed found worth of such stimmies – to offset a deflationary bust.

ICYMI: The Fed Is Preparing To Deposit “Digital Dollars” Directly To “Each American” https://t.co/etmxda3xkv https://t.co/gIZgWbJfkp

Well, fast forward to today when it now appears that such a digital money paradrop may be about to take place… only not in the US which remains behind the curve in CBDC development and adoption, but in China.

As Bloomberg’s Ye Xie writes, “imagine that a government pays its citizens to take a one-month vacation with the condition that they have to stay at home. In some ways, it’s not to dissimilar to what the U.S. did at the onset of the pandemic. Thanks to generous paychecks from Uncle Sam, American consumers weathered the pandemic largely unscathed, which helped ensure a swift economic recovery.”

Ironically, while this was an approach that Beijing harshly criticized for fanning goods inflation and fueling asset bubbles, now – with its own economy probably contracting and job losses mounting under the Zero-Covid policy – a growing number of economists are calling for China to adopt similar cash handouts. The difference is that this helicopter money would be in the form of the digital yuan, which would allow the PBOC to control when and how residents can spend it.

Precisely what we said would happen in the US… had the Fed been the first to the CBDC finish line.

According to Xie, premier Li Keqiang hosted a meeting on stabilizing markets and jobs on Wednesday, calling for government agencies to act with a greater sense of urgency and implement policies as soon as possible. He said there’s room for further policy easing.

To be sure, while Beijing has talked a lot, its actions have so far been woefully inadequate to offset the double whammy from the housing slump and Covid disruptions. Goldman Sachs’ activity indicator slowed to annualized -10.9% in April, the lowest among major economies. The bank cut its forecast for China’s GDP growth this year to 4% from 4.5%. 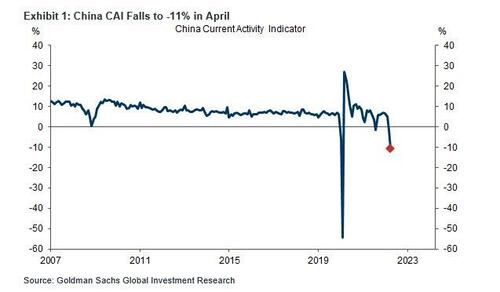 On the other hand, Authorities have been easing monetary policy. And in fact, the banking system has been flooded with money, with the seven-day repo rate, a measure of interbank borrowing costs, dropping to 1.6% from 2.2% in March. But the money hasn’t been funneled into the economy because of the lack of credit demand from households and business amid increasing uncertainties. Instead, money is stuck in the financial system. That allows bond investors to take advantage of cheap money to add leverage, sending trading volume in the repo market to a record. The money supply also puts pressure on the yuan. In other words, the transmission mechanism of the monetary policy is broken. 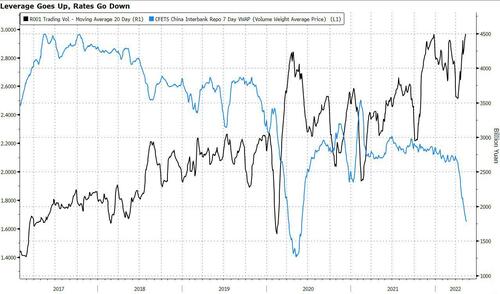 That’s where the digital yuan comes in. The PBOC could “drop” money into people’s digital wallets, according to Adam Wolfe, an economist at Absolute Strategy Research. That would help tide consumers over during Covid lockdowns, compensating them for lost income. The beauty of the e-CNY is that the PBOC can set an expiration date, and determine which goods and services the money can be spent on, so that the cash won’t be saved or spent on financial speculation.

“If done alongside economic re-opening, that might generate a swift recovery,” Wolfe noted.

China has been far ahead in experimenting with the digital currency than some other nations. Xinhua reported that more than 10 cities, including Shanghai and Shenzhen, have tested use of it since 2017. In April, the PBOC announced that the pilot program would be expanded to more places.

As Xie, notes, “there’s no sign yet that Beijing is ready to go down this route. On Wednesday, Premier Li reiterated that the government won’t flood the economy with stimulus.”

Of course, that doesn’t mean it won’t happen. In his morning notes, Rabobank’s Michael Every picks up on the possibility of digital yuan direct deposits and writes that that is the polar opposite of all Chinese supply-side-pretending-to-be-demand-side stimulus to date: “If it happens, everything changes everywhere all at once. It means higher Chinese growth; but it means higher inflation too; and far higher GLOBAL inflation against a supply-side shock, which would require more of a Fed rates response; and if such local spending also pushes China towards a trade deficit, it also then collapses their currency as the Fed hikes.”