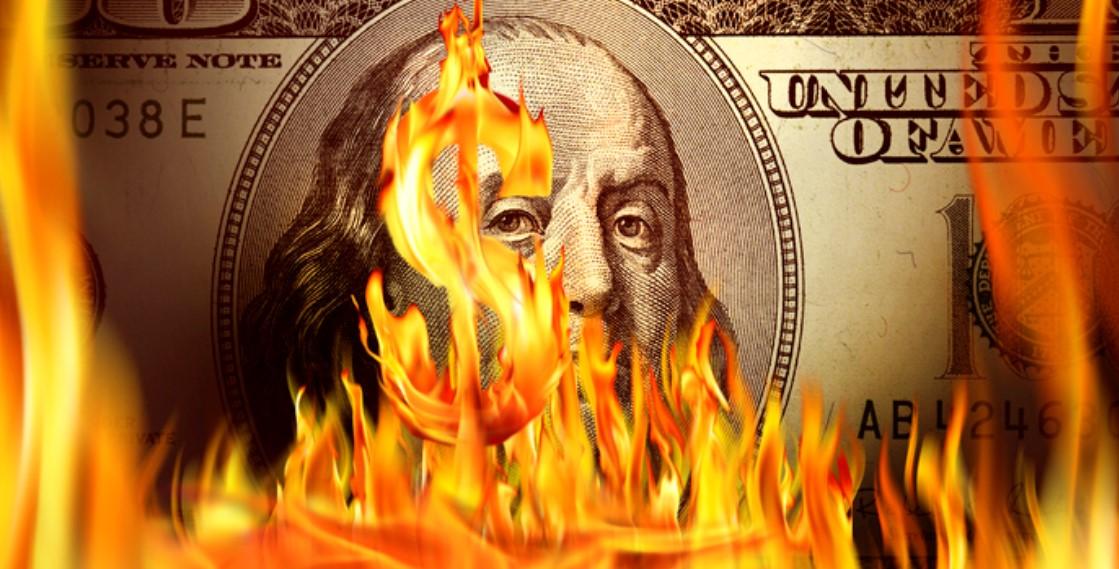 In his book Denationalisation of Money, F.A. Hayek argued that governments have never devoted their power to providing proper money over time. They “have refrained from grossly abusing it only when they were under such a discipline as the gold standard imposed.” The gold backing of the US dollar as the global reserve currency was lifted in the early 1970s, and paper currencies, so-called fiat currencies, have since become the norm. Following this decision, the paper currencies have dramatically lost value against gold (figure 1). Since the turn of the millennium, this process has substantially accelerated.

Figure 1: Gold Price in US Dollars

For the past twenty to thirty years, the Federal Reserve and other major central banks have been steadily lowering interest rates and purchasing large amounts of government bonds as well as other assets such as corporate bonds and asset-backed securities. This has undermined the confidence in the US dollar and the euro as the world’s leading reserve currencies. A flight into tangible assets has set in, such that stocks, real estate, and precious metals have risen sharply in price. Competitors for the “exorbitant privilege” (Giscard d’Estaing) of the reserve currency have appeared, as those who issue the global reserve currencies benefit from virtually unlimited borrowing opportunities and immense profits from money creation. The competition has three dimensions.

Firstly, decentralized private digital currencies have emerged in contrast to the public monopolies on creating money. Anyone can create (mine) the pioneer bitcoin, but the supply is credibly limited. The exchange rates to paper (fiat) currencies float. Unlike the fiat moneys, which are based on the traditional banking system, payments are cryptographically legitimized and do not require a central intermediary. Other cryptocurrencies (decentralized or centralized) such as ether, ripple, tether, and dogecoin have been created (“altcoins”), but they are considered only more or (mostly) less equal to bitcoin in terms of credibility. The sharp increase in the value of cryptocurrencies measured in fiat currencies (figure 2) indicates that—despite strong fluctuations—many people trust in their store-of-value function.

Figure 2: Price of a Bitcoin in US Dollars

Secondly, a consortium of private companies around the internet giant Facebook intends to join in the competition for the money monopoly. In contrast to many cryptocurrencies, diem (formerly libra) is to be pegged to the US dollar (or the euro). It is therefore referred to as a “stablecoin.” The credibility of this peg is essential for the credibility of stablecoins, akin to bank deposits and money market fund shares. The popularity of Facebook could provoke a rapid spread of diem. The advantage of diem could be that international payments require no intermediaries and are cheaper. Especially for many people in developing countries who do not have a bank account, diem could be attractive. If one day the currently announced fixed exchange rate were to be relaxed in favor of a gradual appreciation path, the incentive to exchange US dollars or euros for diem would be great. Part of the seigniorage of the Federal Reserve, the European Central Bank (ECB), and other central banks could then go into the pockets of Facebook and Co.

Thirdly, competition for the exorbitant privilege also seems to have emerged among paper currencies. Up to now, all major central banks had expanded their balance sheets in tandem with the Fed, such that competition among fiat currencies was de facto suspended. Yet China, which has long resented the US dollar’s reserve currency status, may now back out of this arrangement. Many trade and financial transactions in East Asia are settled in US dollars, and the currencies of the East Asian countries are still pegged to the greenback. Whenever the Fed expands the money supply through purchases of US government bonds, the central banks in East Asia are compelled to buy US dollars. In this way, they help finance US government spending—e.g., expensive bailouts on the financial markets. Ronald I. McKinnon spoke of a quasi-unlimited credit line for the US, which is increasingly viewed with suspicion in East Asia (“the unloved dollar standard”).

Since 2014, China has been gradually reducing its holdings of US government bonds (figure 3). Instead of holding US government bonds, investments were made in infrastructure in developing countries and, like Russia, China increased its gold holdings (figure 4). In addition, the balance sheet of the People’s Bank of China has been growing at a much slower pace than that of the Fed. This was especially true during the corona crisis, in which the Fed again greatly expanded its balance sheet to stabilize the US economy. For the past year, an appreciation trend of the renminbi against the US dollar has been observed, such that the incentive to exchange greenbacks for renminbi is growing. Similarly to Germany and Western Europe in the 1970s, China and the neighbors with which it is strongly intertwined economically could break away from the US dollar. Moreover, China has rushed ahead with the development of a digital renminbi whose payment system could undermine US supremacy in international financial transactions.

Source: World Gold Council. Note: there is controversy about the real gold holdings.

However, the major central banks will not stand idly by and watch this competition. The ECB and Fed are working intensively on the development of their own central bank digital currencies (CBDC), which may enable decentralized payments outside of commercial banks. If citizens were skeptical of digital euros and dollars, strict regulation or even a ban on private cryptocurrencies could foster the popularity of central bank digital currencies. Warnings from key central bank officials such as Christine Lagarde and Andrew Bailey that cryptocurrencies are used in shady transactions and carry the risk of total loss do not appear to be a sufficient deterrent. The People’s Bank of China has already banned cryptocurrencies as a means of payment.

The outcome of this race is uncertain. What is certain is that the credibility of the leading fiat currencies has suffered substantially. Their instability has fueled crises and weakened growth, so the demand for an alternative store of value is high. Who will hold up best against the public currency monopolies of the dollar and euro will likely depend on the quality of the underlying technology (bitcoin versus altcoins) and the influence of the institution behind it (Facebook versus People’s Bank of China). Among the prominent competitors only bitcoin seems to have a built-in stability and thereby a built-in credibility. The upcoming reduction of transactions costs could finally strengthen bitcoins function as medium of exchange.

But perhaps, in the face of growing competition, the major central banks will return to the virtue of monetary stability. At the end of the high inflation phase of the 1970s, Paul Volcker, as the new Fed chairman, broke the back of inflation with sharp interest rate increases. This also secured the international reserve currency status of the US dollar, which had become challenged by the German mark. Now bitcoin or the Chinese yuan could take over the role that the German mark had in the 1970s. If this were to happen now, it would be evidence of the disciplining effect of currency competition as suggested by Hayek.