Demand destruction is when prices get so high that consumers are hit with an affordability crisis. That is precisely what is happening with the used car market.

New earnings data from CarMax, the nation’s largest retailer of used cars, showed the number of used vehicles sold for the quarter ending Feb. 28 declined 6.5% while prices were at record highs. Average car prices rose 40% during the quarter, or $8,300, compared with a year ago.

A substantial increase in used car prices over the last year and the recent surge in interest rates could be the catalyst for what has recently sparked demand destruction as buyers go on strike, thus cooling red-hot prices.

“From an affordability standpoint, you’ve got interest rates going up, inflation, you’ve got the Ukraine-Russia war. There just a lot weighing on the consumer right now.

For “the lower credit spectrum customer, certainly, we feel affordability has maybe often priced them out of the market,” Bill Nash, Carmax’s CEO, told investors on a conference call.

Last week, the Manheim Used Vehicle Value Index, a wholesale tracker of used car prices, dropped 3.8% in March from February, the largest monthly decline since April 2020 (only Feb 2007 and two prints in the fall of 2008 were worse before that). 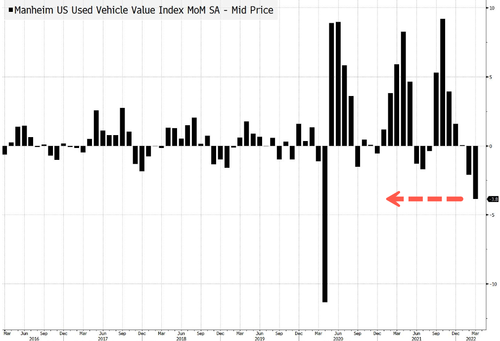 Slumping prices may reveal stressed-out consumers are taking a step back from the market as interest rates rise.

Demand destruction is happening at a critical inflection point for the used car market. We’ve pointed out the emergence of this economic phenomenon since early February (read: here & here). Last Friday, we asked: “Are Used Car Prices About To Peak For Real This Time?”

Given that used vehicle price significantly contributes to the overall headline inflation rates, this could also be a sign of peak inflation. Today, Goldman Sach’s Jan Hatzius told clients that March core CPI has “likely peaked.”

Also, DoubleLine Capital CEO Jeffrey Gundlach told CNBC that inflation has peaked, but pressures will remain persistent as he believes the Federal Reserve is behind the curve.

So what does this mean for readers? If you have a used vehicle you were probably thinking about selling, now is the time to do so. Consumers looking to purchase a used car may want to wait for prices to move lower.