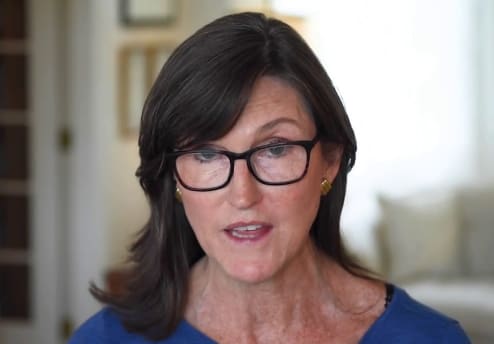 At least, I think that’s how the old expression goes.

On my last podcast, while ranting in a stream of consciousness about Cathie Wood and her firm, Ark Invest, I brought up an interesting point that nobody on the financial news networks, or any of her investors, seem to notice: without Tesla’s raging (and mysterious) success, there is no Cathie Wood success story.

Sure, you’ve heard this one before from me, but bear with me.

And don’t get me wrong, I have defended Wood’s success more than once, including when Vanity Fair’s William Cohan labeled her a “charlatan” on a podcast I did with him. I want to give credit where it is due because, even if Wood is a one trick pony, she has brilliantly wound up parlaying that one trick into billions of dollars under management. Hell, even Madoff must have had some decent organizational and marketing skills.

But at one point during my last podcast, I wasn’t feeling as charitable.

Rather, I kept arriving at the one key question any potential investor in ARK’s Innovation Fund should be asking themselves: how have Cathie Wood’s returns been, without the help of Tesla? After all, Tesla is only one component in an ETF that holds dozens of names. You can find the full list here.

Over the last year, the market has started to understand why asking about Wood’s other positions is such an important question.

What should be worrisome to Wood’s investors is not only that her flagship fund has vastly underperformed the major market indexes by about 39%, 36% and 31% for the S&P 500, Nasdaq and Dow Jones, respectively, year-to-date…

…but also that it has done so while her flagship ETF component, Tesla – weighted at a monstrous 10% of ARKK – has done nothing but go up. Specifically, ARKK is down 1% over the trailing twelve month period while Tesla has posted gains of over 112%.

In other words, Tesla has been saving ARKK from a complete and total meltdown.

It is underperformance that only a visionary “active manager” could put together.

I’ve also noted on my podcast that when investing in companies that don’t generate cash, managers like Wood seeking capital must dutifully make their way on to CNBC and not only offer excuses for when these stocks go down, but more importantly, excuses for why in the everloving fuck they are going up.

No, people want to know exactly why the stocks of growth companies are skyrocketing. Is the switch from value to growth permanent? Is there some exceptional long-lasting trend that Cathie Wood has the vision to see that we all don’t?

Of course, the answers to these questions are “no”, but whatever excuses Wood and her likes wind up coming up with then becoming a self-fulfilling prophecy of bullshit that entices other “growth investors” (read: 18 year olds with Robinhood accounts) to buy similar speculative investments with terrible, and sometimes non-existent, financials.

Until, of course, the music eventually stops. My guess is this time it’ll be a reverse rotation from growth back to value that’ll do the trick. Such a scenario would look like selling pressure in the NASDAQ while the Dow holds water or ticks green.

In fact, it’s the exact type of action we have seen over the last two days in the market. I even wrote about the trend and what I think it means earlier this week, explaining why I think the market is set to crash heading into the holidays: The Market Could Collapse Heading Into The Holidays

The most important point is that for Cathie Wood specifically, a rotation from growth to value at the same time Tesla pulls back could wind up being a perfect storm that sends shares of ARKK spiraling much lower, in quick fashion, catalyzing capitulation that leads to outsized outflows.

Wood is already seeing outflows in her Genomics ETF, as Zerohedge noted this week, writing that “the ARKG ticker is down 27% year to date and has suffered about $520 million in outflows” this year.

The entire ride up for the last two years, if you’ve been skeptical of Cathie Wood, you’ve been laughed at.

She has been, and still is, held out to be a savior by those who haven’t lost faith in her, her funds or Elon Musk yet. But it is now time for her acumen as a stock picker to be examined closely, given the performance of the components of her flagship fund of late.

And other red flags are popping up. This morning, Wood even said that she would be testing a new, more aggressive strategy that she is referring to as “Ark on steroids”.

Getting more aggressive with your investments after having a shitty year? At the blackjack table or the horse track, we just call that chasing our losses.

Wood and her investors better hope that Tesla does not collapse, and I’m guessing that the number one tea leaf they probably don’t feel like attempting to read is an explanation for Elon Musk selling billions of dollars in stock over the last few weeks.

At first, Musk tried to write his sales off as selling for tax purposes. But with another Form 4 hitting last night for a cool billion in stock, my guess is that other questions will soon start to surface. Namely, complex questions like: “Does the company hiring an ex-SEC and ex-DOJ attorney as its managing counsel for litigation have anything to do with Musk’s stock sales?”

And simpler questions like: “Why would Elon be selling stock if he though Tesla shares were going to continue to go up?”

Regardless, it would behoove Cathie Wood to maybe send an email to her pal Elon and get this cleared up.

After all, Tesla remains the only string that the ARKK fund appears to be hanging on by at this moment. And it feels to me that if Tesla blows up, so does Cathie Wood.

2. Two Reasons The Market Could Collapse Heading Into The Holidays

3. When The Global Monetary Reset Happens, Don’t Forget Who To Blame

4. Pride Goeth Before The Bitcoin Fall

This was a free preview of paid content from QTR’s Fringe Finance. Zerohedge readers always get 10% off a subscription to my blog for life by using this link.